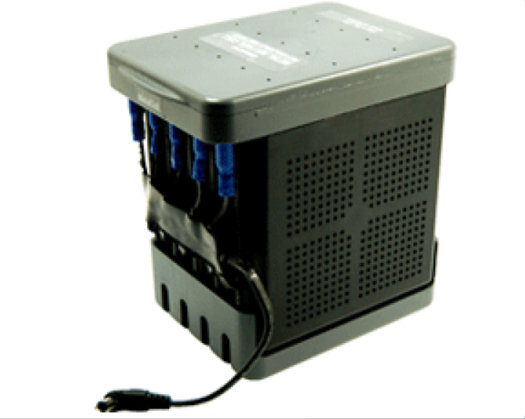 Developed by South Korean researchers, the device is designed for use during warfare, when being able to radio into base can mean the difference between being left for dead blindly or being left for dead intentionally. Or being saved, if you’re lucky. Hey, I watch war movies. They happily leave you behind when you’re a coward or an ass$#$# or refuse to take a bath. Or something like that.

The MetalCell is a ruggedized portable battery with magnesium plates inside its frame. When you need emergency power, simply pour any salty solution (saltwater, pee or any food packed with salt) into the rig. Based on the Baghdad battery technology from 2,000 years ago, the sodium in salt will react with magnesium, creating a dose of low-voltage power that you can use to replenish your electronics. The output is pretty hefty, allowing you to charge a laptop for up to four hours on a single fill of saltwater.

As you can imagine, the benefits for soldiers in the field should be immense, providing on-demand charge for flashlights, radios, radars and various military tech when other power sources are not available. Of course, this will likely prove handy for regular folks too, especially those who love hitting the outdoors with their handhelds in tow or as an emergency power source for your Armageddon-ready vehicle.

The standard MetalCell can be used continuously until the magnesium plates deteriorate and costs $200. A cheaper, disposable version using salt tablets is available too, priced at $125.