One:12 Collective Just Made The Most Awesomely Terrifying Yet Fascinating Popeye Action Figure Ever 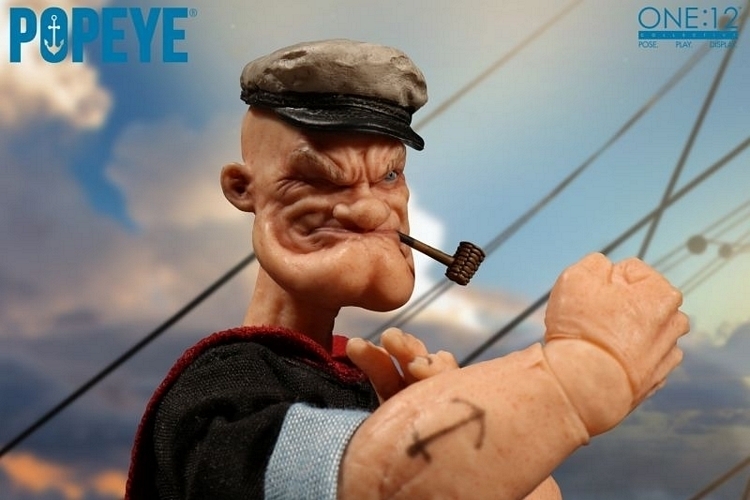 Popeye isn’t exactly the most adorable cartoon character ever made, but he was neutral enough that you can enjoy watching him take on Bluto and defend Olive’s honor over and over. Suffice to say, there’s nothing terrifying about his appearance. Sadly, we can’t say the same thing about Mezco One:12 Collective’s amazing Popeye Figure, which depicts the one-eyed sailorman in realistic scale form.

With his scrunched-up face, pencil-thin neck, and bulging forearms, the character has always been an odd-looking fellow, but the fact that he was drawn in 2D, however, made that strangeness a whole lot more palatable. We don’t have the benefit of that here, as these guys imagined what Popeye would look like if you fashion those same odd proportions in three dimensions. The result isn’t pretty, but it is definitely quite a sight to behold. 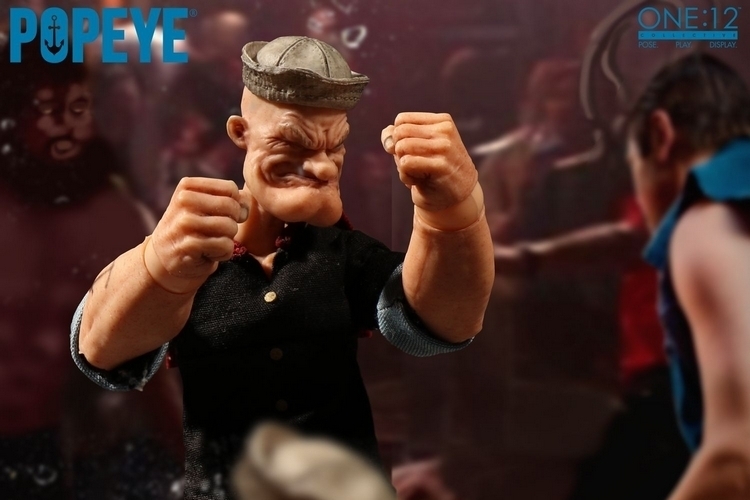 Like other toys in the Mezco One:12 Collective line, the Popeye action figure is an incredibly detailed sculpt of the cartoon sailorman, recreating his Hellboy-grade forearm, his anchor tattoo, and all the creases in his scrunched-up face. It goes one step further actually, as it depicts the character as it would look like if it was an actual person, so there’s plenty of anatomical detail in there that you otherwise wouldn’t find in 2D drawings of the highly-recognizable character, who first appeared in comics back in 1929. According to Mezco, each one is hand-painted, which should account for a good load of that impressive detail.

The Mezco One:12 Collective Popeye Figure comes with over 28 points of articulation, so you can put Popeye in a fisticuffs pose, a double bicep pose after downing a can of spinach, and a whole lot of other positions, making this one highly-poseable action figure. It measures 5.5 inches tall, which should put it close enough to your standard six-inch action figure, allowing you to pit Popeye against your favorite Marvel or DC superhero to see how his spinach-powered strength stands up to a super-powered creature. Just don’t pit him against The Hulk… have some mercy. 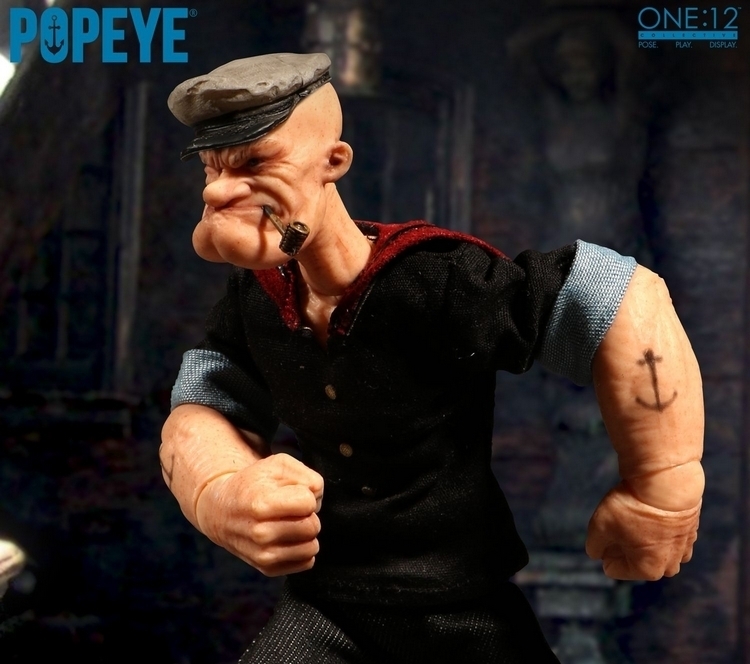 Aside from coming with a detailed sculpt, the action figure comes with two interchangeable heads, seven interchangeable hands, and a gaggle of clothes and accessories. That’s right, you can dress up Popeye like a Barbie. Well, a horrifying-looking Barbie that looks like it’s spent the last five years stranded out at sea. 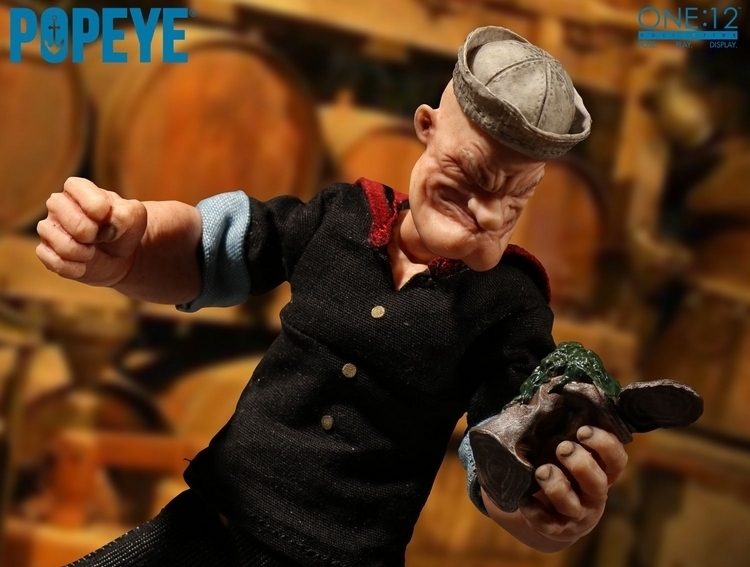 According to Mezco, the two Popeye heads depict a stern glare and a salty glare, respectively, although they honestly look so similar, it’s pretty ridiculous. As with other toys in the One:12 Collective line, the action figure comes with real fabric clothes, so you can feel like a stylist dressing up Popeye for a day out in town with Ms. Oyl. Those clothes include the standard Popeye costume of a tailored black dress shirt, blue slacks, and brown work boots, as well as three hats (a Captain’s hat, a sailor’s hat, and a longshoreman’s hat) and a tailored pea coat for when the weather gets chilly. Accessories include six corncob pipes (three with smoke, three without), two spinach cans, a compass, a spy glass, and a duffle bag. 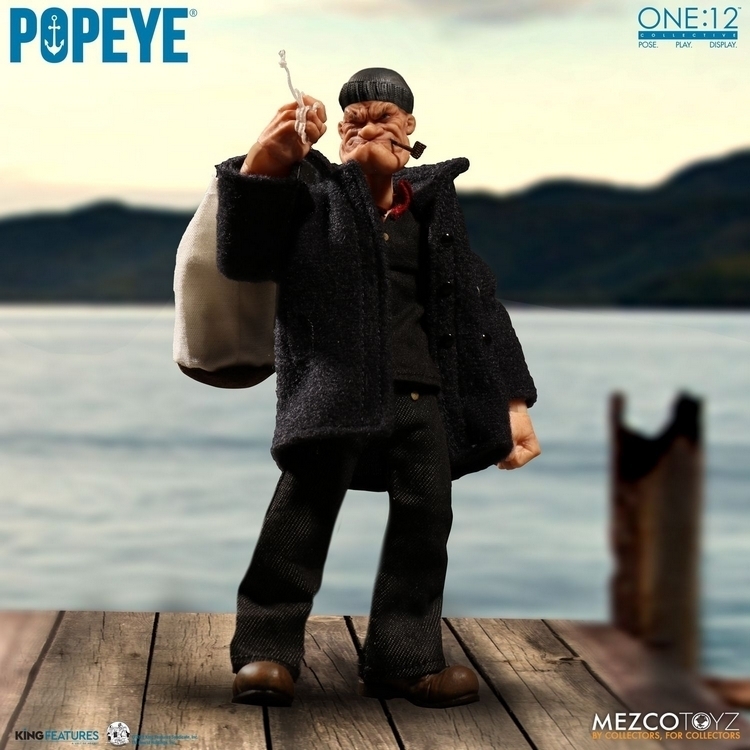 Now available for preorder, the Mezco One:12 Collective Popeye Figure is priced at $80.