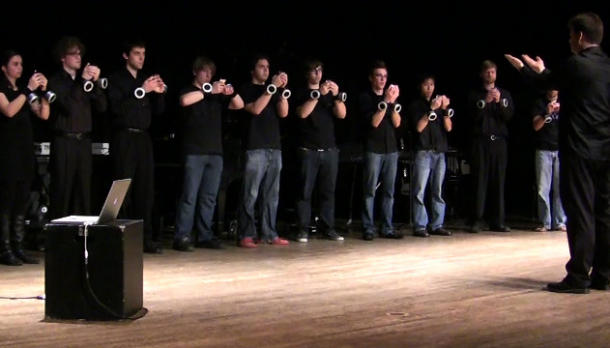 With the iPhone and iPod Touch finding themselves as the platform of choice for a growing range of music-making apps, it’s only natural to see it evolve as a functional stage instrument.  That’s exactly what the Michigan Mobile Phone Ensemble does, using the versatile devices’ range of features to make beautiful electronic music.

Made up of students from the University of Michigan, the entire group comes from a first-of-its-kind fall course that teaches how to turn smartphones into musical instruments.  The subject wraps up engineering principles, software programming and musical performance into one complete package, with the students programming their own devices for a semester-ending concert.

For the recital, the group will rock their handheld gadgets in hand, with custom-built speaker systems worn around their wrists.  Being untethered to traditional equipment and sounds, the students get a wide range of options for instrumentation.  Some will go the standard route, tuning their iPhones to play like regular instruments; others, however, will stretch their chosen platform’s possibilities, using its hardware features like the GPS, accelerometer, mic and multi-touch display to effect “interesting, weird and unusual” sounds.

Although they’re not the first orchestra formed around using mobile phones for music, the group sets itself apart by building their own apps on one of the most powerful handsets around, allowing them to really explore the boundaries of what can be done.  The group’s performance is slated for sometime next week.

The video below, which reports on the class, should give you a hint about what to expect from their upcoming show.