Micro Bluetooth Spy Earpiece Goes Right In Your Ear, Lets You Communicate On The Sly 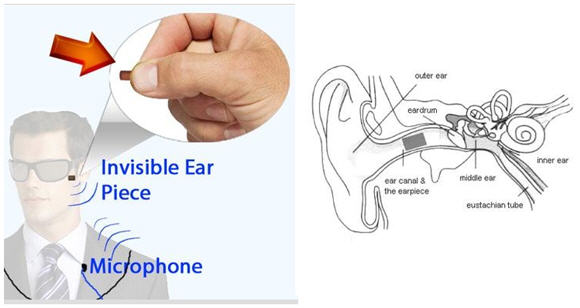 Mama told you never to stick things in your ear.  Well, the Micro Bluetooth Spy Earpiece doesn’t care about that.  Going deep inside your ear canal, it lets you listen to your cellphone’s audio without attracting any attention.

Ever wondered how spies received communication in the field without a visible headset on?  That’s because the receiver isn’t on the ear – the thing’s inside it.  Outfitted for covert audio surveillance, it’s as sly an earpiece as you can get.  Finally, you can listen to your Lady Gaga MP3s without anyone knowing.  Win.

The Micro Bluetooth Spy Earpiece looks just a tad bigger than a grain of rice.  I’m not sure how you’re supposed to slip it into the ear canal, but you can remove it using the included magnets (yep, you literally have to stick a magnet in your ear to fish it out).  Designed to work with all Bluetooth phones, it comes bundled with a neck loop transmitter, a microphone (so you can use it for actual phone calls) and a covert Morse Code device (so you can send silent messages if you’re on a real spy mission).

If you know someone using this, here’s a fun prank to do.  Call them up, let them take the call wirelessly and then scream like a loud pig being slaughtered.  Keep it going for five minutes.  Congratulations, you just introduced your friend to broken eardrums.

People who don’t listen to their mamas and are unfazed by the potential for ear damage can get the Micro Bluetooth Spy Earpiece for $199.95.