Microsoft’s Eckel Anechoic Chamber Is The Quietest Place On Earth 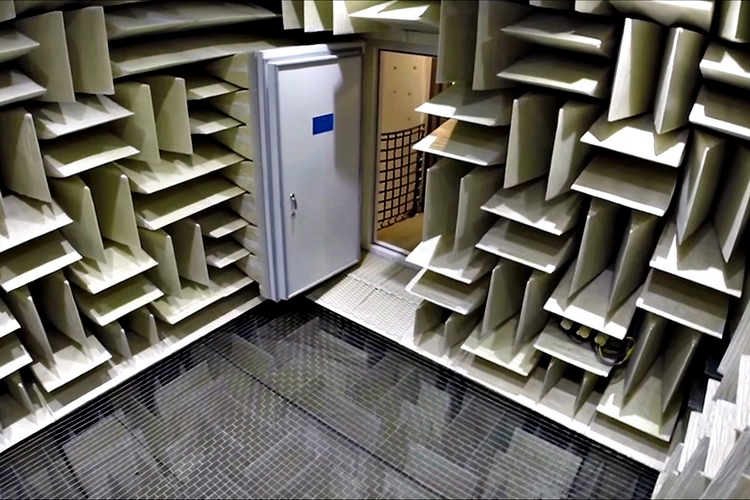 Microsoft just set the official Guinness World Record for the quietest place on earth. They did it with a facility called the Eckel Anechoic Chamber, a special area in the company’s Redmond headquarters that engineers use when testing various audio devices.

How quiet is the quietest room on Earth? Excessively quiet, as it turns out, with an average background noise reading of -20.6 decibels. Yes, less than zero. While a negative decibel reading sounds absurd to the unwashed masses like myself, it’s apparently not, since a zero reading simply refers to the lowest level of sound a human can detect, rather than absolute silence.

The Eckel Anechoic Chamber achieves its impressive feat by fitting the walls, ceiling, and doors in the room with Eckel’s sound-absorbing anechoic wedges, creating a space that’s completely isolated from outside noise with practically zero echo inside. It even has anti-vibration spring mounts to isolate the chamber from the rest of the building’s foundation, so any movements within the structure won’t be felt inside. To give you an even better idea just how quiet the chamber’s -20.6 decibels is, the theoretical limit for the quietest point physically possible is -23 decibels, where only the sound created by air molecules as they interact with each other exists.

While the Eckel Anechoic Chamber is designed for equipment testing, we’re betting it works even better as a torture chamber. I mean, lock someone inside a place where there is no sound other than that of their own breathing and we can’t imagine anyone being comfortable past a couple of minutes.