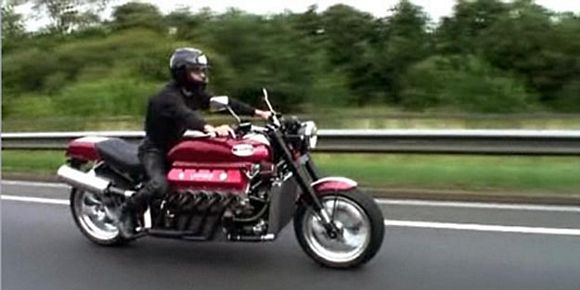 How do you want to die today?  The slogan “Live Fast, Die Young” has never been more appropriate than for anyone who dares take the road with the Millyard Viper V10, a beastly motorcycle drawing its power from a 500hp car engine.

That’s right, someone actually had the audacity to outfit a two-wheeler with an eight-liter V10 Viper engine.  As in, one which came from a full-fledged Dodge Viper.  Death wish?  Probably.  Insanity?  Most likely.  Make sure to check out the video below where the rider stays on a straight path without making a single turn.  Yep, that’s probably how you should use this thing.  Or if you’re going to turn, do it very, very slowly.

Created by Allen Millyard, the Frankensteined (not a real word) Viper V10 features one of the longest wheelbases I’ve seen in a motorcycle (there are ten giant cylinders, after all).  It’s supposedly street-legal (with the ’09 plate to prove it) and is bare basics in true “muscle bike” fashion, packing no special suspension or unconventional design (like a couple other monster bikes before it).

If I was 70 years old and terminally ill, I want a rocket like that on my crotch as my farewell to the world.  Otherwise, you’ll have to put a gun to my head to get me anywhere near that thing.  That’s a stable of angry horses in a lightweight machine – not the smartest idea known to man.

According to the owner, the Millyard Viper V10 motorcycle might be up for sale soon.  Brilliant man, cash out while you’re still breathing.  It’s an awesome machine, but let’s be honest: it’s something awesome and a friggin’ death trap all rolled into one.