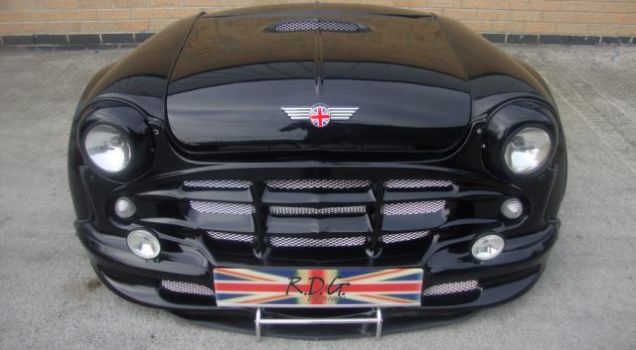 The front end of a car, sawed off from the rest of the vehicle, doesn’t offer much in terms of usability.  That is, unless you turn it into something like this Mini Cooper Entertainment System.

Built by David Gawthorpe, the all-in-one entertainment rig looks like the regular front half of a black Mini when folded up.  Lift the bonnet and pull out the plate, however, and you end up with something entirely unexpected: a pimped-out gaming chair with a whole host of multimedia fittings to boot. 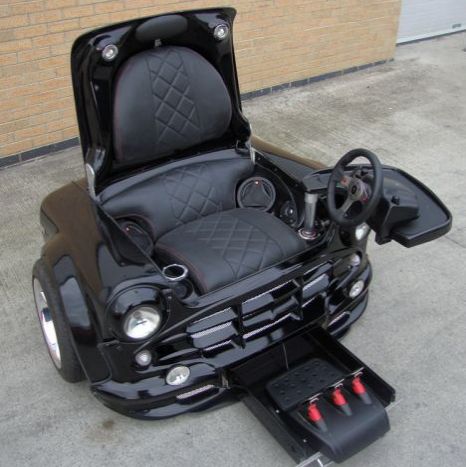 The creator describes the impressive setup as a “theatre-movie chair, a gaming chair, a workstation and a music center” in one sweet bundle.  There’s no onboard TV (you have to plug it into one), but it fits in an Xbox (hopefully, we’re talking about a 360 here), a driving controller (at least, that steering wheel looks like one), a 500W amplifier, stereo speakers and headphones for a complete gaming experience.  Just in case you like your entertainment system with extra flair, it’s got strobe lights, lasers, a remote-controlled smoke machine and a vibration pad that “reacts to bullet sounds,” too.

Since all that gaming can leave you parched, the setup has a small fridge in the back.  Just reach out behind the seat and you can grab yourself a quick beer.  There’s an iPod dock on board, too, in case you’d rather just sit back and chill in your envy-inducing entertainment throne the way any king of the household should.

Only one prototype of the Mini Cooper Entertainment System has been built, which has already been sold to a London entrepreneur. In case you’d like to snag it, the dude reportedly has plans to sell it off at an expected price of £8,000 (a little under $13,000).