Mini-Marshall Amp Almost Lets You Practice Music Without The Noise 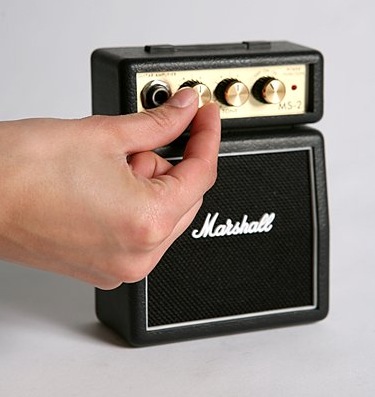 Who out of us never had dreams of being a rock star of sorts when they were younger?  I sure did and had the rig to prove it – a second-hand Les Paul and a Marshall amp, which I’d play on till my mom nearly died from agitation (both from the actual lack of musical skills and the neighbors complaining).  Years have passed and those two remnants of my musical ambitions have since been sold to folks who (hopefully) would put them to better use.

How much easier would my mom’s life would have been if I had an amplifier like this mini-Marshall back in those days?  Designed for those who want to practice without creating much ruckus, it’s a functional component that you can plug your axe into for a few hours of practice play.

Be gentle, though, as  I doubt this thing can take much punishment.  The pint-sized Marshall half-stack creation, despite being a striking replica of the real thing, only packs a 2-watt speaker.   There’s an audio-out port, though, so you can plug in your headphones for some private play, in case you want to break your eardrums without rousing anyone up.

The mini-Marshall half-stack measures a minuscule 4.5 x 2 x 5.5 inches and includes a clip so you can hoist it in your pocket for better mobility.  You can plug it into a nearby power supply or fit in a 9-volt adapter.  At a $62 price tag, I’m sure any parent would be more than happy to buy their musically-inclined (or disinclined) children a piece.