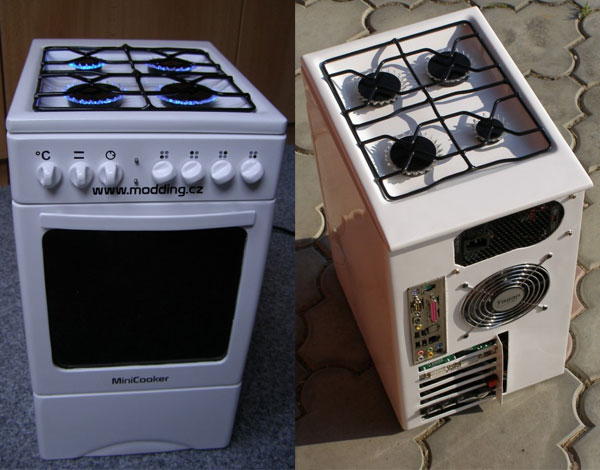 Don’t you ever get tired of the same case designs for desktop PCs?  Either it looks like an ugly box, a garish ugly box or a compact ugly box.  Czech modder Zbyšek probably got tired of it and decided to build his own.  Oddly enough, he decided to house house his computer in a fake kitchen stove.  What?

It may be a strange idea, but one look at the Project MiniCooker PC and everything falls in place – it looks awesome.  Clad like a miniature gas range (it looks just a tad taller than regular tower cases), it comes complete with four cooktops, a set of dials, an oven door and a bottom compartment, none of which do what they’re supposed to, by the way.

Instead, the cooktops are merely acrylic decorations, fitted with blue LED panels around each to simulate gas burners (you can light up each set by turning the corresponding knob). The oven is just a door that opens to an inside view of the PC, while the bottom drawer houses a DVD-RW drive.  Zbyšek built the entire system by hand, creating all custom parts and welding the metal chassis together.

The finished product is a fully functional PC, with a few fun accoutrements around the chassis.  Current machine configuration includes an MSI 975X Platinum motherboard, a 3.5GHz Pentium D820 processor, 2GB of RAM, Nvidia 9600GT graphics and an 80GB HDD.  Yes, I know – who builds such an elaborate case and puts a measly 80GB of storage in it?  Apparently, this guy.

Project MiniCooker PC comes with a full set of ports and expansion areas around the back, just like a regular desktop machine.  It would have been awesome if that oven window became an LCD panel instead, but that may be something for the next iteration.  Detailed photos of the building process and finished product are available from the source link below.