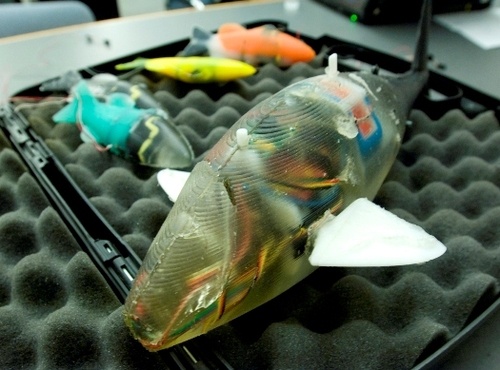 Want to know what’s going to be in your future aquarium? With fish reserves dwindling and their habitats threatened, you may as well content yourself with robot fishes, such as these water-gliding machines that a few MIT scientists are creating.

Designed as a monitoring tool for underwater activity, the synthetic marine animals are being geared for use in industrial applications, like navigating pipelines and sunken ships. Since they’re small, they can take care of entering areas of the water that may prove inaccessible to human drivers and submersible vehicles.

They sound largely uncomplicated too. Each fish measures between five and eight inches and sport a continuous flexible polymer body that keeps water from seeping in. Using just 10 inside parts, it manages to swim in a life-like manner (the 5-inch models reportedly swim like bass and trout, while the largest moves like tuna), allowing it to stride through deep waters fast.

Seriously, they should be selling this thing as a toy. It swims non-stop, sways like the cutest fish ever and looks damn good too (yep, they gave them colors and ornamentation). According to engineers, Kamal Youcef-Toumi and Pablo Valdivia Y Alvarado, they’re cheap to make too. Of course, “cheap” may be relative since this will be produced for industrial purposes. Still, I have a whole lot of money coming in this Christmas and an empty fish tank that I’d love to fill with awesome-looking fake animals. So, what about it?

Check out the video below to see how the “robofishes” swim.