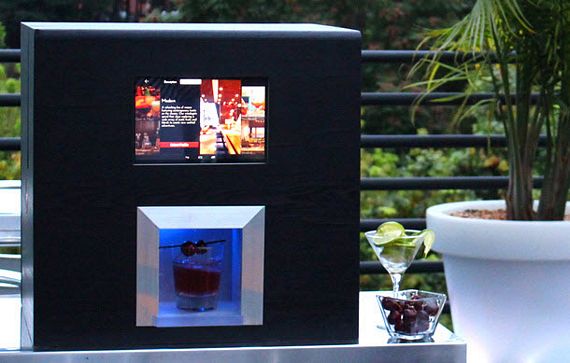 Bartendro makes for a capable drink-mixing robot, but it looks more like a mass of wires than a sleek futuristic automaton bartender.   If we’re going to leave drink mixing to the droids, they best be as affable to look at as the sexy bartender who won’t give you her number from the corner pub.  Granted, Monsieur for Home is nowhere near as easy on the eyes as a sexy bartender, but we guess it’s a good start for a robot.

Just like a proper robot bartender, the device lets you choose from a menu of drinks (with a facility for specifying drink strength — lightweight, normal, boss), then pours the corresponding mix into a glass you place inside the dispenser slot.  No mixing abilities required on your part — just a couple taps on the touchscreen menu and your precision-mixed drink is hosed down, ready to imbibe. 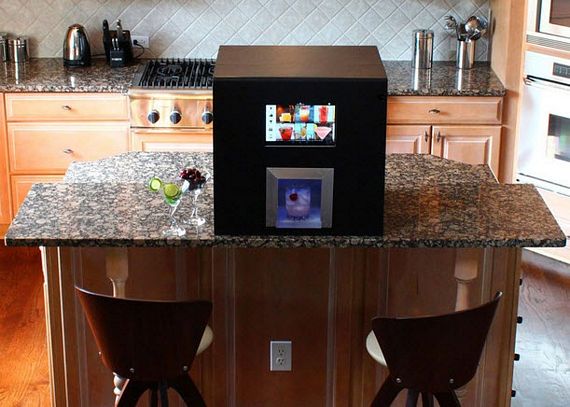 Monsieur for Home is a drink-mixing robot that you can control via a mobile app, so you can have your drink mixed while sitting on the couch and have it ready to drink when you walk into whichever room you have the appliance set up later.   There’s also a slot on the front panel sized to hold a Nexus 10 tablet if you want to set up an independent bartending station for parties.  The appliance comes with chambers for eight 1.5-liter bottles (four for the Mini version), each of which are attached to quick-connect hoses linked up to a pump mechanism.   The system comes preloaded with ingredients for a host of different drinks, all of which can be adjusted to accommodate your personal tastes. 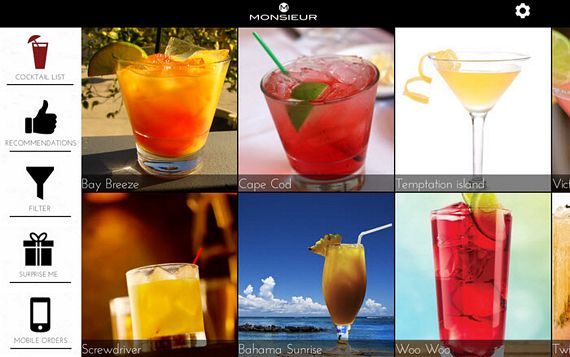 Beyond bartending duties, it comes with a few intelligent features that turn it into a robot butler of sorts.   Armed with WiFi, Bluetooth and Zigbee, it can change things up based on certain parameters, too, like if you’ve had a long day (i.e.. you come home later than usual, so it will make you a double of your usual nightly cocktail) or when your favorite team wins a game (i.e. it can monitor game results and make you a special celebratory drink when appropriate).  Heck, it will even send you an SMS when ingredients are running thin, so there’s little hassle on your part.

Currently, Monsieur for Home is raising funds for a production run on Kickstarter.  Pledges to reserve a unit starts at $2,699 for a standard model and $2,299 for the Mini version.