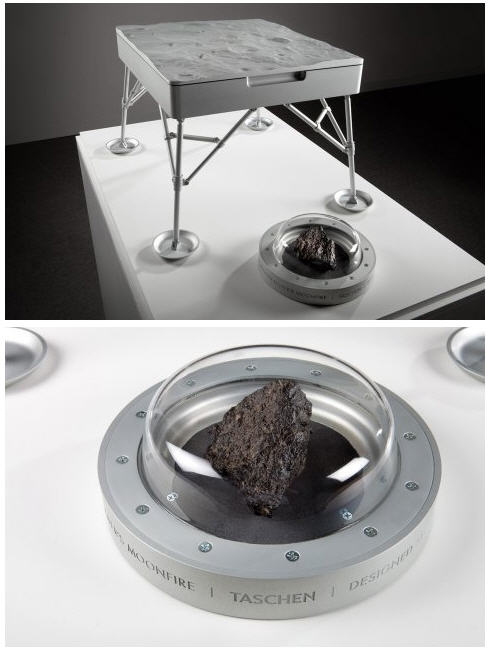 There’s no better way to say “I’m rich, bitch!” than buying a special-edition book for $90,500.  That’s why I’m taking my Lamborghini from my million-dollar mansion, liquidating it on JamesList and grabbing myself a copy of Taschen’s reissue of the Norman Mailer classic, Of a Fire on the Moon.  Which I won’t even read.

Okay.  The above were all lies.  Except for the part where the “Lunar Rock Edition” of Mailer’s epic tale of the Apollo 11 launch – reprinted as Moonfire – costs over ninety grand.   That part is real.

Why the exorbitant price?  The book comes in a single-body aluminum case, sporting a front cover that’s been designed to feature a topographical reproduction of a section of the moon’s surface.  It also gets further Apollo 11 accents, including the struts and feet, making it look like an alien aircraft rather than a coffee-table volume.

The clincher, however, is the piece of lunar rock that comes with each set, housed in a classy-looking case specially designed by Mark Newson.  Only twelve of the Moonfire: Lunar Rock Edition will be released, each with varying sizes (0.4 grams to 30.34 grams) of genuine moonrock specimens.  Why settle for a regular pet rock, after all, when you can have an alien version?

If the thought of an edge-of-the-earth price doesn’t quite float your boat, you can settle for a regular limited-edition reissue (book plus a signed print of Buzz Aldrin, all framed in plexiglass) which goes for the hefty sum of $1,500.  The book, which will be limited to 1,969 copies, comes with 350 pages and four foldouts that feature digitally-restored, original photographs from the historic event.