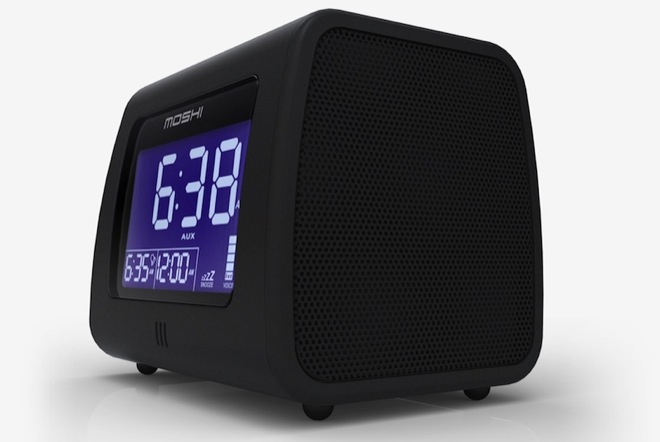 Alarm clocks are good for waking you up. Waking you up cheerfully, however, is another matter. Having to reach for that snooze button is a pain in the backtacular, especially when you’re still groggy from a hazy dream involving strippers, a bath tub and Popeye the Sailorman. This Voice-Controlled Alarm Clock from Moshi should help make your getting-up rituals a little less frantic.

How? Because you can lie still in bed and scream at it to shut its trap. And it will.

The Moshi Voice-Controlled Alarm Clock is equipped with pre-programmed voice commands, which you can use to perform numerous functions you’ll usually need to reach out and push buttons to do, such as finding out the time (just say “TIME” and it will recite it), activating the alarm and punching snooze. It’s non-customizable, so you’re restricted to the predefined sets of commands. That means screaming “SNOOOOOZE” when you want it to shut up for nine minutes and stating “Play Radio” to listen to your favorite AM or FM station.

It’s clad like a regular digital alarm clock otherwise, with an audio port for plugging in your MP3 player, two-channel stereo speakers and a selection of sounds (for either waking or sleeping). Measuring 5.2 x 3.8 x 3.9 inches, it looks like a mini-toaster with a large LCD and speaker grills on the side.

Price seems a bit much at $70. However, struggling to nail that Snooze button could be be such a hassle that it’s worth it. You can buy the Moshi Voice-Controlled Alarm Clock directly from their site.