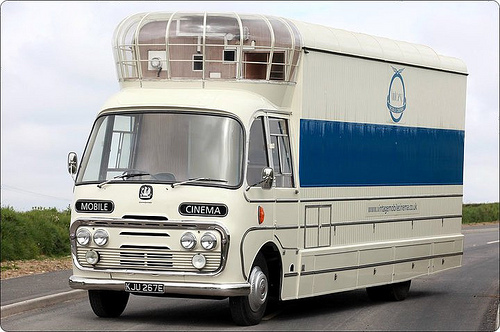 Back in the late 1960s, the UK’s Ministry of Technology commissioned seven Mobile Cinemas, camper-style trucks with the rear converted into a movie theater.  We’re not sure what became of that project, but somebody managed to salvage one of the seven rides and restored it into a fully-functional mini-theater on wheels called the Movie Bus.

Touring the rural roads of North Devon, England since the beginning of the summer, the vehicle is the only surviving one of its kind.  According to the Movie Bus Project, they’re hoping it can bring a cultural and historical experience to the area, especially the most rural of its communities. 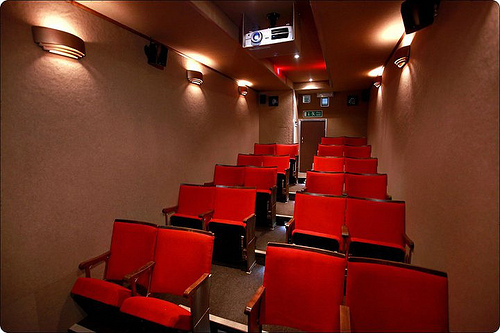 Devon local Oliver Halls and a group of his friends took charge of the restoration, refurbishing the beat-down Bedford SB3 into a state that totally resembles its original exterior when it debuted over five decades ago.  Inside the theater area, it’s been outfitted with 22 vintage upholstered seats (circa 1933) and an entirely modern entertainment system, consisting of an Onkyo TX-NR807 receiver, a Pioneer BDP-320 Blu-ray player, Mordaunt Short Aviano 6 floorstander speakers, a Mordaunt Short Alumni 9 subwoofer speaker, a Mordaunt Short Alumni 5 center speaker, four Mordaunt Short Alumni 3 surround speakers and an Epson EH-TW3500 LCD projector.  There’s installed mood lighting too, so patrons get the full theater experience.

Movies shown include lesser-known films from years’ past and archival footage from the different communities that the bus visits.  Independent filmmakers are being encouraged to screen their work, too.

The Movie Bus Project is currently looking for communities and schools in the area that want to host them, as well as private groups that want to hire them for any events.  The project will continue until 2011.