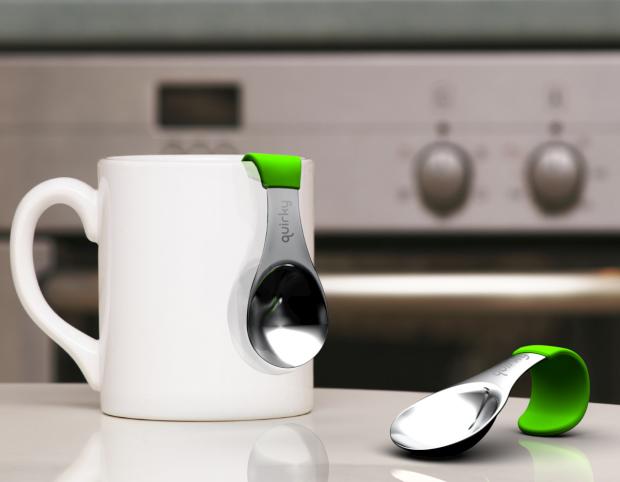 I used to drop my stirring spoon on my mug when I’m drinking my coffee.  Then, I saw a movie where a guy did that and ended up poking his eye out with the end of the spoon.  Arrggh – he became a pirate.

Since then, I always stirred my coffee while standing in the sink.  After I’m done, I would simply drop it in with the rest of the dirty dishes.  Sure, it’s not an ideal solution, especially if you like to sip your coffee with a teaspoon while it’s still very, very hot.

Fortunately, Quirky’s community came up with a crowdsourced fix that’s actually about two brain cells better than what I’ve been doing.  They called it the MugStir and it’s a teaspoon that hangs steadily in your mug.

It’s basically a spoon with a bent rear end, so that it effectively becomes a hook that you can hang by the side of the mug.  The first picture shows the scooping area hanging outside, although it’s actually meant to hang inside (as with the second one above).  That way, you can drink your coffee with no danger of poking, all while the spoon stays firmly inside the vessel.  No more making do without a spoon or setting it down on a napkin. Wickedly cool.

The Quirky MugStir measures 3 x 1.25 x 1 inch (H x W x D), with a spoon area that can hold approximately half a teaspoon of liquid.  The hooked handle is rubber coated, to protect the mug (hey, it could be your favorite Space Invaders mug, after all) from scratches.

Slated to be sold in packs of three, they currently have it on pre-sale over at Quirky for $7.99.  You can buy later after it’s manufactured too, but it will then cost $12.99.