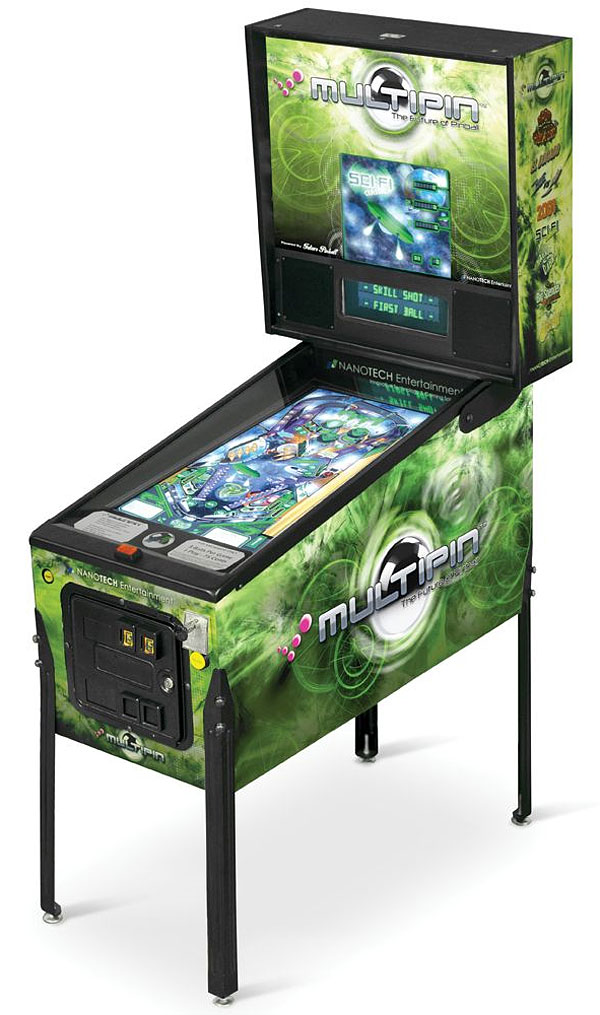 If I wanted to play video pinball, I’d buy a 1000-in-1 sort of game for the PC or the Xbox 360, not a dedicated machine.  Those were exactly my thoughts when I first caught sight of the Multipin, a digital pinball simulator that looks like the real arcade classics of yesteryears.

However, I might still be persuaded.  Let’s see.  It’s sized like real pinball machines, complete with similar physical characteristics, including old-school plunger and flipper buttons.  A 32-inch LCD with 720p resolution shows off classic pinball titles from the 70s and 80s, ably mimicking the physical look of the originals, rather than a patently digital version.  Heck, even the audio experience (bells when you score and voice recordings) mirrors that from the classic mechanical games, thanks to three 100-watt speakers installed in the cabinet.

Want to shake and nudge the box to help ease that ball where you want it to go?  The Multipin comes with digital motion sensors that ably detect them, allowing you to affect your ball’s direction using pure physical prowess.  The backglass holds a second LCD screen that displays scores (in the same old school manner) and changes appearance to match the game you’re currently playing.

It comes loaded with remakes of 17 of the most popular Gottlieb pinball titles from years past, with promise of future update packs to add even more games.  If you’ve been raised on PC-based pinball games and such, this should prove an enlightening experience with those dastardly things that ate young people’s allowance over 30 years ago.

The Multipin is a pretty big rig, posting 46 x 28  x 74 inch dimensions.  It’s also quite hefty in both weight (230 lbs) and price ($6,000).  Obviously, this is being geared for the nostalgic crowd who were pimply-faced teens (or close to it) during pinball’s heyday.  Doesn’t make it any less awesome though.