Mutewatch Puts Some Stylish Tech On Your Wrist 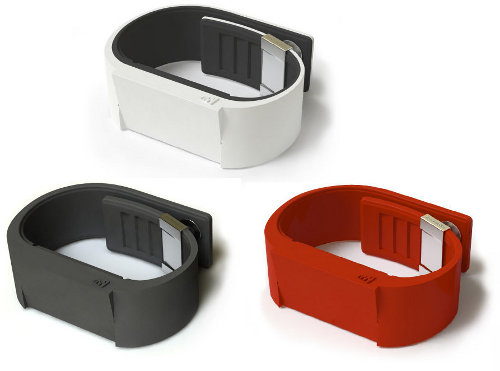 These days, it takes a lot to make a watch look futuristic.  Too much, in fact, since most high-concept timepieces will require ten minutes of figuring out before you can read the time.  The Mutewatch, however, manages to do just that without being cryptic.

Designed to look like a slightly-fancier baller band bracelet at first glance, the timepiece wears a completely blank face.  Until you swipe at the top flat panel, that is, which activates the screen and displays the current time.

That blank face on the Mutewatch is actually a touch-sensitive screen, from which you can set the time (by swiping up and down on each digit) and scroll through the different functions (swiping horizontally switches among clock, alarm and timer).  When you want to dismiss an alarm, all you have to do is pinch the screen.  There are zero buttons on the actual watch body, which also houses a USB-rechargeable battery.

On the product website, they’re billing as a “silent alarm in the shape of a vibrating wristband.”  The description actually makes sense, since having to swipe to see the time does add one extra motion that my $10 Spongebob Squarepants plastic watch doesn’t require.

The Mutewatch looks especially sleek on the photos.  Bear in mind, though, these are renders, so the final product could look a little less stylish.  No word on make for the band and case, but it looks like some rubbery-plasticky compound, similar to most digital watches.  You can pre-order now with a €19 deposit, which will be subtracted from the €199 price when it does ship at a yet unspecified date.