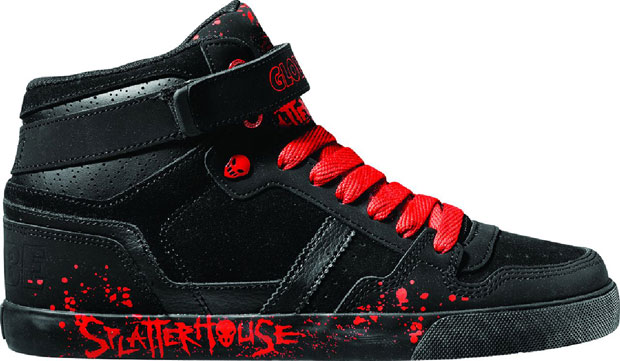 Been waiting for Namco Bandai’s remake of the Splatterhouse game?  You’ll still have to wait till the third quarter of 2010 to get it, but you can let them know how much you’re looking forward to the release by rocking the game’s official kicks.

That’s right, Bandai has teamed up with sneaker company Globe to put out the Splatterhouse Co-op limited series sneakers.  Based off the company’s Superfly skate shoes, the special edition comes decked in unmistakable Splatterhouse branding. 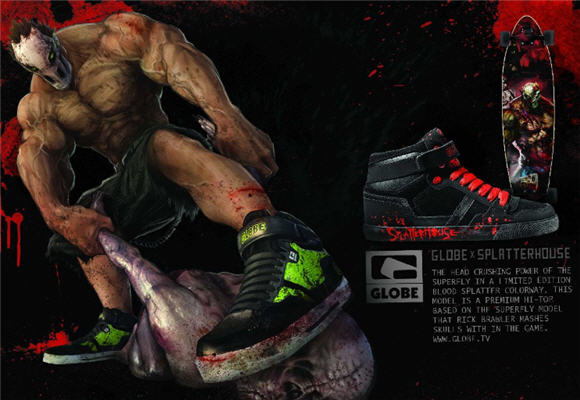 Don’t worry, it doesn’t look like a kiddie shoe. Unless you’re 60 and wearing khaki pants.  Then it would be a bad idea.  Otherwise, the hot-looking sneaks should fit right in with your casual wear.

Like all Superfly models, the Splatterhouse Co-op comes in a high-profile, with leather uppers (action and snakeskin leather), vulcanized soles, Velcro fasteners, rubber outsoles and micro-perforated collar panels.  To go with the theme, it comes in a black and red color, with tiny skulls, the Splatterhouse logo and splattered blood (that, unfortunately, just looks like splattered paint).

According to Namco Bandai, the game is still on track for the planned release date on both the Xbox 360 and the PS3.  The shoes, on the other hand, are available now for $80 directly from the link below.