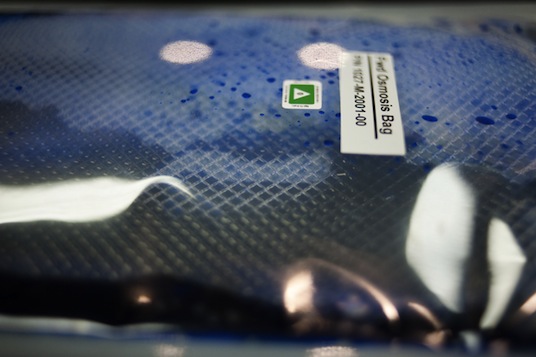 Remember that HBO 24/7 episode where Juan Manuel Marquez drank his own pee while training for a boxing match?  Yeah, it grossed me out, too.  Turns out dude is just ahead of the curve, since astronauts will now be doing the same thing.  Being that astronauts aren’t as tough as Mexican pugilists, though, they’ll be filtering the liquid first using a new portable pee recycling device.

Created by NASA, it’s a textbook-sized kit that will turn urine into a “sugary drink” of sorts.  Unlike the current filtering solution aboard the International Space Station, this new one doesn’t require gobs of electricity to do its job, relying instead on a passive property of fluids called forward osmosis. 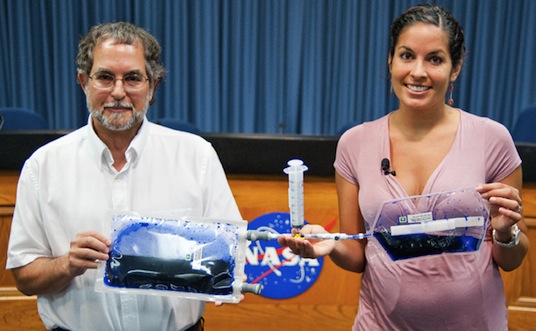 Dirty fluid is transferred to NASA’s waste recycler via syringe.  The actual contraption uses two bags –a semi-permeable inner bag with a sugary solution, nested inside an outer bag.  All the urine in the outer bag will slowly pass through to the inner bag and its solution, with all contaminants being left behind in the outer unit.  Pull out the inner bag (2-liter capacity) after four to six hours and you’ve got yourself potable fluid that looks and tastes like a “sports drink”.   Put it in a Rockstar can and you’ll never know the difference (mmm… maybe).

Four lucky astronauts aboard the space shuttle Atlantis will get first dibs on the recycling device and will be testing it towards the end of their 12-day mission starting end of this week.  Unfortunately, they’ll only be using an “experimental fluid” for now — so it sounds like they’re looking to measure the viability of the procedure rather than the resulting product itself.