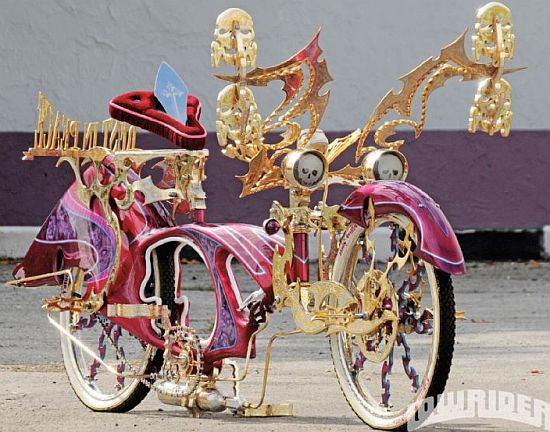 If the Addams family grew up in the midst of Lowrider culture and developed an affinity for the color magenta, this is the bike Pugsley would have gotten on his birthday: the Natural Born Killa.

A custom lowrider created by 23-year old Dany Morales, the bike has been a work in progress for the last fifteen years. He first received it as a hand-me-down from one of his older brothers when he was eight and has been the canvas of his passion since.

Unlike the usual hydraulic setup most lowriders get, the Natural Born Killa was built with the idea of keeping a low weight in mind. As such, no pump and batteries, with wires kept to a bare minimum. Notable mechanical updates include a paintball gun’s CO2 tank for the front air suspension kit, with a 4-inch cylinder and a hidden compressor in the rear. 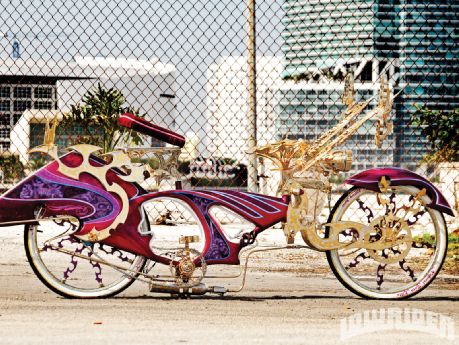 The bike’s appeal, though, is all about the blinged-out body, with its sharp-looking, gold-plated steel parts and skull engravings (with help from New York’s Bone Collector and Eddy Picado), Kandy Magenta and Kandy Purple frame (courtesy of Arizona-based Bugs Auto Art and Karate Studio – yes, “art AND karate”), stylish graphics (from airbrush artist Rick Westcott), chrome and gold 20-inch wheels (Toyshop Customs), engraved skull headlights and numerous other details. Oh yeah, there’s neon tubing in there too, for that ever-scary sight of glowing skulls in the dark.

We’re not sure how much Natural Born Killa costs, but that thing looks like an arm and a leg were spent to outfit it. That, or lots of money. I’d just go with the latter. Dany is based in Miami and supposedly brings this to shows, so you may catch him at a Lowrider event in the area.