NaturMobil One Horsepower Car Is Literally Powered By One Horse 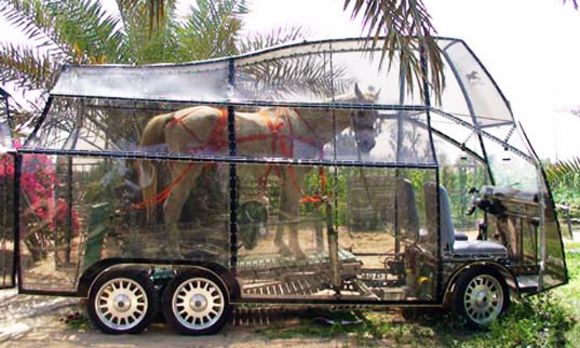 If this is the future of eco-friendly travel, we’re screwed.  The NaturMobil is a motorized vehicle that literally runs on one horsepower – as in, a horse jogging on a treadmill, producing kinetic energy to charge up the car’s battery.  More of a sideshow than an actual environmental solution, it’s one odd ride, to say the least.

Created by Iranian engineer Hadi Mirhejazi, the Naturmobil is a large van-like vehicle that trudges on six wheels.  It seats the driver and one passenger up front, while the rest of the car holds an electronic treadmill and a real live horse.  To make sure people see the fascinating “equine engine,” the vehicle is decked in a clear, perspex-like material.

When starting the car, all the driver has to do is turn on the treadmill, spurring the animal to begin galloping.  As it does, its movement puts twenty connected gears into motion, creating trickles of power (that are then stored into the treadmill’s battery panel) and moving the vehicle forward.  Basically, it’s like getting a horse-drawn carriage (the horse still has to run the rest of the way), with more complex gears and a steering system.  In order to brake, you’ll need to turn off the treadmill, slowing down the horse. 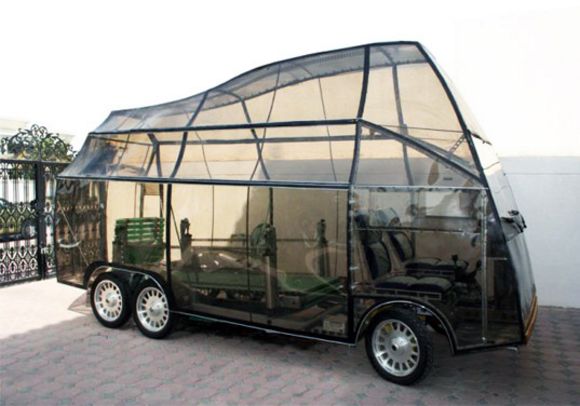 According to Hadi, the NaturMobil was able to reach speeds of up to 28mph during a recent road test.  That’s probably faster than the average for a horse-drawn cart, which, at least, gives his strange invention a much-needed upside.  One major caveat is that it, basically, trades in one gas for another.  Anyone who’s been around horses know they can drool, pee and dump blocks like crazy, so you’re bound to have the stinkiest ride on the block.

Mirhejazi originally planned to take the NaturMobil on a publicity tour around the world, but interest seems to be less than what he envisioned.  He’s trying to drum up publicity by offering the whole shebang (patent, prototype and development cash) to interested parties who can win a strange little contest he is running (the mechanics of which I can’t figure out).