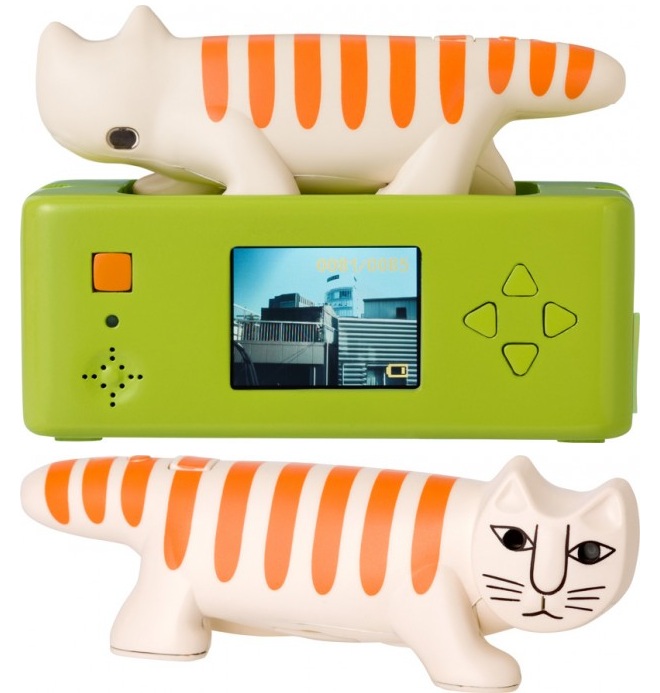 Want to photograph random strangers, but don’t like it when they destroy the candid scene and strike into a pose?  Digitally freeze them incognito-style with the Necono, a plastic toy cat that’s actually a digital camera.

At least, that’s the sales pitch the camera’s creators are going with.  “There is no need to say ‘Cheese,'” according to the product page.  Granted, that’s a terrible reason to buy something like this, but whatever gets you to fork over your hard-earned money, right?

In truth, people are more likely to buy the Necono Cat Camera for its wanton adorable cuteness.  See, this cat-shaped digital camera doesn’t just take photos using the 3.0 megapixel sensor hidden in one of its eyes, it also winks for cue when you trigger the self-timer countdown.  Plus, magnets on the feet allow it to latch onto metal tops, allowing you to stick it to a variety of surfaces for whatever purpose it might serve you (tripods are overrated, anyway).

It also has flash, courtesy of the LED installed on the other eye.  Controls are located right around the base of the tail (shutter, select and mode), with a microSD slot and a USB port hidden on the belly.  In case you want to use it as a webcam (VGA video only), it supports video out via USB.

All nice and cute, right?  Well, that’s until you learn that the Necono is selling for a steep ¥15,750 (around $190).  A dock for the Necono, called Monitor Ground, will also be sold separately, where you can see whatever the cat is shooting from a built-in LCD.