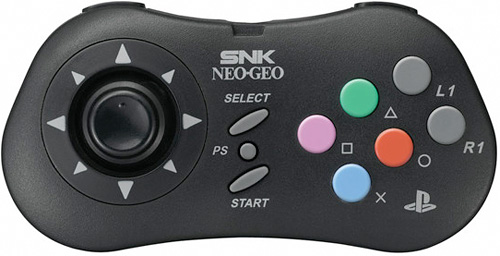 If you didn’t know it yet, a handful of classic Neo-Geo titles are coming to the Playstation Network sometime soon.  To bring some authenticity to the arcade mayhem you’ll be welcoming into your current-gen console, SNK is releasing this: an official Neo-Geo Pad for the PS3.

Designed to offer a similar playing experience to Neo-Geo’s arcade boxes, the controller stays faithful to the masher-friendly layout of their coin-op counterparts.  Of course, some compromises were made to compensate for handheld usability.  Overall, though, this should prove a more fitting accessory for longtime fans of King of Fighters, Metal Slug and similar titles from the company.

The Neo-Geo Pad gets six buttons on the right side, with the additional pair corresponding to the L1 and R1 on the standard PS3 controller‘s shoulder.  Instead of an analog stick or a d-pad, they’re using a disc with four micro-switches, which should make for more accurate movement during fast-paced 2D arcade sequences.

The controller tethers to the console via USB cable (no wireless support), but you’re playing old-school games, so you might as well play it old-school style, right?  We’re not sure if this will work with PC emulators as well.  If it does, though, that certainly makes a stronger case for buying one.

Sure, the Neo-Geo Pad isn’t likely to be of much use for majority of the games you’ll play on the PS3.  For the arcade thrills of classic fighting titles, though, it might just become your default controller of choice.  It should be available sometime this month, priced at $44.90.