Everything You Need To Know About NERF 2016 Fall Blasters Lineup – Exclusive Pics!

It’s an exciting year for Nerf fans.  Not only are they putting out new blasters like they do every year, they’re also introducing a series of new product lines that give the brand an entirely fresh dimension.  Whether you prefer customizable blasters, high-speed foam shooters, or sci-fi themed rifles, this year’s roster brings something for everyone.

Nerf’s long-range blaster line gets two new additions for the year, both of them delivering the series’ vaunted power and performance. And, yes, that’s despite the fact that one of them is styled like a bow, so you can look like a male Katniss or something.

The aforementioned new bow, you load the foam dart on the barrel right above the grip, then tug on the bowstring and release to send the ammo flying out to distances of up to 85 feet.  It’s a firing action that resembles real archery, so you can play Robin Hood, Hawkeye, or whichever badass bowman character you fancy.  Available now, it’s priced at $19.99.

A burly-looking blaster with an aesthetic that came straight out of video games, the Mastodon is the first motorized addition to the Nerf MEGA line.  Foam darts are loaded on a massive 24-dart rotating drum, so you can have plenty of ammo on tap when going into battle. An included shoulder strap makes it easy to maneuver, while an adjustable top grip lets you handle it like a rail gun.  It’s powered by six D batteries and fitted with two tactical rails (one on top and one on the bottom) for mounting accessories.  Available in the fall, it’s priced at $79.99. 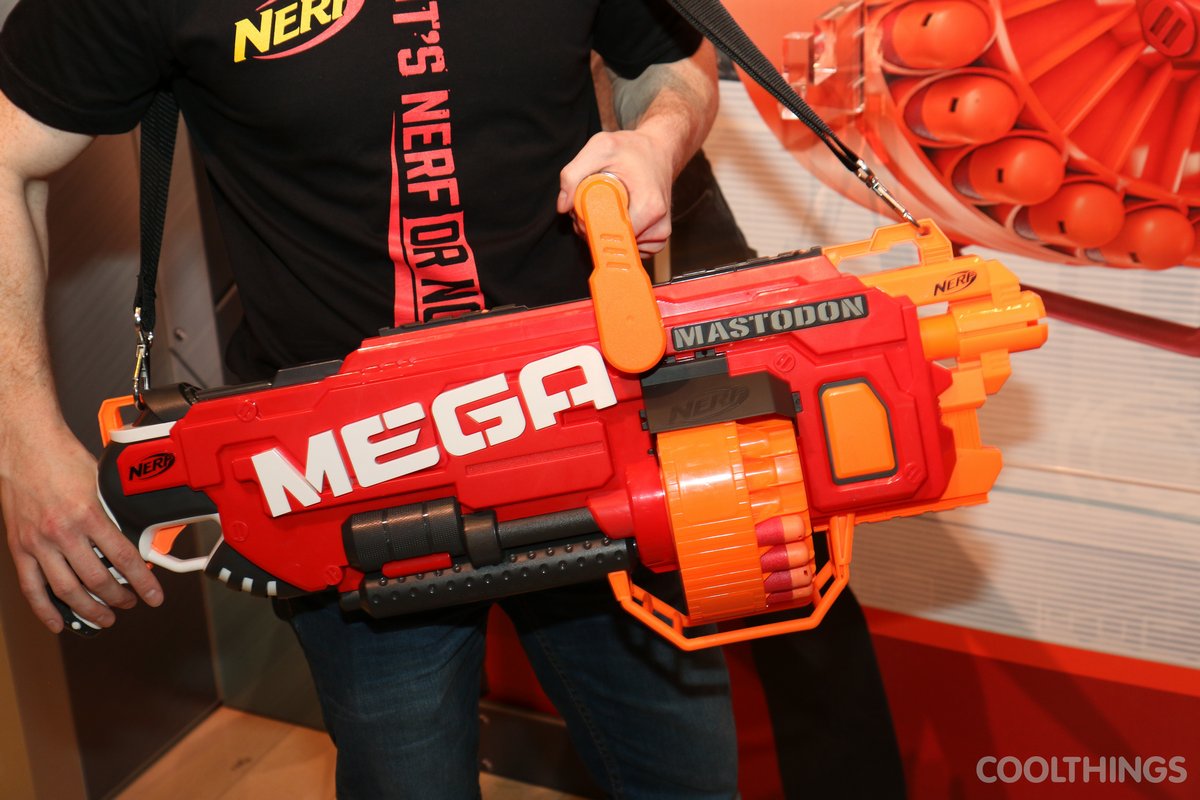 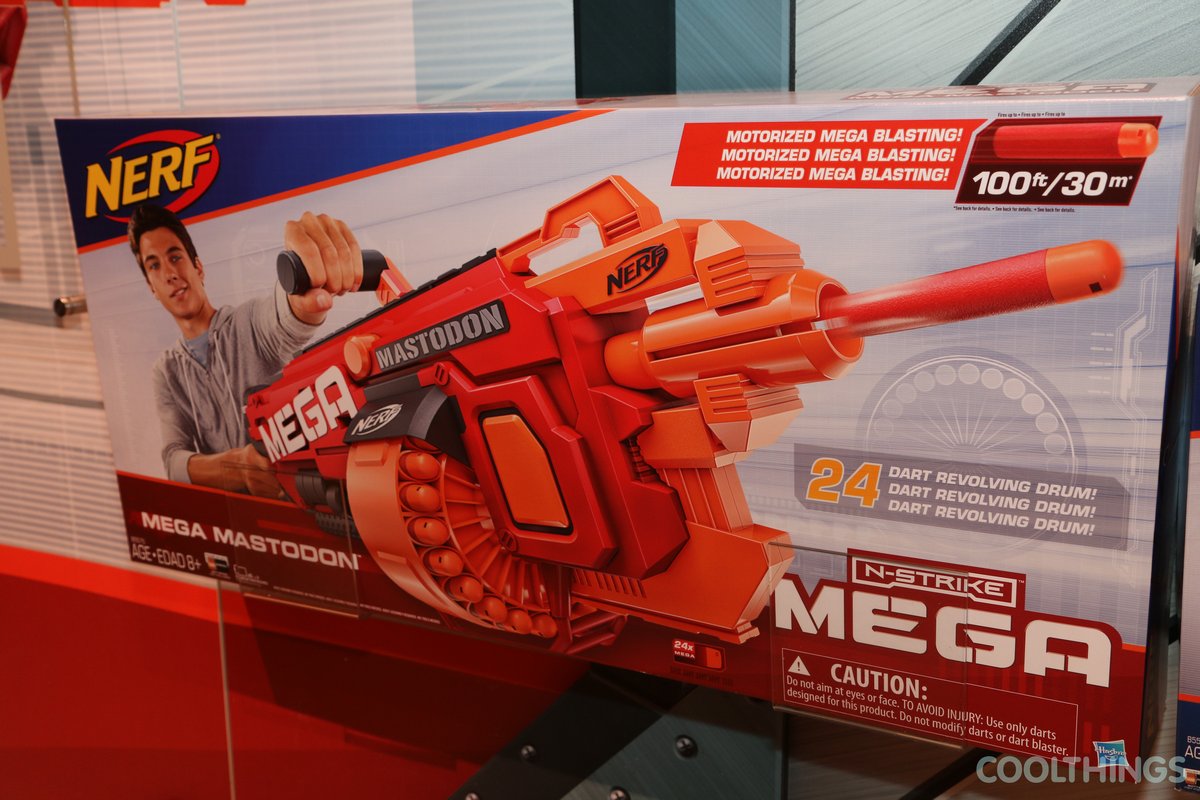 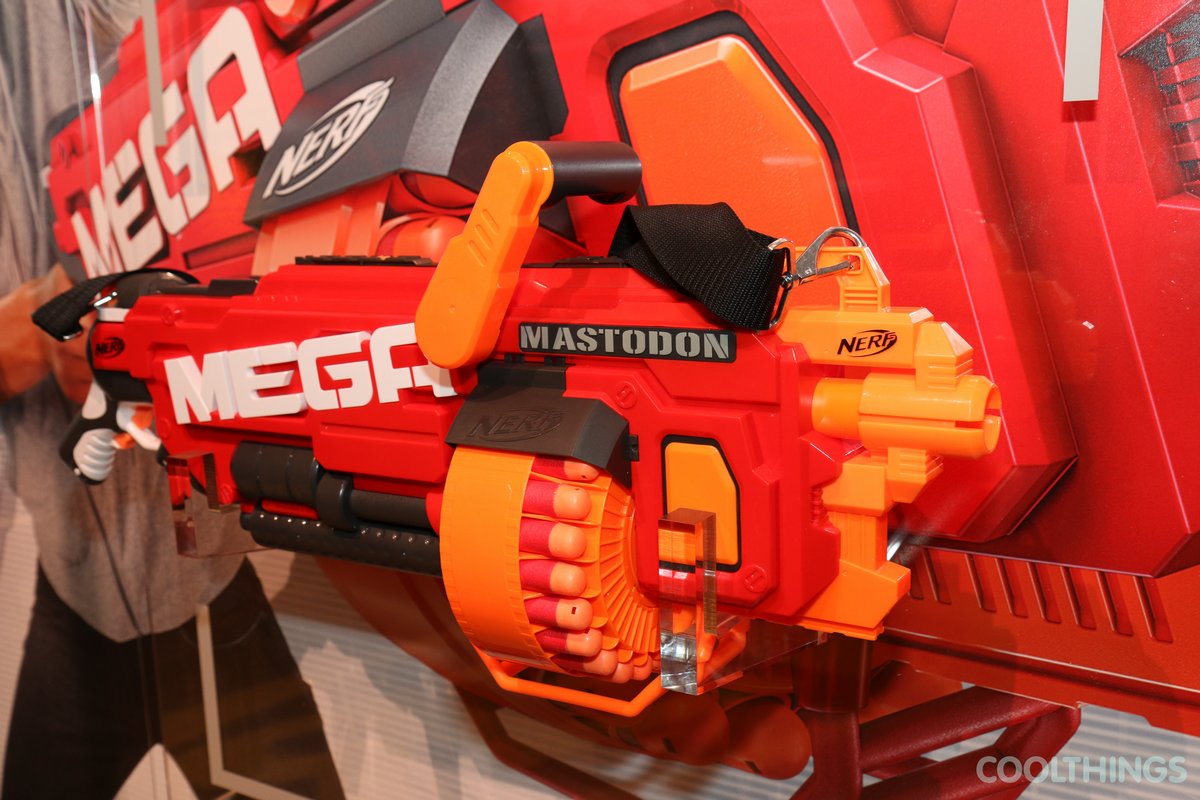 Nerf’s flagship will get some serious expansion this year, debuting seven new blasters that push the limits of speed, power, and ammo capacity.  Simply put, if you want to be armed with the best weapons during battle, these are the blasters you want to bring along.

A compact pistol with a crossbow-style design, it comes with two small arms on the sides that fold down during collapse, along with a foldable sight for accurate aiming.  All three elements are deployed with a quick tug of the cocking lever.  Available now, the Nerf N-Strike Bowstrike is priced at $7.99.

Capable of taking both Elite and Mega darts, this blaster comes with six front-loaded barrels that are sized for three of each type of ammo.  A control on the side lets you switch between firing the two types of foam darts, with a plunger in the rear that you pull back after each shot to prep the next round.  You can get one now, priced at $19.99. 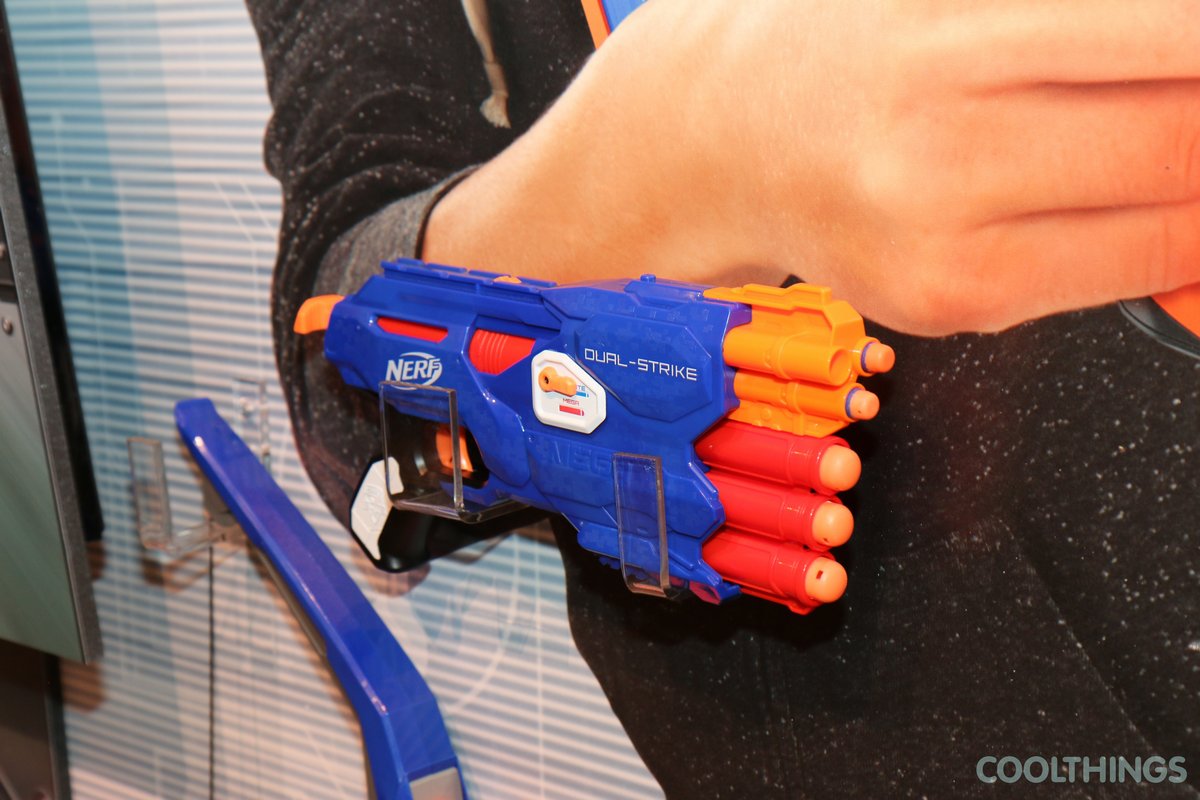 Like other compact blasters, the Glowshot would be ideal for stealthy Nerf battles.  Except, you know, it comes with a glowing body that makes it quite the piss-poor stealth weapon.  A button on the back of the grip allows you to illuminate that translucent green body for a cool nighttime effect, with the light turning off as soon as you let go.  It uses a pair of AAs for the lighting function.  Available now, it’spriced at $7.99.

We’re loving the elaborate design of this bow, which looks badass enough to go in the hands of an archer superhero.   Boasting the highest capacity clip for any Nerf bow, it can hold up to 15 darts at a time, allowing you to go full Green Arrow on your opponent, blasting them with shot after shot after shot.  It hits stores in the fall, priced at $29.99. 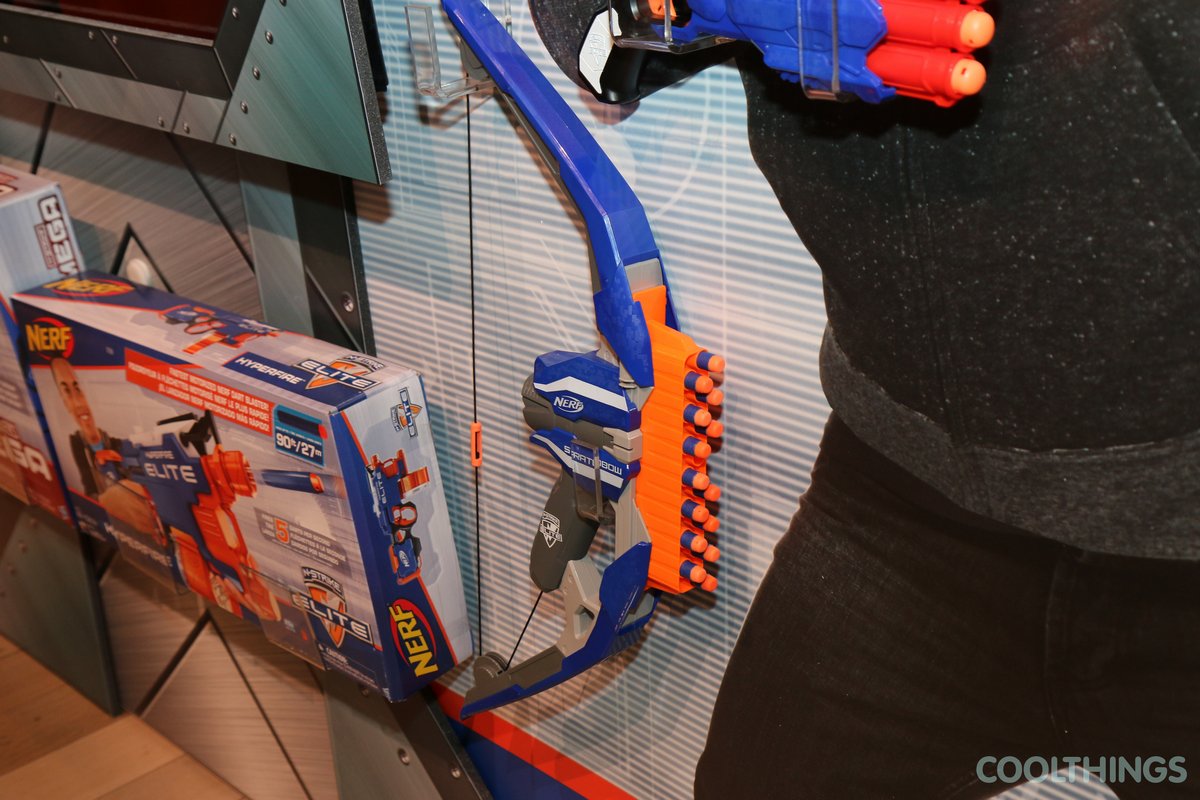 Quite possibly the ultimate stealth Nerf weapon, this ultra-thin blaster is designed to be concealed in your pocket and pulled out to surprise an enemy at the last possible moment.  It’s pretty sleek, making up whatever it lacks in badass looks and ammo capacity with covert utility.  It comes out in the fall 2016, priced at $7.99.

One glance and you know this is one special blaster.  Few of them get to look this menacingly awesome, after all.  Armed with a 25-dart high-capacity drum, its battery-powered (four D batteries) mechanism can unleash a whopping five darts per second, making it the fastest-firing Nerf blaster ever made.  Coming out in the fall 2016, it’s priced at $49.99. 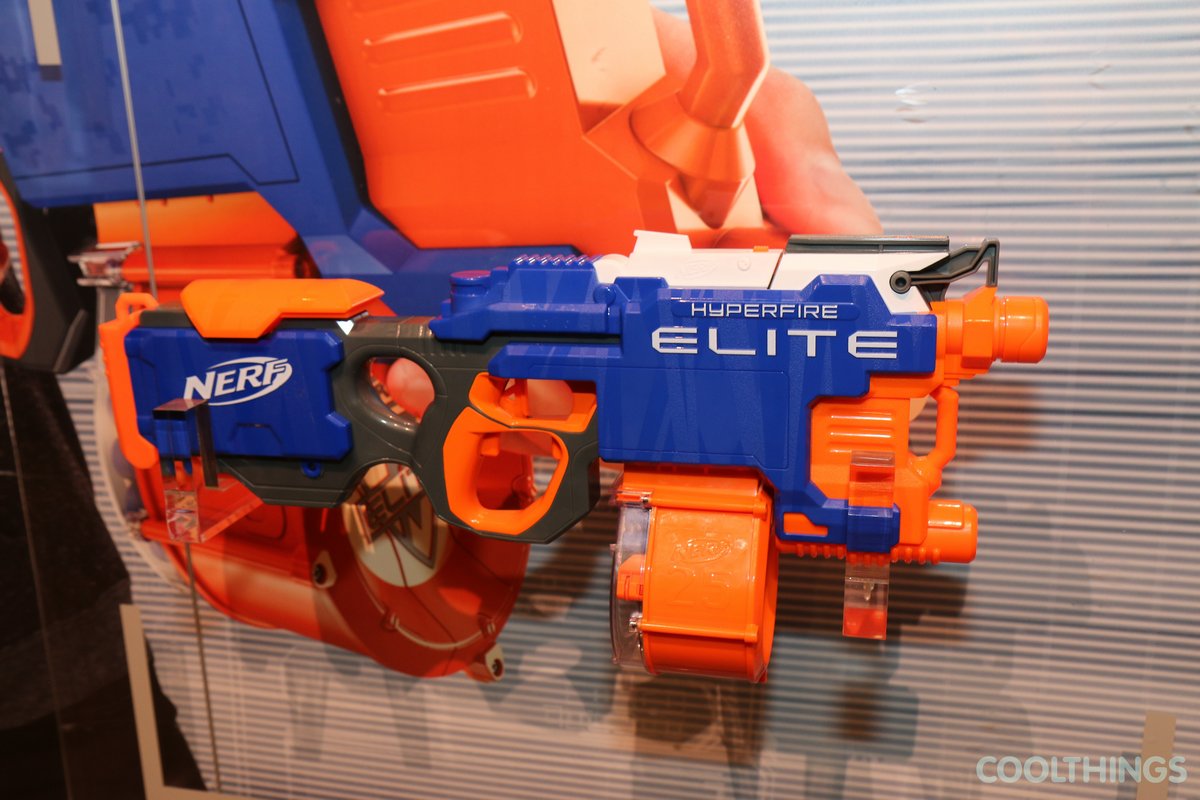 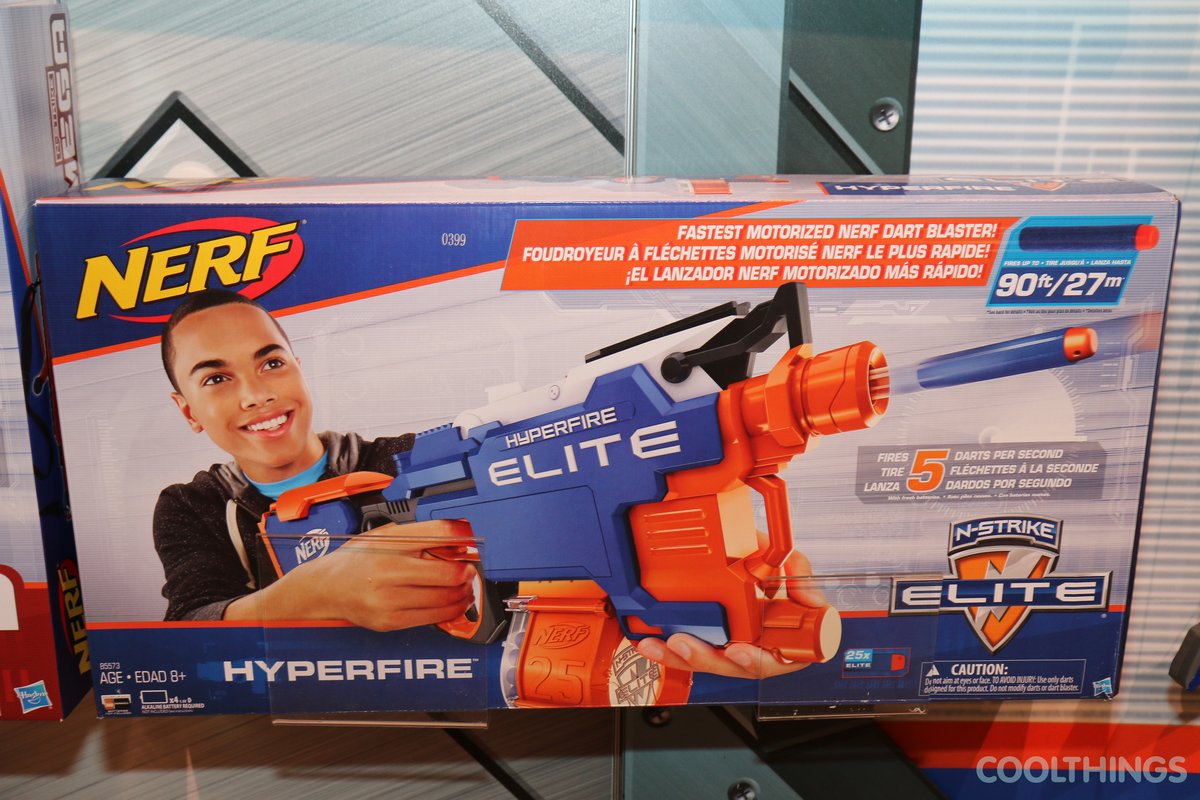 Nerf’s line aimed at older teenagers was easily one of the most exciting new toys from last year. To keep the momentum going, Nerf is expanding it in 2016, with two new blasters joining the roost, both packing the same high-speed, high-impact capabilities that we saw in last year’s Apollo and Zeus models.  Just like those two, the new shooters comes in two colors, blue and red, for team-based head-to-head battles, with both slated come out in the fall. 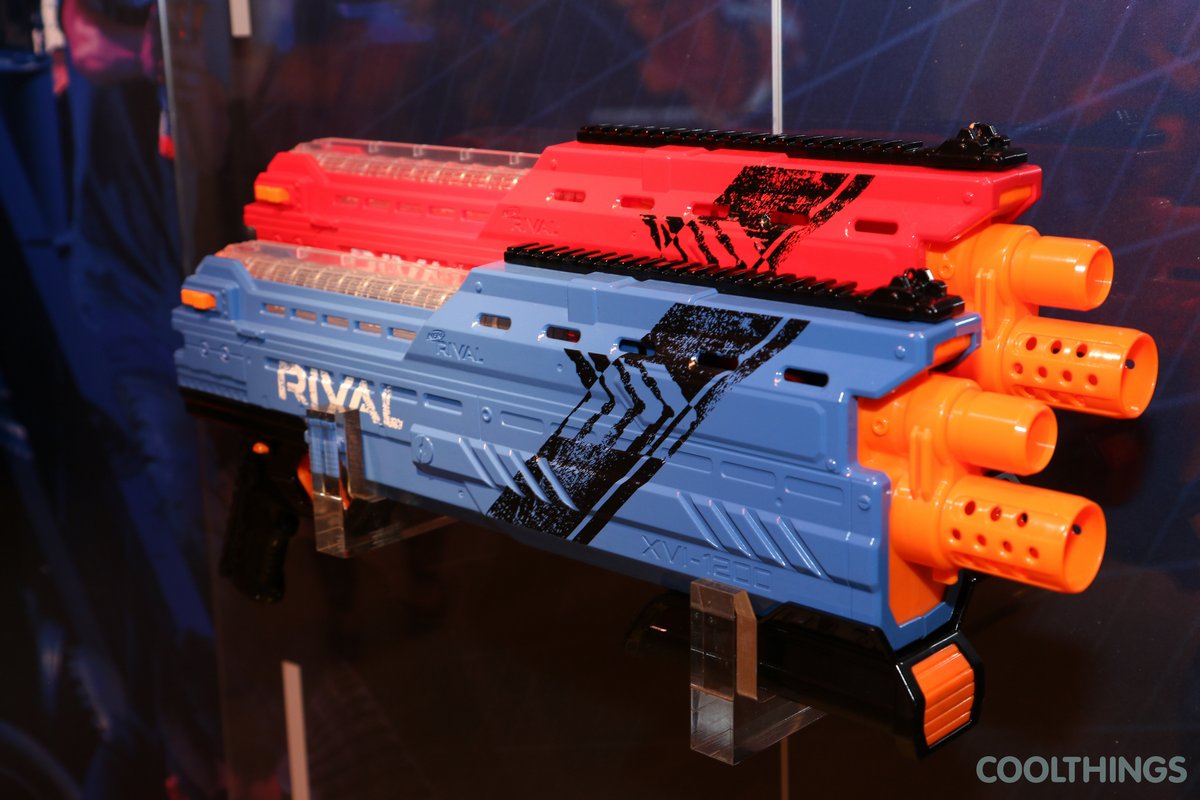 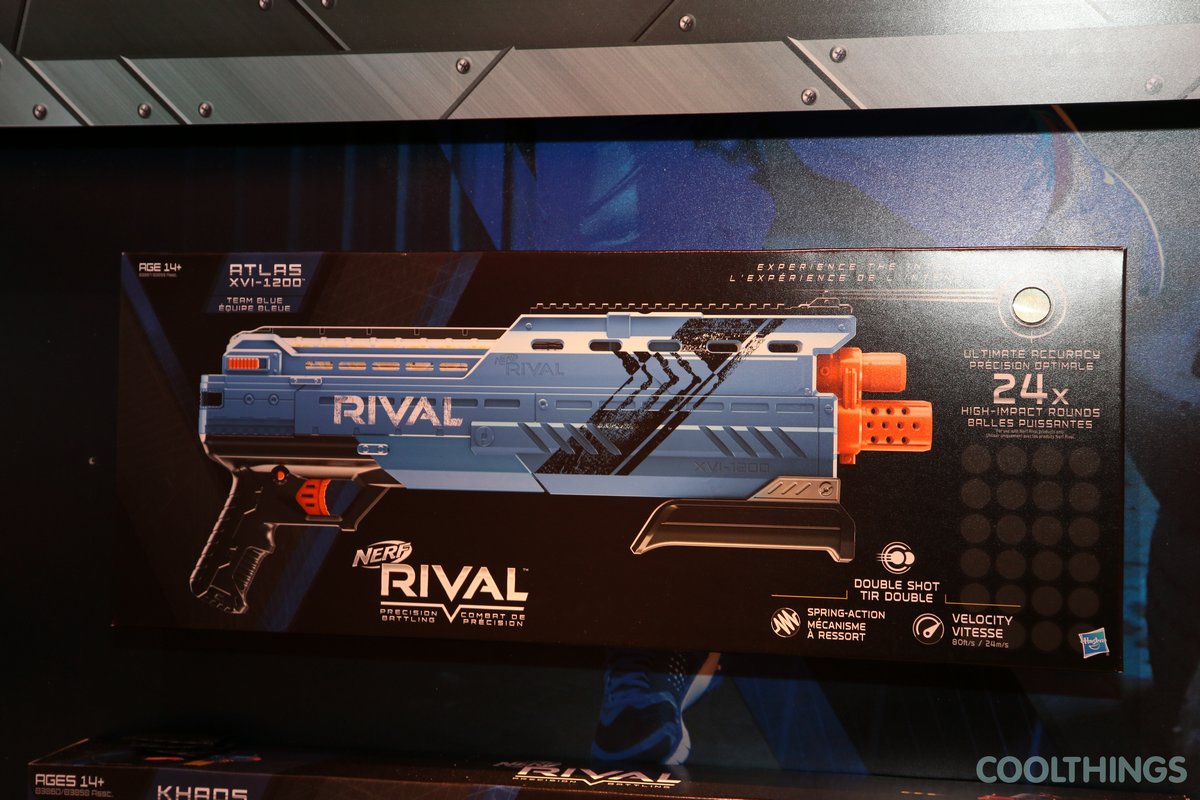 A pump-action shooter, this blaster shoots out two foam ammos at a time, increasing your chances of hitting the target without depleting your stock of ammunition.  It holds 12 rounds in the top-mounted barrel, with a tactical rail for mounting accessories.  Price is $39.99.

The first fully-automatic blaster in the Rival line, this rifle takes a 40-round magazine that you can easily empty by holding down the trigger, allowing you to bombard opponents with a high-speed shower of ammunition.  It comes with dual sights (front and rear, like real rifles) for accurate aiming and an auto-feed mechanism powered by six D-sized batteries.  Price is $69.99. 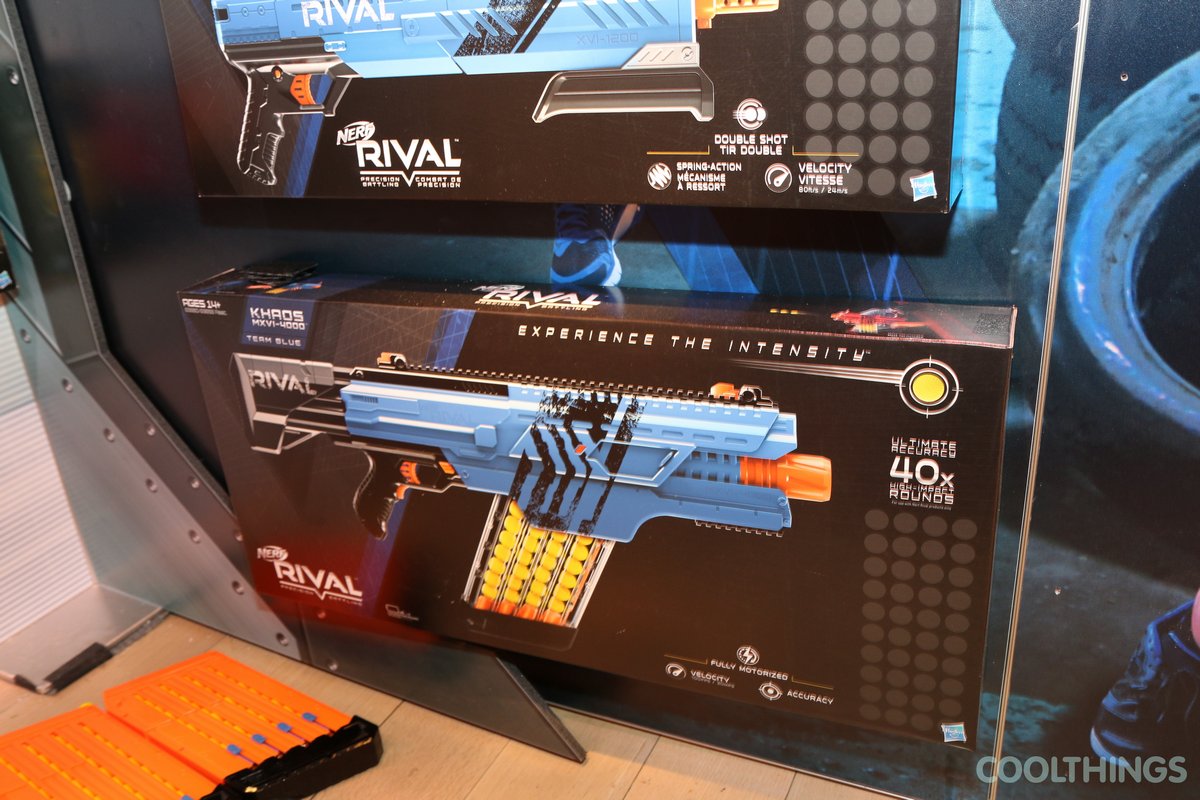 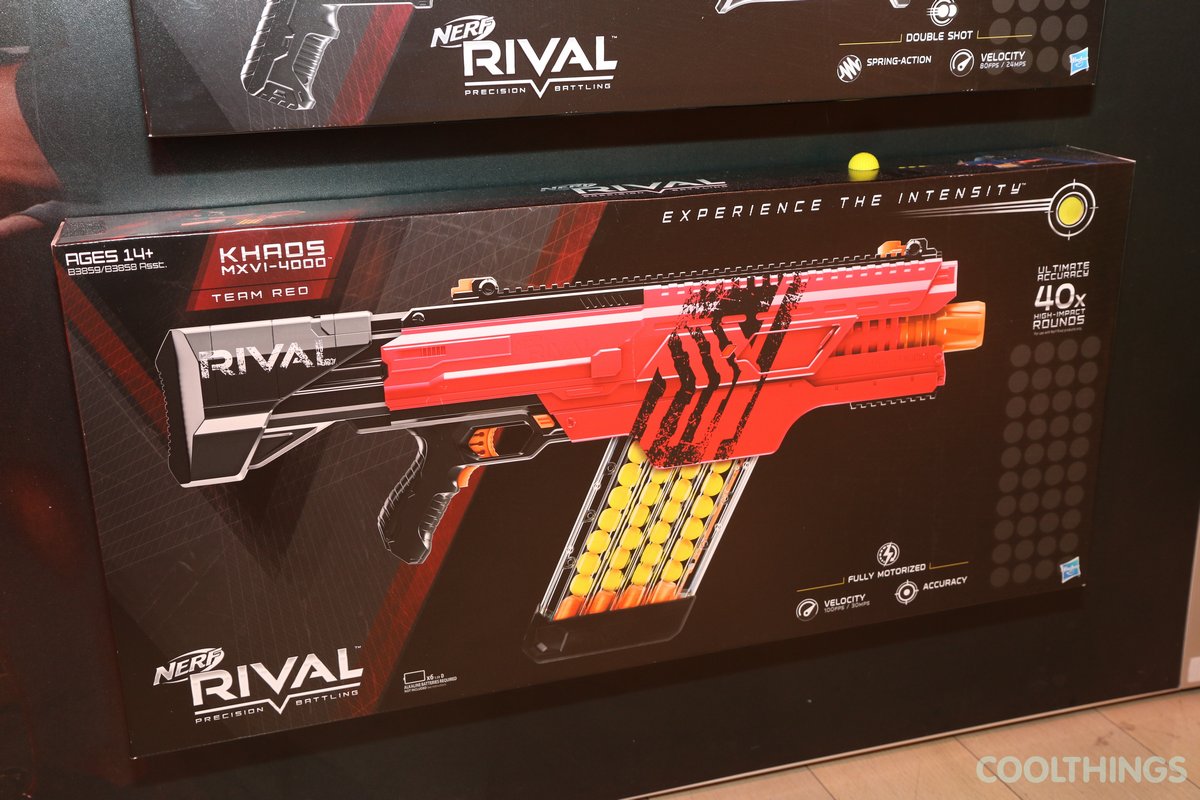 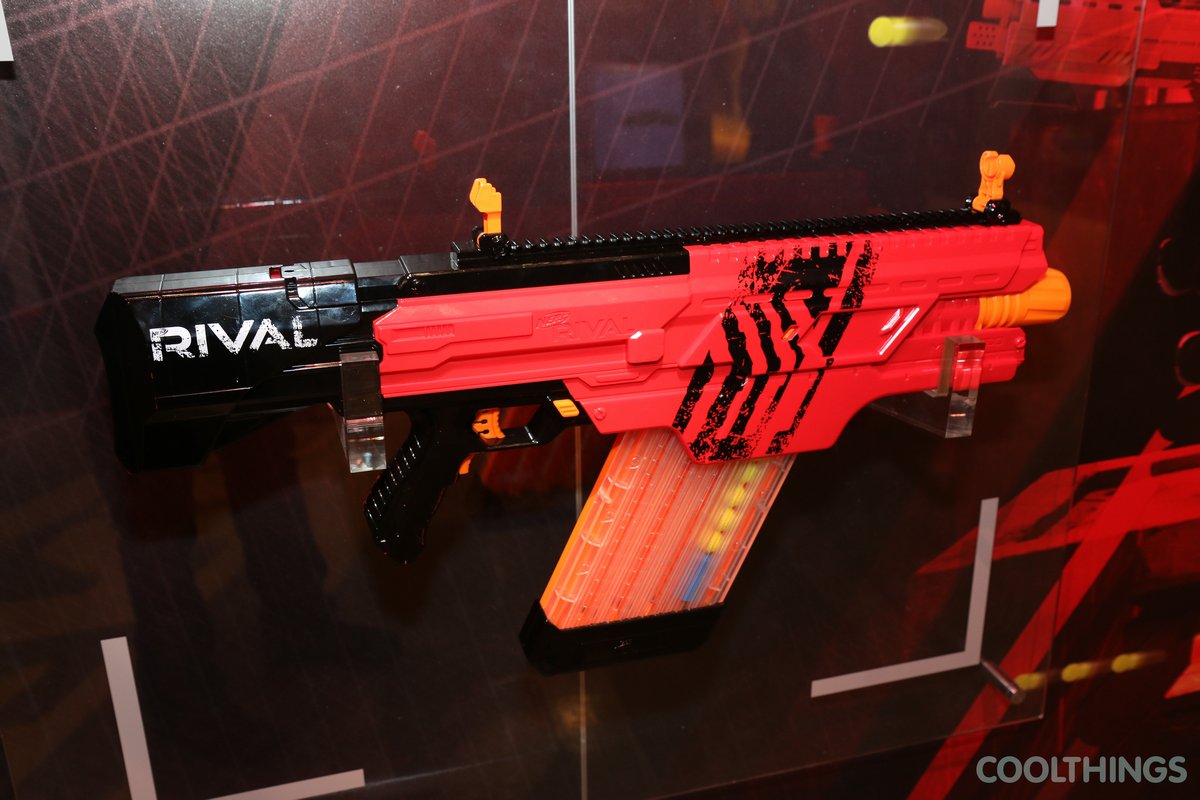 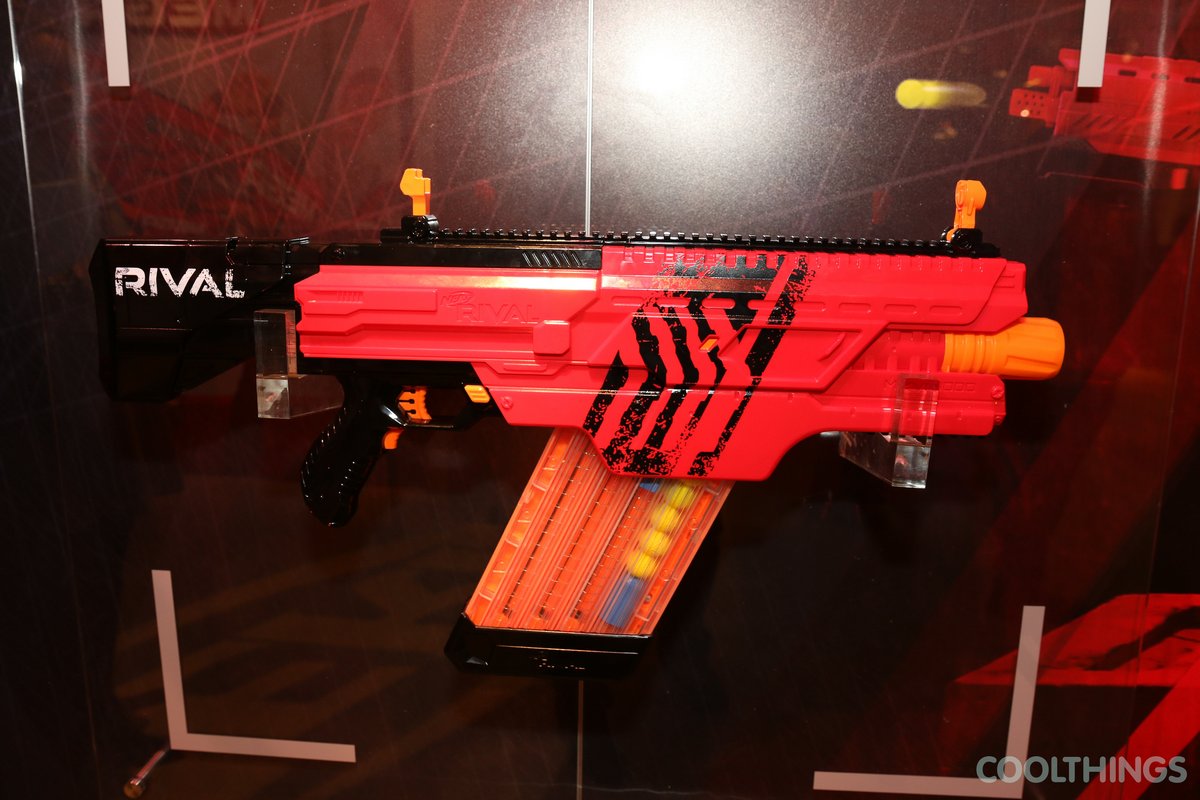 The N-Strike Modulus line has been a big hit for Nerf.  People love customizing their blasters, after all, and this series allows folks to do that like no other.  As such, it’s getting a good load of additions for the year, with the entire system now allowing for over 1,000 unique combinations. 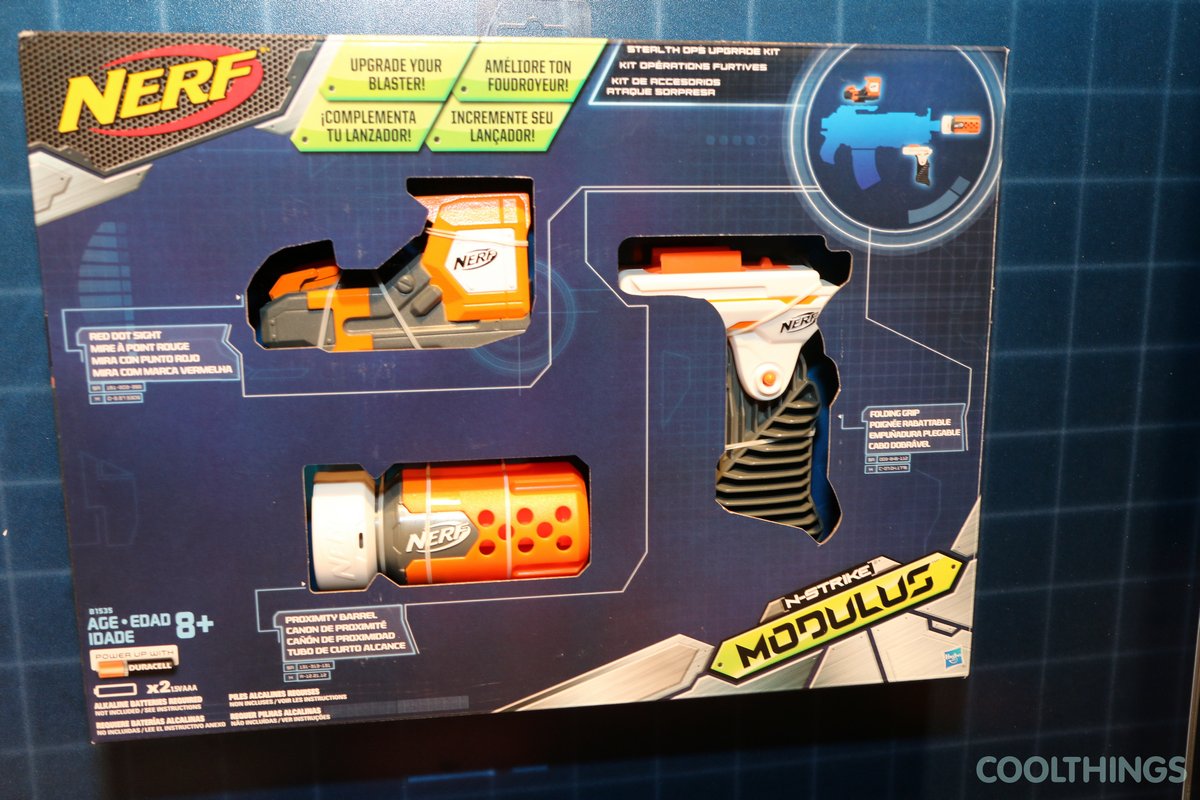 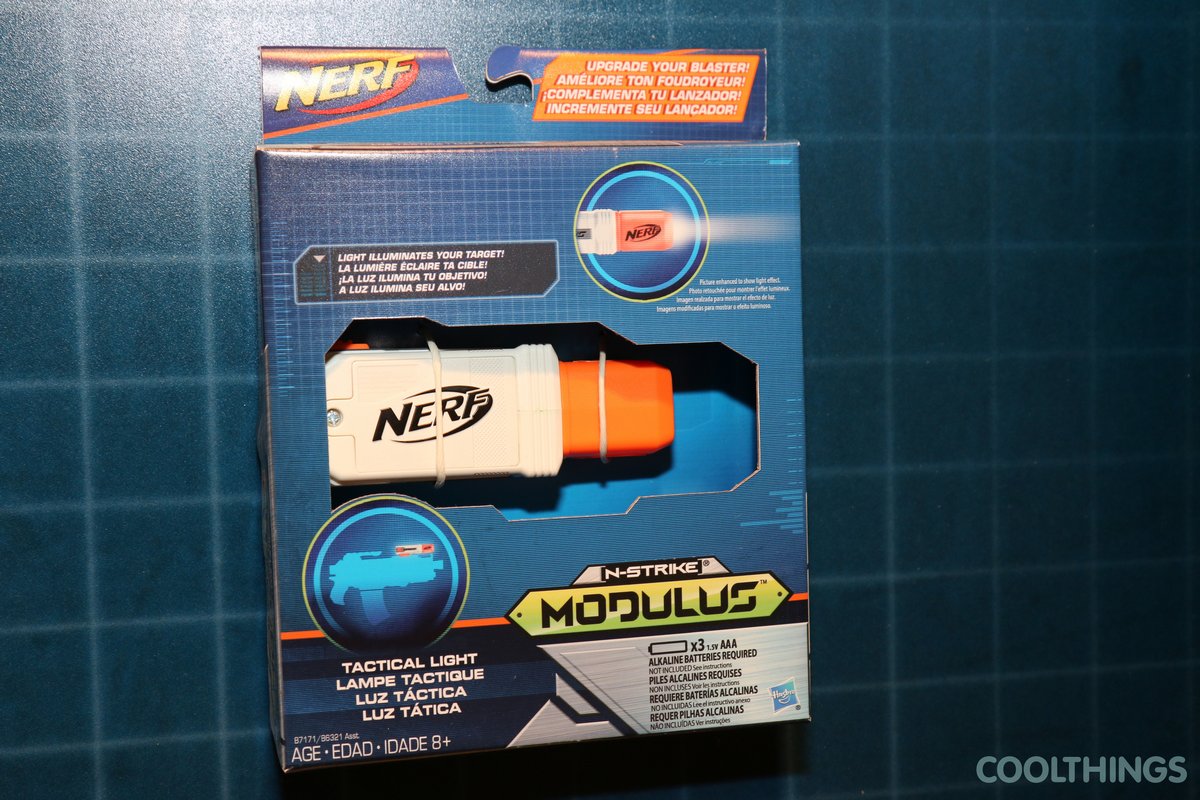 A small pump-action pistol that should serve as an ideal backup weapon, it comes with a detachable dart holder and a detachable barrel extension, allowing you to turn it into a bigger gun for heavy warfare and a smaller one for stealth operations on the down low.  It hits stores in the spring, priced at $14.99.

A compact pistol that can be customized for stealth operations, close quarters combat, or long-range battles, it comes with a detachable shoulder stock and a detachable barrel, enabling four different blaster configurations.  It takes standard six-dart clips, whose ammo it fires at distances of up to 90 feet away, while sporting a tactical rail on top for accessories.  It debuts in the spring, priced at $24.99. 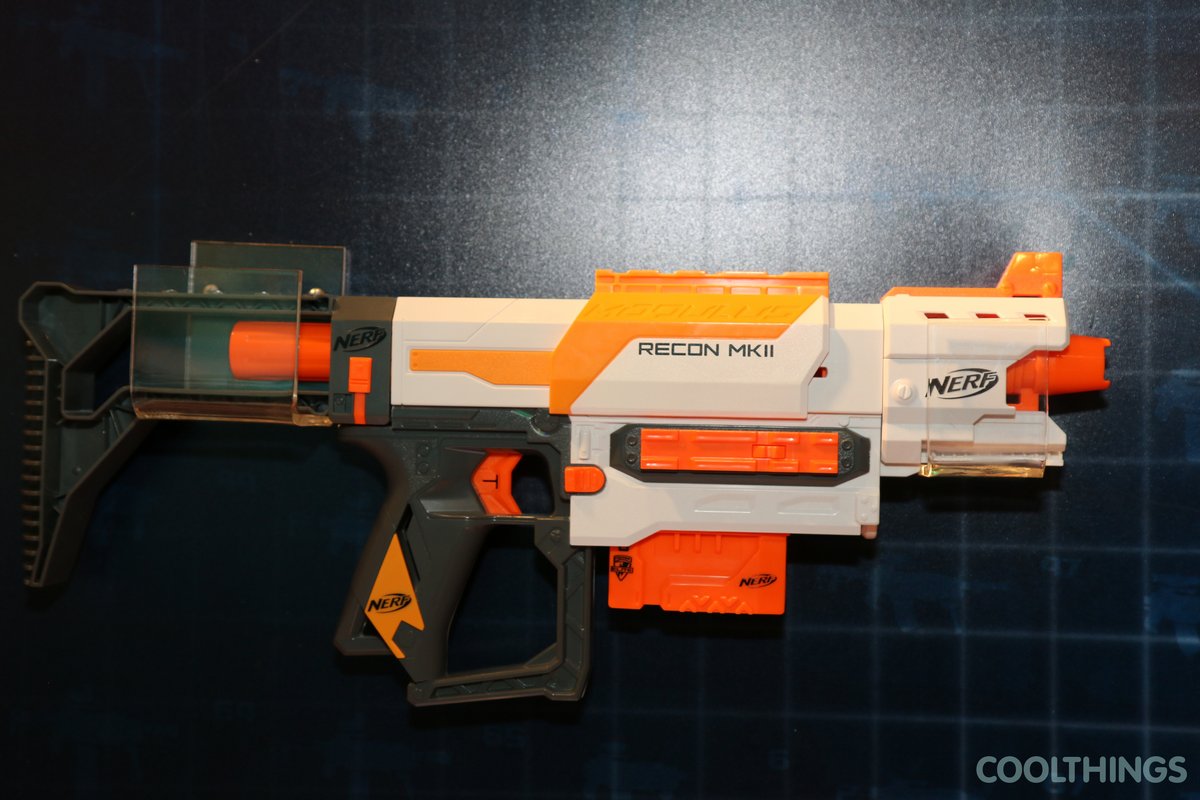 One of the most unique Nerf blasters we’ve seen, it can fire foam darts three different ways: a pump-action mechanism, a slam-fire mechanism, and a missile launcher.  The slam-fire shoots Elite darts from a 10-dart magazine, while the pump-action fires Mega darts from a four-ammo barrel mounted up front. The missile launcher sits on top of the blaster, carrying a single missile that’s launched using the shoulder stock for pump-action.  Coming out in the fall, it’s priced at $49.99. 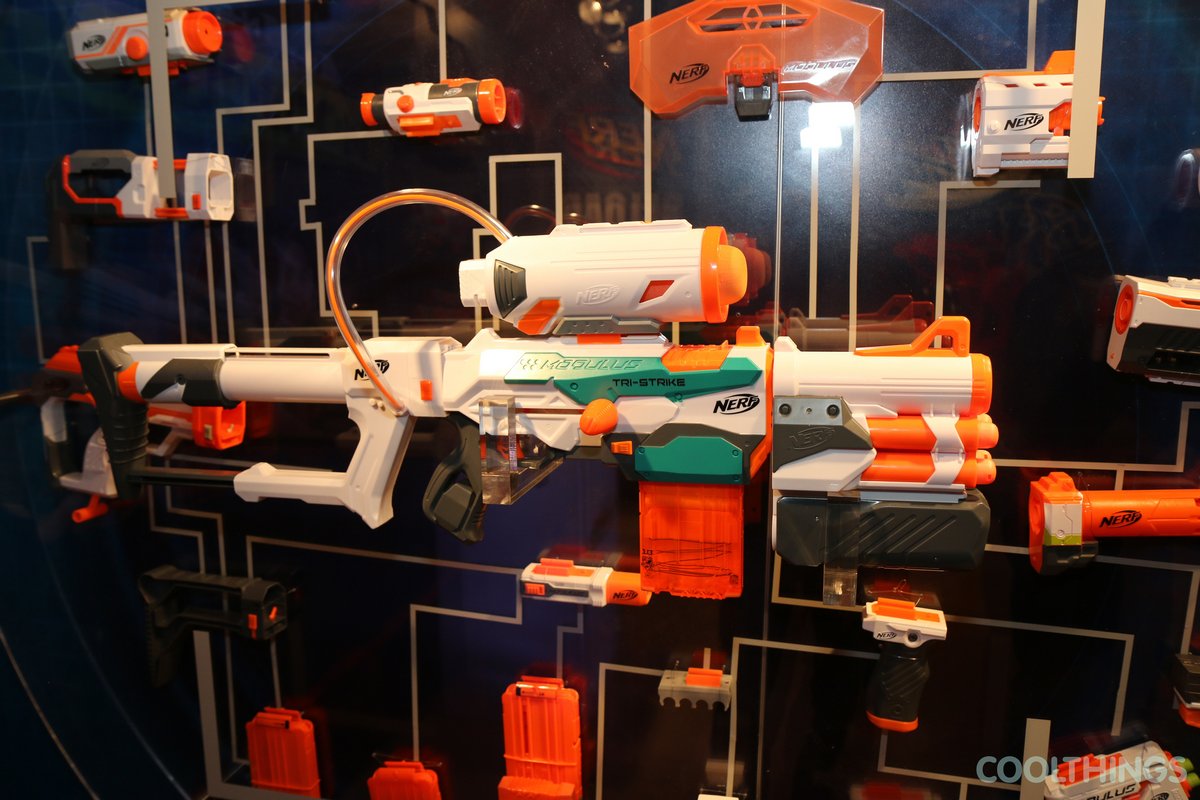 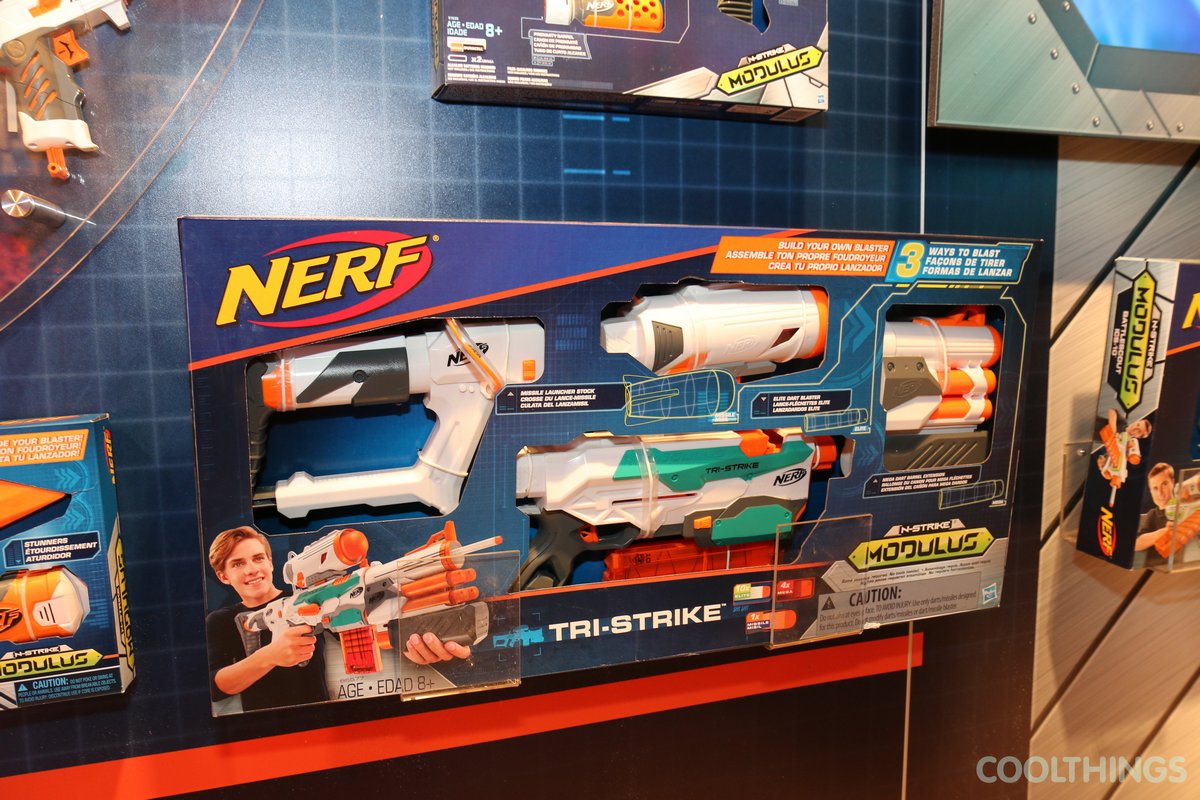 Like the ECS-12 from 2014, the Battlescout comes with an integrated camera for recording your foam battles.  Unlike it, this one mounts the camera on a tactical rail, allowing you to easily detach it for use in other blasters with tactical rails built-in.  Oh yeah, the camera also shoots in 720p, allowing you to capture some seriously cool footage.  Running on four AAAs, this motorized blaster shoots 10 darts using a clip-fed mechanism.  Available in the fall, it’s priced at $69.99. 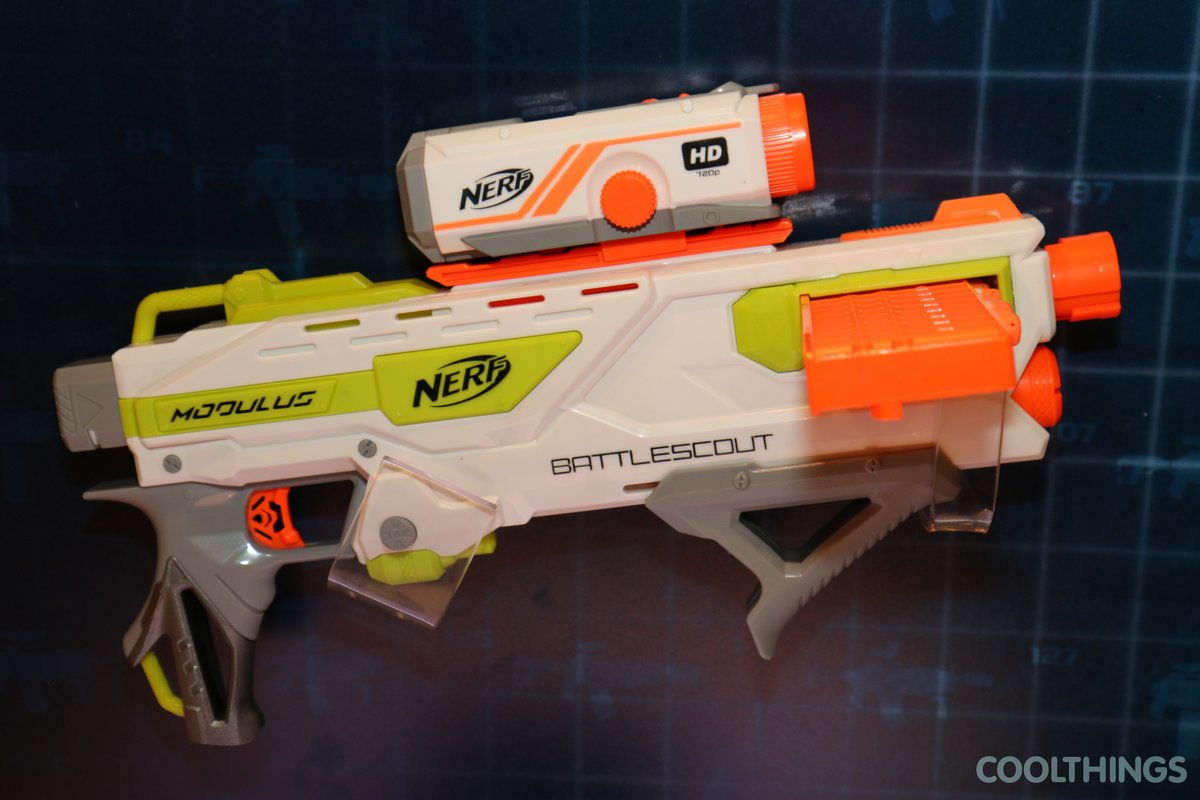 Do you like blasters with a sci-fi theme?  Then, you’ll love this all-new series, which features blasters bearing futuristic designs, complete with organic-looking elements that give them an extra-terrestrial feel.  Seriously, these things look like they’ll fire alien blobs and space goop, making them perfect for interplanetary foam warfare, whether you’re fighting for the invading forces or the native resistance movement who have appropriated the alien’s own weapons.  Each blaster in the line comes in an easily identifiable gray, purple, white, and orange theme.

A pump-action blaster, it’s a complex-looking toy pistol with dual handles to ensure steady aiming.  It can hold eight foam darts on the rotating barrel out front, which shoots out a single foam dart at a time.  Priced at $29.99, it’s scheduled to come out in the fall.

The motorized member of the Alien Menace line, this blaster has a top-loaded central barrel that can hold 16 darts at a time.  It comes with a front hold for steady handling, two triggers (one to rev the motor, one to fire), and a slightly less busy design than the Ravager. Slated to come out in the fall, price is $39.99.

Nerf’s post-apocalyptic line gets two new additions for the year, both of them embracing the futuristic steampunk theme that looks perfectly at home in one of those Hunger Games movies.  Each blaster gets the line’s signature dark gray, yellow, and orange color scheme.

Armed with four barrels, this blaster can load up on a quartet of ammo, which it shoots one at a time using a hammer-action firing mechanism.  To prime it, you slide the hammer back similar to real pistols, with a transparent window near the back allowing you to watch the internal action unfold.  It comes out in the spring, priced at $12.99.

Styled to look like a crossbow, this dual-handle blaster uses a pair of 12-dart magazines docked on the sides, giving you plenty of ammo before requiring a reload. It fires two foam darts at the same time for inflicting heavier damage, with a pair of tactical rails on top for mounting accessories on the blaster.  Slated to go on sale in the fall, it’s priced at $39.99. 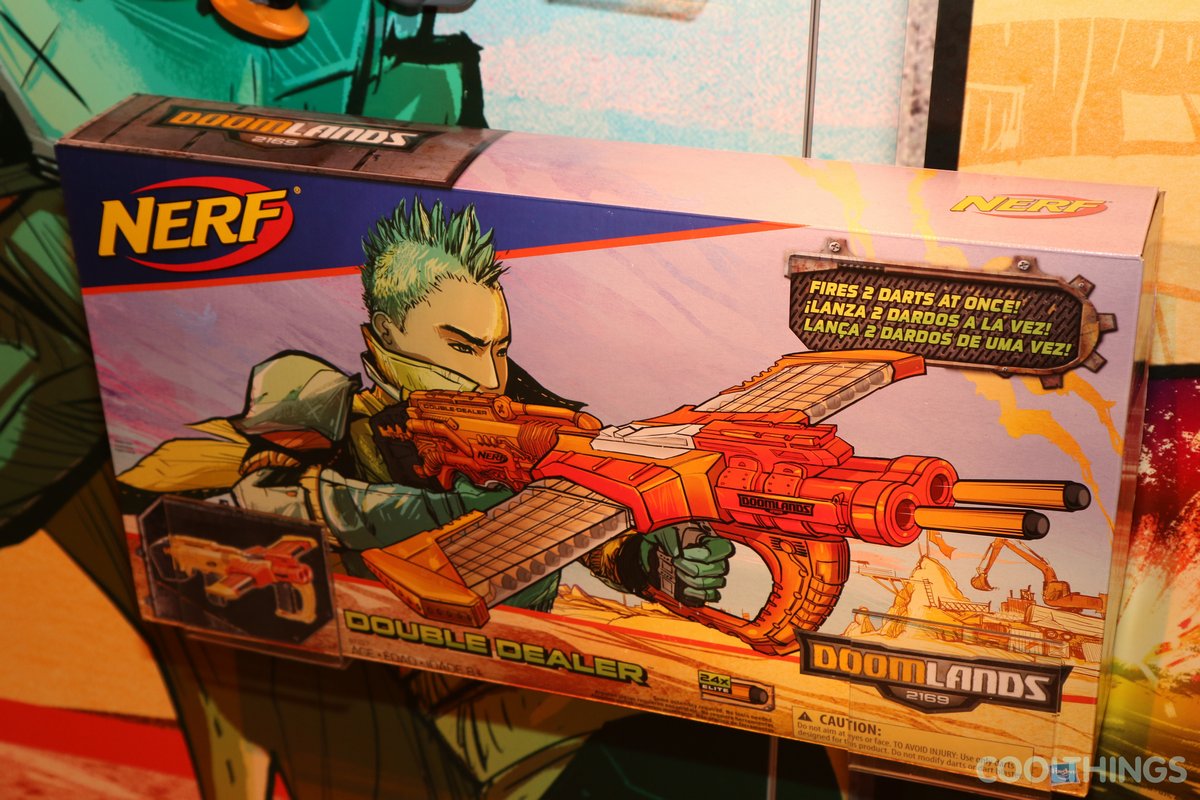 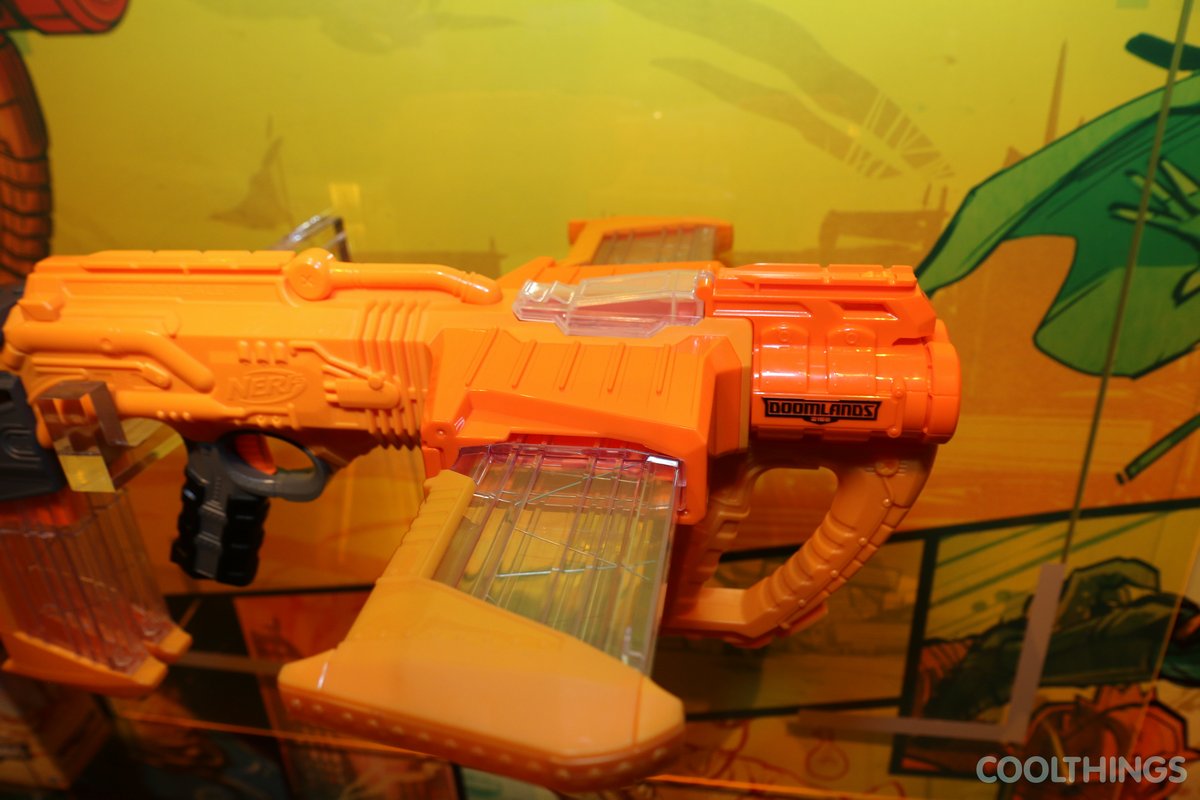 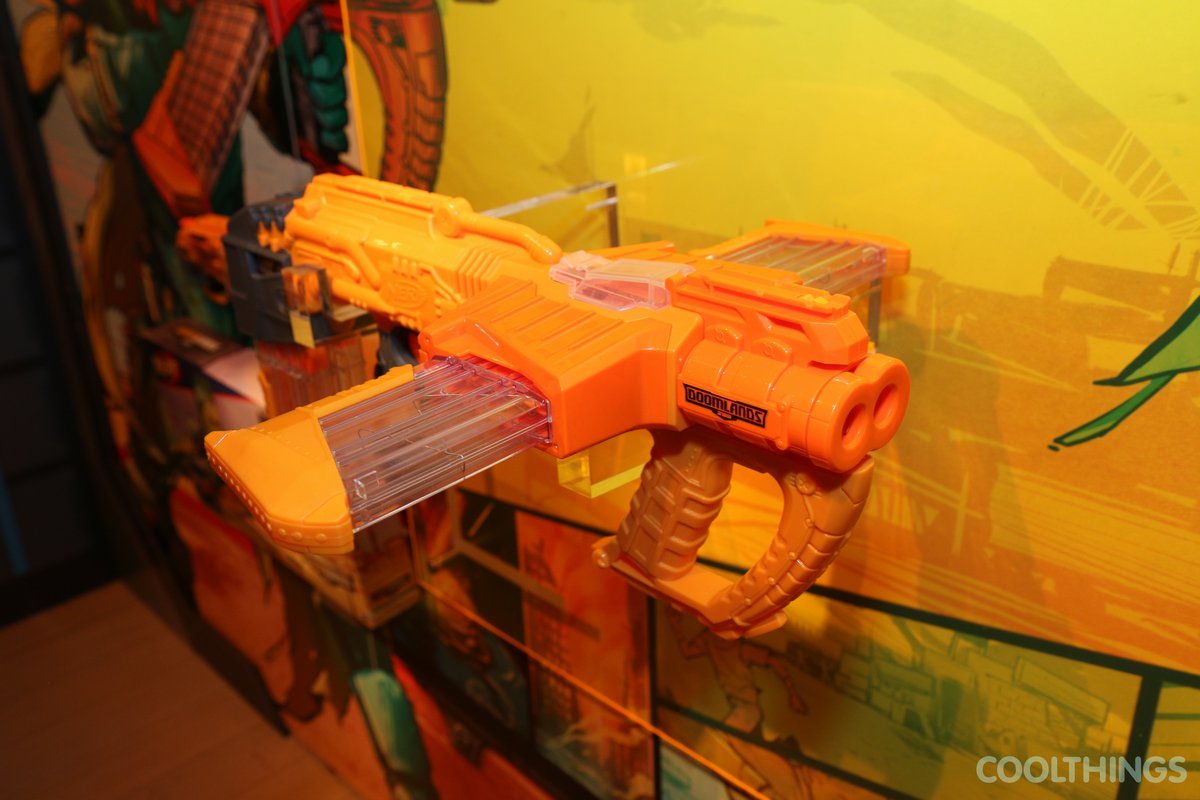 A new extension of the Doomlands line, this series scales back on the steampunk and steps up the sci-fi, producing blasters that look like they came straight out of the Empire’s armory from the Star Wars franchise.  Sporting a predominantly white color scheme (with tinges of orange and black), these things won’t look too out of place in the hands of a Stormtrooper.  Both blasters come out in the fall.

A machine gun-style shooter, this blaster uses a 10-dart magazine to keep you loaded with ammo, while a motorized mechanism allows you to unleash them at high speeds.  Powered by four AAs, it comes with two tactical rails on top, a pair of sling attachments, and a see-through window on the firing mechanism out front.  Price is $29.99.

A revolver pistol with extended length, it can take five darts at a time on the rotating cylinder at the center, with priming accomplished by pulling back at the hammer on top.  It comes with one tactical rail up top and a sling attachment along the grip.  Price is $19.99.

Still haven’t had your fill of the zombie apocalypse? Live it out with two new additions to Nerf’s zombie warfare line, which combines dart-shooting blasters with melee weapons for cracking zombie skulls.  Well, if foam and plastic blades can cut into real zombies, anyway.

A Nerf pistol, the blaster combines a futuristic design with a round saw blade, allowing you to blast every zombie in the office while looking Daryl-levels of badass.  It comes with a priming lever on the back that you cock to get a shot ready, with two onboard triggers – one to launch a foam dart and another to get the saw blade spinning.  Available now, it’s priced at $14.99. 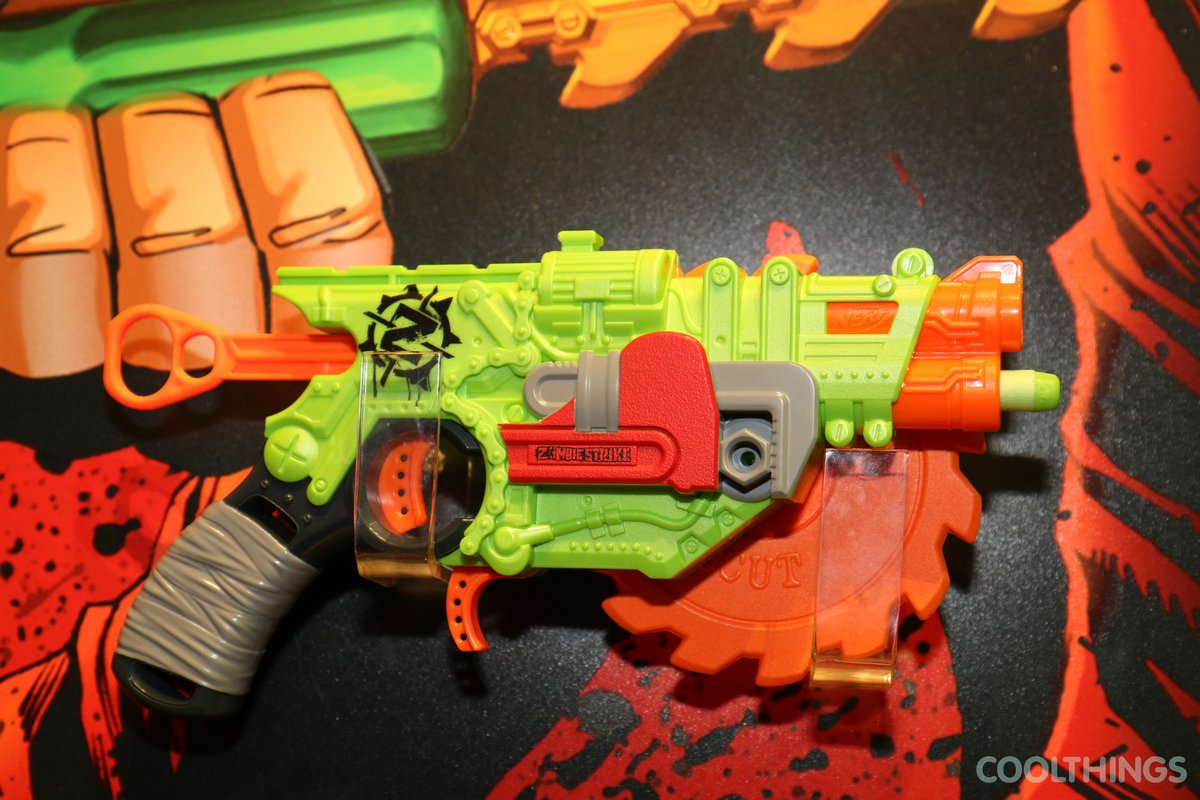 Billed as the ultimate zombie hunting weapon, this weapon combines a shotgun-style blaster with a chainsaw, combining two of pop culture’s favorite weapons for taking out the undead horde.  It holds up to eight darts on four barrels at each side of the blaster, which it fires one at a time with a quick pull of the trigger. There’s a sight on top to facilitate accurate aiming, a chainsaw-style spinning blade cut in foam, and tactical rails on either side.  It hits stores in the fall, priced at $29.99. 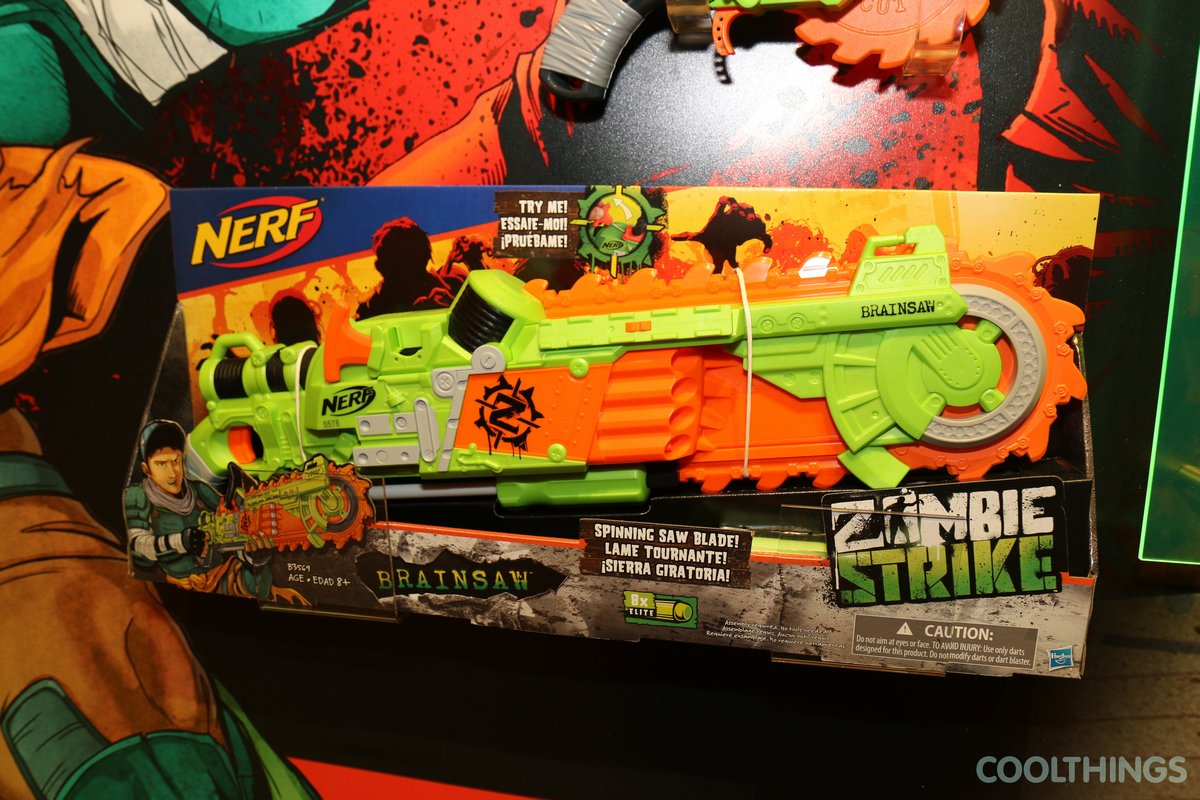 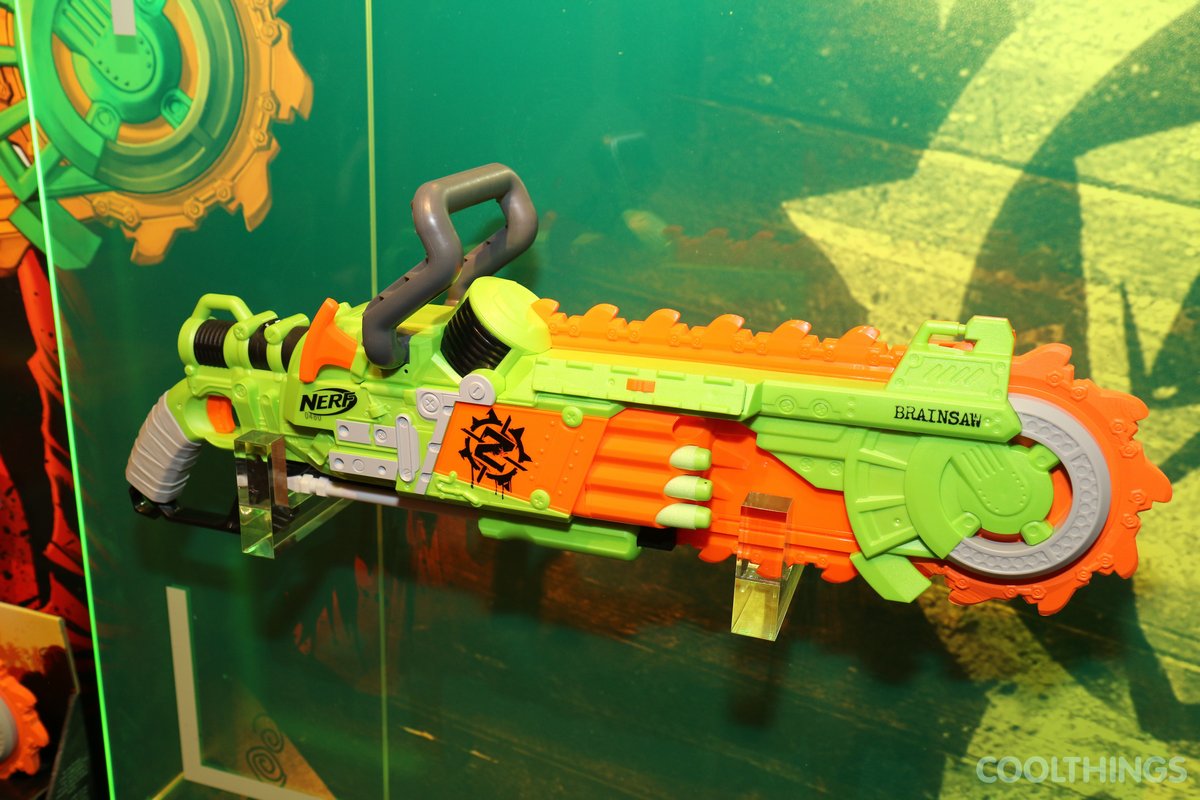