The original debut of the N-Strike brought features that changed blasters forever.  Last year, the Nerf N-Strike Elite line took those same blasters to a whole new level, bringing technology that really stepped it up on the performance front.  From higher rates of fire to faster reloading to extreme range, it allowed for seriously more efficient dart fights.  This year, Hasbro is injecting a healthy selection of new dart guns both in the N-Strike and N-Strike Elite lines. Full size gallery at the bottom section.

A total of seven new blasters are confirmed for the N-Strike Elite category, pimping features like motorized firing, dual-dart shots, and efficient battle performance.  While some of these have been soft-launched in select stores already, the entire lineup is expected for a widespread launch in the Spring. 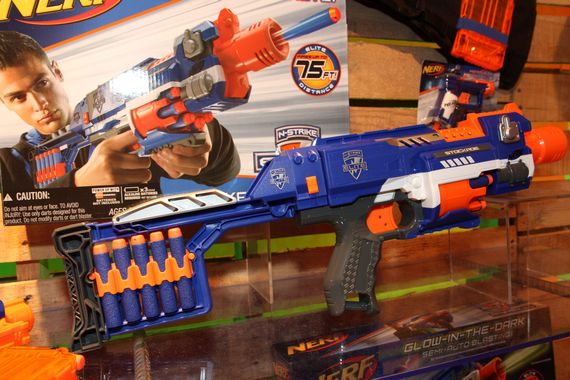 Need a blaster that’s reasonably compact while having a generous amount of ammunition to dispense with before reloading?  The Nerf N-Strike Elite Stockade Blaster could be your foam warfare weapon of choice, which lets you shoot 10 darts before requiring a reload.

It uses a rotating 10-dart barrel that can be quickly removed and replaced with another one.  One extra stock is included for quick reloading (if you have the spare darts, of course).  The Nerf N-Strike Elite Stockade Blaster, which requires three AA batteries for operation, will retail for $21.99.

Prefer your Nerf weapon to deliver a pair of loads at a time?  Not a problem with the Nerf N-Strike Elite Rough Cut Blaster, which delivers double dart blasts like nobody’s business.

A 2×4 blaster, it has a barrel that holds up to eight darts, allowing it to fire a pair of darts at a time four times in a row before requiring a reload.  It can also do one dart at a time — just pull the trigger halfway and watch the lone dart shoot out.  Like other Elite blasters, it will send foam ammo at blazing speeds a distance of 75 feet, making for a deadly and effective weapon in cubicle warfare.   It comes with eight N-Strike Elite darts.

The Nerf N-Strike Elite Rough Cut Blaster will retail for $19.99.

Want an easy to handle blaster with enough power to be trusted in battle?  Look no further than the Nerf N-Strike Elite Stryfe, which uses a six-dart clip for quick reloading.  Able to shoot foam darts in rapid pace at distances up to 75 feet (you’ll need to rev up the flywheel to max to get this distance), it’s an excellent second weapon for large-scale foam warfare, as well as a great on-hand pistol for daily use.

The Nerf N-Strike Elite Stryfe Blaster will retail for $19.99.

If you prefer waging your Nerf battles in the dark, things can get a little more confusing.  Did you really hit Marty from Accounting since he’s denying it and you didn’t really see the darts hit his body?  You know, because it’s dark and everything.    The Nerf N-Strike Elite Rayven CS-18 Blaster should fix the problem with its high-visibility glow-in-the-dark darts.

Armed with an 18-dart Firefly Tech clip, the blaster will charge the inserted glow in the dark darts to ensure they are sufficiently illuminated once they leave the barrel of your gun.  It’s fully motorized, too, allowing it to send foam projectiles at distances of up to 75 feet.  The blaster and the Firefly Tech clip require four and three AA batteries, respectively.

A successor to the popular Maverick REV-6, the Nerf N-Strike Elite Strongarm Blaster features a short, rifled muzzle that allows for rapid slam-fire shooting to keep opponents at bay. Measuring 12 inches long, it’s a very compact direct-plunge blaster, making it ideal for one-handed firing (or dual-wield if you’re so inclined).

It comes with a six-dart revolving barrel that can be removed for easy reloading on the go.  All Nerf darts, except the longer Streamlines, can be used.   The Nerf N-Strike Elite Strongarm Blaster wil retail for $12.99.

The first thing you’ll notice about the Firestrike is the presence of two triggers — one on top and another on the bottom.  And, no, the double-trigger isn’t for firing multiple darts.  Instead, the bottom trigger turns on the integrated red light beam for more accurate targeting, while the top one does the actual firing.

Reloading requires you to put one dart directly in the muzzle every time you need to let a shot go, so it’s not exactly the most efficient weapon for close quarters battle.   For sniping, though, the addition of the light beam, which can close in on targets up to 15 feet, makes this weapon ideal.

The Nerf N-Strike Elite Firestrike Blaster can shoot up to 75 feet and has compartments under the muzzle for two extra darts.  It will retail for $9.99.

A very small blaster, the Triad EX-3’s handle is actually longer than the weapon’s body, making it an excellent backup or primary weapon for stealth battles.  Because of the size, it’s one of the few guns in the N-Strike Elite series with no tactical rail.

It features three front-loading barrels, so you can have three darts ready to fire darts up to 75 feet at any time.  When all three barrels are filled up, it will shoot one at a time in a counterclockwise sequence.  Armed with an intelligent air restrictor system, it can identify when a barrel is empty and won’t fire air out of it, no matter how many times you pull the trigger.

The Nerf N-Strike Elite Triad EX-3 Blaster will retail for $6.99.

While the N-Strike is no longer the top dog in the Nerf line of blasters, it remains as one of the most important series in the brand, as it started many new trends that we’ve seen become a necessary element of dart blasters.  This year, the line is getting three new blasters in its arsenal, slated to debut in the Spring and Fall.

Fancy yourself more Robin Hood than Rambo while battling fellow cubicle drones when the boss is away?  Not a problem.  Pick up a Nerf N-Strike Blazin Bow and bring some Hawkeye into the proceedings.

A pull and release blaster that mimics the actual operation of classic bows, you simply pull back, aim and release to send your foam arrow blazing at your target.  It can hit targets up to 40 feet away.  You can only load one foam arrow at a time, although there are a couple of slots on the bow itself to hold two backup darts so you can reload quickly.

The Nerf N-Strike Blazin Bow Toy comes with a unique black and orange color scheme, along with fire patterns, that set it apart from other blasters in the N-Strike line.  It will retail for $19.99.

This is a rerelease of the similarly-named blaster from 2009 with little changes beyond the color scheme — merely adding blue and N-Strike Elite colorways (blue, white and orange) to the original yellow.  It’s still particularly compact, barely measuring 5 feet long, and can hold just one dart at a time.  The only other change from the original is the accessory rail, which has been moved to the rear instead of the front.  The Nerf N-Strike Reflex IX-1 Blaster will retail for $5.99.

Like your blasters really, really small?  It’s hard to find one smaller than the Nerf N-Strike Jolt, a pocket-sized single-dart pistol.  There are no tactical rails and no backup dart storage — just a single front-loading barrel and a trigger for sending it soaring through the air at distances of up to 40 feet.    If you want a foam shooter than can hide in your pants pocket, though, this should be the best option available.  It will retail for just $3.99.