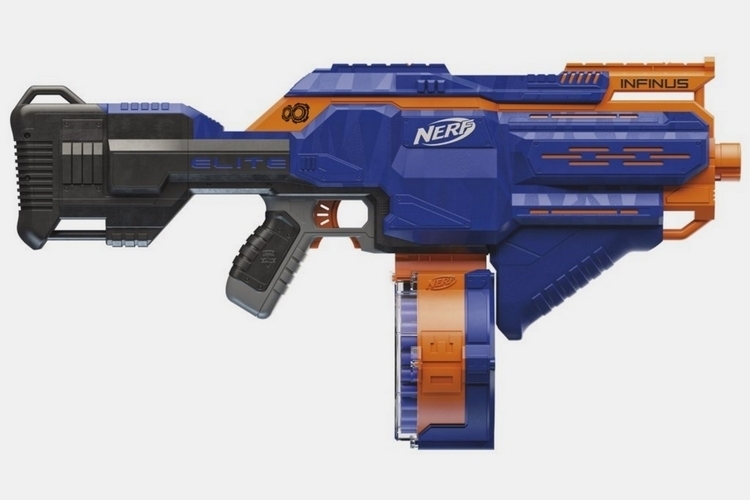 Large Nerf blasters with large cartridges that hold dozens of foam darts are awesome, since they let you rain down a large stream of ammo in one go. Problem is, ammo runs out, requiring you to crouch down and reload before getting back in the action. The Nerf N-Strike Elite Infinus changes that.

Designed to allow on-the-fly reloading, the blaster can be continuously fed fresh ammo while you’re shooting, so you never have to back off from your opponents for extended periods of time. We know, reloading while shooting means you’re not quite as focused on hitting your targets as you should be, although it does mean you can keep on attacking your opponents nonstop.

The Nerf N-Strike Elite Infinus, basically, looks like the RapidStrike CS-18, albeit with a drum holding the ammo instead of a magazine. That removable drum can hold 30 Elite darts at a time, allowing you to keep a generous stock of ammo in your fingertips the entire time. Pulling the trigger shoots out just a single projectile, although it does come with a powered acceleration button that revs up the flywheels, allowing it to unleash a hellish torrent of foam darts when you keep your finger on the trigger.

A funnel in the back of the blaster allows you to manually feed darts to it, which is piped directly into an empty slot on the drum, making it possible to reload on-the-fly. We know, inserting one dart after another will still take you a while to fill up the drum, although doing so allows you to stay in the thick of fight, since you can reload at any time as well as load just a couple of darts to quickly get back in the action. You can also hold down the acceleration trigger and load the dart through the rear funnel to fire just a single dart.

As you can imagine, the Nerf N-Strike Elite Infinus changes the game significantly, since it gives players a way to reload without having to release the clip and take out the drum. That represents a whole load of time saved, all without having to take a break from the game. This should prove especially helpful during those times when one or two extra ammo could have made difference in who wins or loses, since you can just load and shoot while your opponents take their time reloading.

Do note, the blaster requires four D batteries to activate the powered mechanisms, so make sure it’s properly loaded before engaging in a foam battle. Since this a blaster that can be reloaded on-the-fly, we’re not entirely sure how the internal mechanisms work, although we’re curious to see how everything works together. I mean, it can reload a removable drum from a funnel in the rear. We imagine a lot of grown folks getting this for themselves will spend some time tearing the darn thing open to see exactly how everything functions.

Slated for availability in the fall, the Nerf N-Strike Elite Infinus is priced at $69.99.