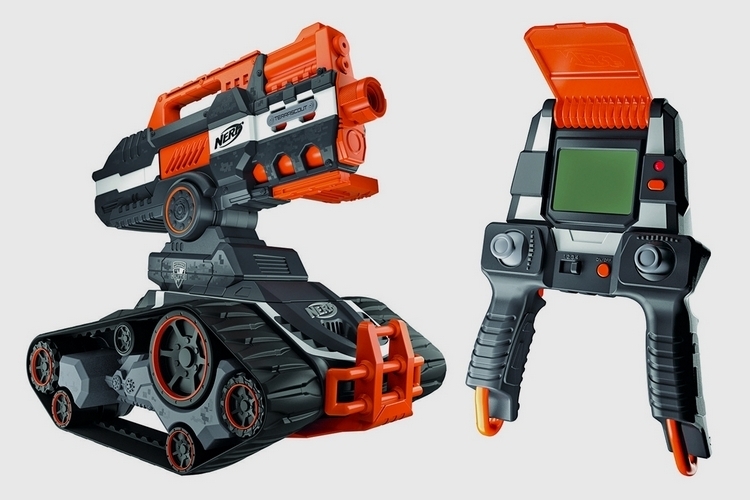 Half the fun of Nerf battles is blasting foam darts against opposing combat teams right in the thick of the action, so we’re not entirely sure about the joys of sending in a remote drone to blast them while you hide away in a corner. To make sure you still enjoy it, the Nerf N-Strike Elite Terrascout RC Drone uses an integrated camera for streaming the ensuing commotion, allowing to you get a full view of the mayhem while remaining safely out of the line of fire.

Operated using a wireless remote with a built-in screen, it lets you accurately maneuver the tank from a safe distance, allowing you to spring a surprise attack on any unwitting opponents. Whether you want to take a shot at co-workers in another cubicle, fire darts at random people behind you at the beach, or have the kids battle a dart-shooting robot in the backyard, this thing should do the trick.

Designed for both indoor and outdoor use, the Nerf N-Strike Elite Terrascout moves around using tank-style treads, allowing it to maneuver in less-than-flat terrains. The blaster can be aimed independently of the direction the drone is facing, with the 720p camera following the line of sight of wherever the barrel is facing. Features include a fully-automatic 18-dart clip system, an integrated SD card for recording your attacks, a rechargeable battery on the robot (the remote needs four AAs), a pair of tactical rails (one on the handle and one below the muzzle), and compatibility with the outfit’s barrel extensions. Do note, it’s not waterproof, so keep it confined to dry conditions.

Slated to come out in the fall, the Nerf N-Strike Elite Terrascout RC Drone is priced at $200.