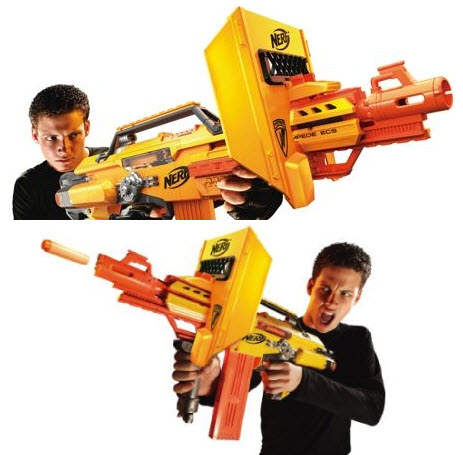 Want to shoot evil people in your office with a rapid barrage of Nerf darts?  Sure, you’ll probably be fired after such an episode, but the Nerf Stampede ECS-50 should sufficiently equip you with the hardware to do just that.

Billed as the “first fully automatic NERF Clip System blaster to date,” the gun spews ammunition at a rate of 18 darts per second – a volume of violence that’s bound to satiate even Rambo’s unquenchable bloodlust.  The company calls it one of the most “exciting N-STRIKE developments released in over 40 years of NERF brand history” and it’s a tough claim to disagree with. 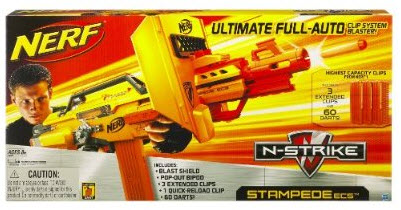 The Nerf Stampede ECS-50 blaster is huge at 29.9 x 14.8 x 4.4 inch dimensions and a full 6.2 lbs of weight.  It comes with a pop-out bipod that doubles as a handle, along with a removable shield to help keep enemy shots at bay.  The gun ships with 60 darts, three extended clips (good for 18 darts each) and one quick reload clip (six darts), so you can keep plenty of ammunition on hand.

For a plastic action toy, this looks pretty crazy.  I can just imagine the havoc 8-year olds will be wrecking with this thing in hand, not to mention the heights it will elevate cubicle warfare forever.

Release of the Nerf Stampede ECS-50 is slated for September 9th, with pre-orders priced at $54.25.
[phpzon]Nerf N-Strike Stampede ECS, 1[/phpzon]