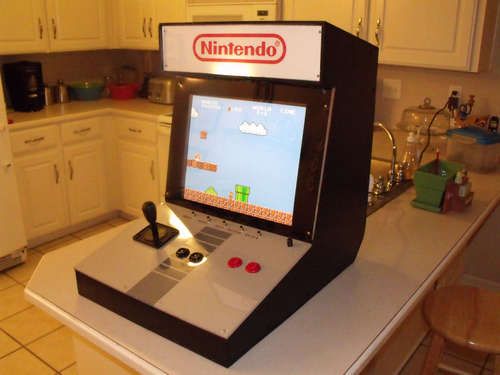 It’s nice to get an arcade cabinet for your game room. Scoring one with a beer tap on the side (see Arkeg) is even better. Having it in your kitchen counter right next to the fridge where all the beer hides, however, is just sublime. This homemade counter-top Nintendo arcade cabinet just made me drool with envy, not to mention want to spend more time in the kitchen than I normally do.

The machine’s guts consist of an old spare PC (running Windows XP), with a 17-inch LCD used as the screen. A custom program listing all available games auto-loads during bootup, with a NES emulator and pre-installed ROMs providing the on-screen entertainment.

Measuring 24 x 18 x 24 inches, the cabinet was built using 0.25-inch thick MDF. One set of joysticks and arcade buttons have been soldered into the board, along with two USB and two NES ports around the back for plenty of controller options. Yes, you can use the old NES controllers you’re got saved in your mom’s attic without any modding.

Since it’s a full-fledged (albeit, older) Windows PC, you can easily plug in a keyboard (or mouse) for use as a kitchen computer (for checking recipes or listening to some sounds). The creator even added wireless internet so you can update your Facebook profile while the meat sauce is cooking. In one fell swoop, this just made every all-in-one computer they’ve been promoting for use in kitchens just look silly, right?

Step-by-step details of how the bartop arcade was put together is available from Instructables, along with a video (posted below).