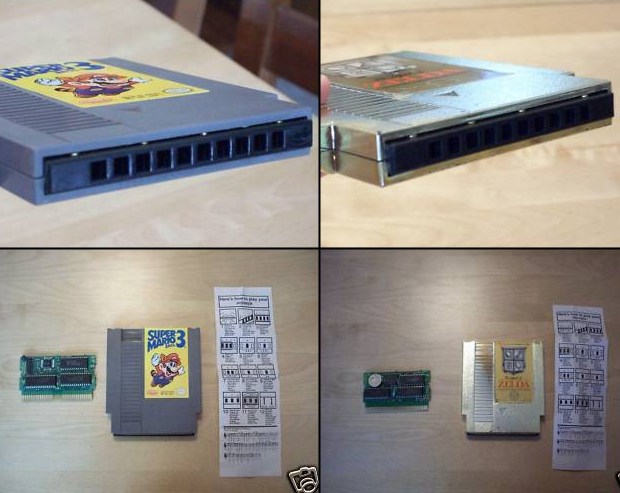 How do you play games without a console? Well you don’t. In the case of these NES Harmonicas currently selling on eBay, you actually play the cartridge itself.

Yep, it’s harmonica hardware crammed into a gutted-out NES cartridge. It’s supposed to play just like a regular free-reed instrument, except you’re blowing down the butt of a broken game instead of a slab of rectangular plastic or steel. The mod is also nothing new, with the original tutorial for putting a “Harmonesica” together (and whoever made the ones on auction followed it to the letter) published by Monthenorium way back in 2008.

The three functional instruments being auctioned on eBay, however, are all pre-assembled for your convenience. All you have to do is blow your cheeks out and carry a tune (easier said than done, of course, if you’re terrible at music). Three NES Harmonica cartridges are available for bidding individually, namely Super Mario Bros. 3, a Gold Edition Legend of Zelda and Dick Tracy. Each one is fitted with a Hohner Pocket Pal harmonica, an instruction sheet for playing the harp and the actual game PCB removed from the cartridge (which is, theoretically, playable).

Sure, it’s neither an original mod nor an awesome instrument (a $10 Pocket Pal probably sucks), but imagine how priceless the image of you playing Kei$ha’s Tik Tok on a gold Legend of Zelda cartridge will be. The bids are still low and I doubt it’s going to up too much, since it’s a largely easy mod. Might be nice to score one without having to do all the work.