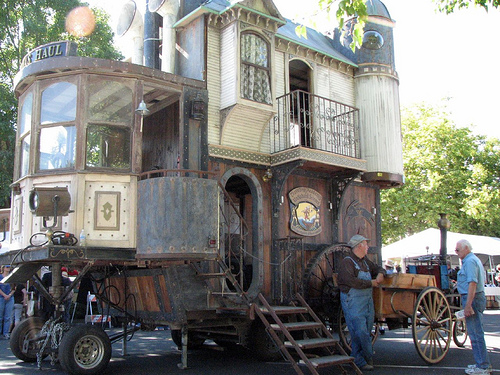 If you’ve attended any Burning Man event the last couple of years, you’ve probably caught sight of the Neverwas Haul, a three-story Victorian steampunk house on wheels.  Rather than a trailer home that needs to be pulled from a car, however, it’s entirely self-propelled using steam technology (at least, I think so).

An ongoing project from the Academy of Unnatural Sciences out of Berkley, California, the vehicle has been constantly evolving since its inception in 2006, when it was originally designed to roam the Black Rock Desert for that year’s Burning Man festival.  This year’s version of the car brings a few updates and more of the same Victorian-era favors that made it such a hit to audiences wherever it shows up. 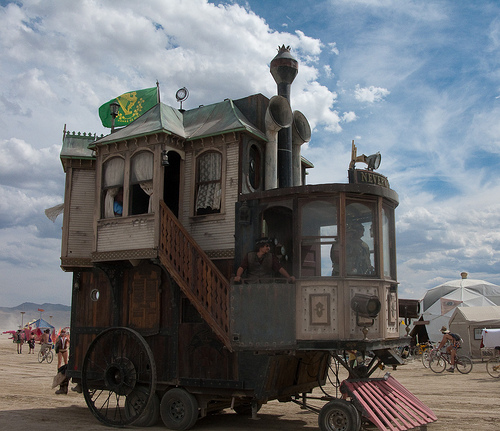 The Neverwas Haul, as should be obvious from looking at it, was inspired by the works of Jules Verne, H.G.Wells, and other science fiction writers who focused on the imaginary technology of that age.  It measures 24 x 24 x 12 feet and is built from the base of a travel trailer.  The newest iteration of the car boasts new interiors, an updated control system and a mini-museum of sorts that showcases numerous Victorian-era wares.  It uses 75% recycled equipment and materials throughout its body, with 100% of them looking absolutely like they came from another time.

While I’ve never been a fan of the imaginary world that spawned people’s unhealthy obsession with steampunk technology, it’s tough not to be swayed by the sheer marvelousness of the Neverwas Haul.  It’s finished the round of art fairs and festivals this year, so you may have to wait for next year’s schedule to see it again.  Alternatively, you can get in contact with the crew at Shipyard Labs, who have it available for rental.

You can check out a ton of photos of the vehicle from Flickr at the link below.