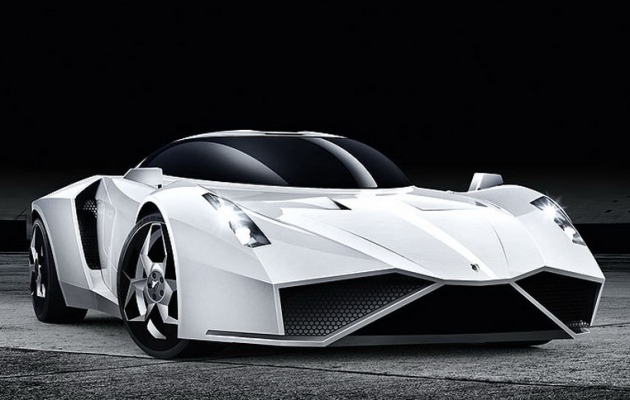 Hey, look, another electric supercar.  And one that makes EVs from Tesla, Fisker and Shelby look like they don’t even deserve to use the name.  The e-Wolf e2 is the latest planned vehicle from the German firm, shamelessly borrowing its shape from playboy-worthy Italian roadburners.

Don’t let your heart race in excitement, yet, as the unapologetically Lambo-inspired 1.2-meter tall number only exists on paper.  Considering that e-Wolf did show off a working electric sportscar at the Frankfurt Motor Show (the e1), they just might have the chops to actually pull off this two-seater beauty.

Planned configuration for the 2,000-lb mains-charging menace involve equipping each wheel with one 134-horsepower electric motor, totalling 536 electric stags with a nasty-sounding 738 lb-ft of torque.  It’s expected to post a top speed of 155 mph, along with a 0 to 60 run up of under four seconds.  Power will be courtesy of a lithium-ion battery pack from CERIO, consisting of 84 flat cells good enough for a 187-mile driving range.  Charging time is ambitious – only 30 minutes.  Of course, I’m ambitious too, but it doesn’t mean I get everything I boastfully set out for.

Ahh, the concept supercar – can’t take them too seriously, but can’t ignore them either.  I mean, how are you not going to pay attention to a gas-free sportscar that looks like that?   The company is looking at a 2011 debut for the eWolf e2, which isn’t that far off in terms of building a production car.  According to e-Wolf, their electric car range, which include the e1 and the planned e2, will  hit the Near East and Japanese markets first.