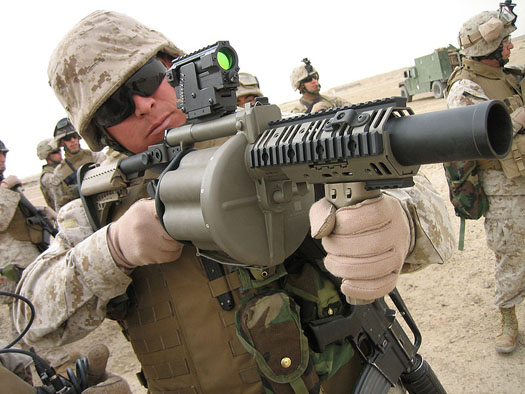 Getting tasered is scary enough.  Having it delivered as a projectile using a grenade launcher is just absolutely freaky.  That freaky bit is exactly what the new Human Electro-Muscular Incapacitation (HEMI) from Taser International does, delivering the familiar electric shock using a projectile that can be hurled over long distances.

Funded by the Pentagon under a $2.5 million contract, the air-soaring, payload-toting “missile” can be fired from a conventional 40-millimeter grenade launcher, allowing it to hit a target just under 200 feet away.  That’s three times further out than Taser’s current long-range XREP shotgun cartridges, making it a potentially useful non-lethal weapon in open fields of battle.

The HEMI, of course, requires a standard grenade launcher to be used, which probably rules out being able to employ it for home security.  Unless your home lies in the middle of a war zone, that is.  If that’s the case, simply pull out your big-ass gun from under your pillow, load your HEMI projectile like a grenade missile and fire the damn thing up.

As of now, they’re testing a variety of noses for the missiles, trying to determine which one will hit with the least destructive impact.  Being a supposedly non-lethal weapon, there’s a huge concern being raised about how “safe” a large projectile jumping at you from over 200 feet actually is.  My guess is it can never be all that gentle.  Maybe it’s time to call it “half-deadly”?