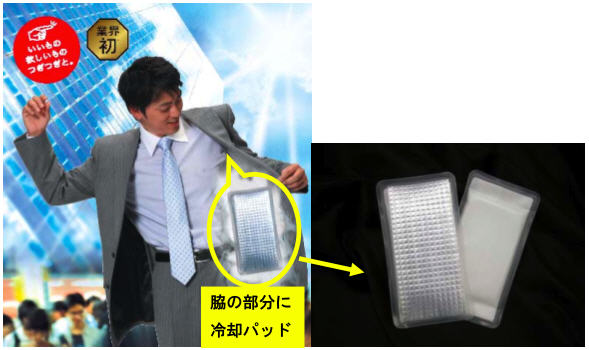 During especially hot summer days, using deodorant is probably not enough to keep the nasty sweating away.  While the rest of the world remedies the problem by doubling their spray (and roll-on) volume, Tokyo finds itself with a subtler, more fashion-forward approach.  Dubbed as the “New Ice Suit,” Japan’s professional crowd gets to don themselves with specially-designed business outfits that boast armpit-cooling power.

Before you go off imagining a technologically-advanced jacket with superhero-like freezing abilities, I’d like to stop you now.  While that will be cool, this suit is about two dozen sensible thoughts away from what you had in mind. Announced by fashion house Haruyama, they’re actually just standard business coats with integrated ice packs right in the places where perspiration typically floods like a busted pipe.

Designed for sweat-heavy business folks, each coat gets two strategically-placed pockets situated near the armpit area.  To provide relief from the soaking heat, each slot comes fitted with cooling gel packs that bring temperature under the suit a tad lower, hopefully enough to keep the sweat from pouring uncontrollably.  The gel packs (which you’re supposed to stow away on a freezer when not in use)  are removable and can be used across all suits that sport similarly-placed inner pockets.

Basically, it lets you sweat less and stink less, all while never having to remove your business formal in order to cool off.  It’s available now for a pretty steep price of $520 (for each set of one suit and two ice packs).