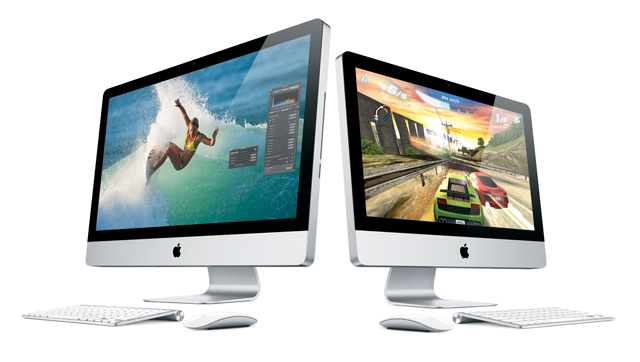 Apple’s new iMacs have arrived and they come bearing gifts.  By gifts, we mean Sandy Bridge chips and that faster Thunderbolt connection.  And, lets face it, these iMacs look sweet, too.

Available in  21.5-inch and 27-inch size options, the sleek all-in-one computers feature that same aluminum enclosure that have left life-long PC drones (read: me) mesmerized at their utter beauty.  That same striking design is now paired with faster processors, more powerful graphics and, of course, the miniDisplay-replacement Thunderbolt I/O technology (one port for the 21.5-incher and two for the 27-inch model).

The entry-level iMac will get you a 2.5Ghz quad-core i5 processor, AMD Radeon HD 6750M with 512MB of GDDR5 (Apple claims this is a 3X improvement over the previous generation), a 500GB HDD, a Facetime HD webcam, Magic Trackpad, Apple Wireless Keyboard and a smattering of ports (USB, SD card, ethernet, Thunderbolt).  At the high end, you can graduate the specs to a 3.4GHz core i7 chip, a similar GPU with 2GB of GDDR5 and a 2TB HDD (or a 256GB SSD).

Basically, it’s the same pretty all-in-one machine with beefier hardware that you’re not supposed to just open up and upgrade yourself when you feel like it.  If that’s your thing, you can pick one up now, with prices starting at $1,199.99.