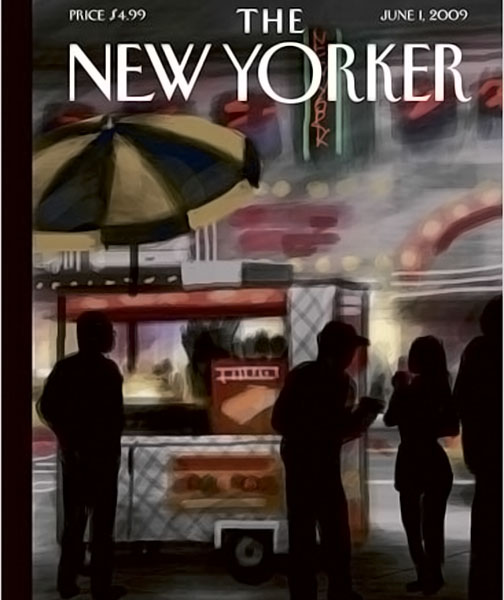 How good of a platform could a small gadget like a phone be for graphic art?  Pretty good, as it turns out.  The June 1st cover of the The New Yorker features a finger-painted digital art done entirely on the iPhone.

Using nothing but the handset’s multi-touch capabilities and a $4.99 app called Brushes, artist Jorge Colombo drew the entire work in a total of one hour, which depicts a typical scene outside Madame Tussaud’s Wax Museum in Times Square.   When the phone first came out, who would have suspected it can turn out anything this lovely?

There is, for sure, some symbolism in the decision to slap an iPhone-created piece of art on the cover of such a touted publication.  After all, there really is something magical about a technology that can allow for something as intricate to be produced in a grand total of sixty minutes, while sitting snugly in the palm of your hand.

I have never used Brushes and, while I’ve enjoyed playing with PC-based art software in the past, I never even considered using a touchscreen handset for finger-painting.  How can you resist playing around with it, now, though?  If you’re curious about how the process went, the artist recorded the entire session from start to finish using the app’s companion recorder, Brushes Viewer.   You can check out the video here.