Like coming over to your friends’ crib to play Rock Band, but are absolutely embarrassed to be seen carrying one of those silly guitars around?  Not a problem with the NEXiLUX Retractable Wireless Mini-Guitar,  a full-featured guitar controller that can conveniently bundle into a small pouch.  That way, nobody has to know of your geeky, little secret.

Designed to work with all Guitar Hero and Rock Band titles on the Wii, PS2 and PS3, the gaming accessory comes in two detachable parts: the guitar base and a retractable neck.  During gameplay, simply pull the neck to full size and attach it to  the base to start regular rhythm action. 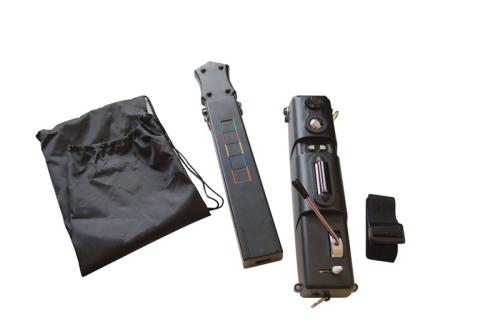 To keep itself small, the NEXiLUX Mini-Guitar comes without a proper body.  Instead, the base is barely wider than the neck, but incorporates all requisite controls, including an elongated strum bar, a whammy bar, a five-way switch (for Rock Band use), thumb stick and a directional pad, along with the SELECT and START buttons.  The neck has both the set of five colored fret buttons and a five-button touch-sensitive slider strip for those intense solos on Guitar Hero World Tour.  Internal battery features an auto-sleep mode for conserving juice that automatically turns the controller off after some period of inactivity.

We don’t have numbers of the actual dimensions, but based on the usual sizes of guitar controllers, it should be really small, disassembling into two pieces that are about one-third the length of your typical Rock Band guitar each.  Yes, that means you can slip it into a backpack and carry it around, without having old people look at you like an absolute disappointment.

The NEXiLUX Retractable Wireless Mini-Guitar comes in two colors (black and white) and retails for $49.99.