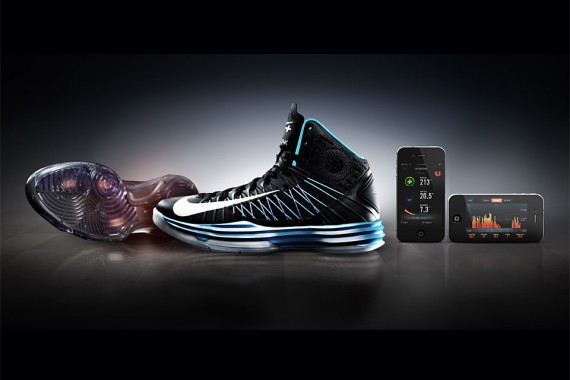 Nike’s upcoming FuelBand should bring the benefits of Nike+ to athletes who engage in sports other than running.  If you’ve been planning to use it strictly for the basketball court, though, you may just want to pick up a Nike+ Basketball shoe, which  works together with an iOS app to track “how high, how hard and how quick” you’re doing.

Each shoe gets a Nike+ Pressure Sensor built into it, collecting data about the user’s movement and sending it wirelessly to their mobile gadget.  The app then translates the data into a variety of metrics to give users specific goals and challenges to complete during their next training.

For now, Nike doesn’t specify exactly what types of data are recorded, but we’re guessing it will involve data that plays into your speed, footwork and jumping abilities while on the hardcourt.  We’re not sure what kinds of sensors will exactly be fitted, so it could be anything.   They do talk about a feature called “Showcase” mode, which lets players record their strides during a dunk, data from which can be superimposed onto a video, which sounds all loads of fun. One request: please make sure footwork is on there, since that’s, pretty much, the one thing other fitness monitors aren’t really trying to do.

The first pair of kicks in the Nike+ Basketball line will be the Nike Hyperdunk+, which debuts in stores this coming June.  No pricing has been announced, but expect a slight premium for the extra hardware involved.