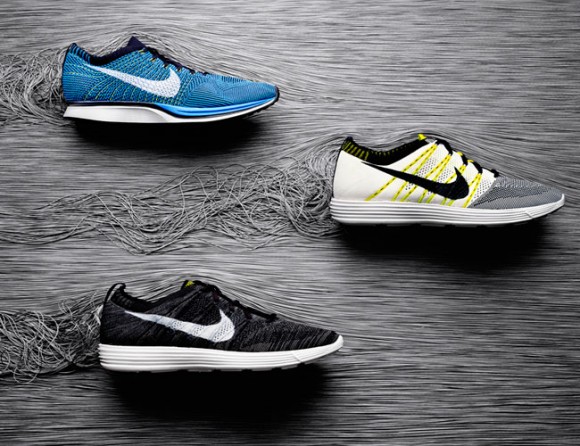 Running shoes, they are getting lighter.  And we’re betting there are few kicks out there lighter than the shoes using Nike’s brand new Flyknit technology.

Designed to minimize the use of materials, the technology precisely engineers yarn and fabric variations, such that the least amount necessary is used to provide sufficient support.  Nike bills the uppers, which features all the structure and support knitted in, as “featherweight, form-fitting and virtually seamless.”

The Nike Flyknit Racer is the first to use the tech, which boasts 19% less weight than the company’s former marathon favorite, the Zoom Streak 3.  Similarly built for distance runners, the footwear weighs a ridiculously light 5.6 ounces for a size 9, with the upper and tongue combining for just 1.2 ounces.  Because it’s designed to provide a precise fit, Nike claims the shoes will feel more like second skin than actual footwear.  The model should debut in the feet of runners from all over the world in London this summer.

Nike also introduced the Flyknit Trainer+, which uses the same minimalist styling as the Racer.  Unlike it, though, the model is designed for everyday runs and weighs just slightly more at 7.7 ounces for a size 9.