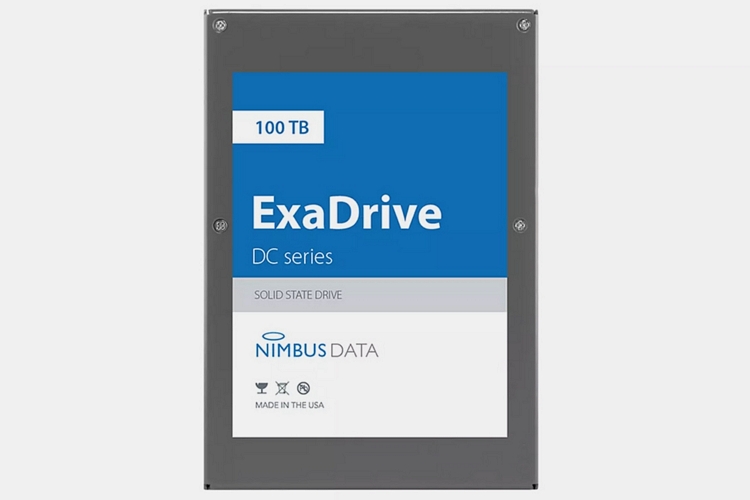 We don’t know how far we can push the capacity for 3.5- and 2.5-inch drives, but I seriously didn’t think they can make a jump as big as Nimbus Data just did with their newest release. Called the Nimbus ExaDrive DC100, the SSD comes with a whopping 100TB of storage.

That’s right, there’s now a 100TB SSD drive unit that you can use to store endless gobs of 4K and 8K video. Well, if you can afford it anyway, since, as with many nascent technologies, this is aimed at enterprise customers like data centers who would like to add storage capacity without adding any extra racks to their warehouses.

The Nimbus ExaDrive DC100 is a 3.5-inch SSD with a legit 100TB of storage, making it the highest capacity SSD in existence. Well, at least for now, since some other company seems to come up with something bigger in a few months’ time anyway. At any rate, 100TB is a huge achievement, since it’s over three times the capacity of the nearest competitor (Samsung’s 30TB SSD), which previously held the SSD capacity record. It achieves the unique capacity by using a patent-pending multiprocessor architecture that, according to the outfit, can handle much greater storage than traditional monolithic flash controllers. Nimbus says, by the way, that it’s enough storage to keep 20 million songs or 20,000 1080p movies, allowing you to stash an entire media library in a single pocket-size box.

Aside from the impressive size, the SSD also draws 85 percent less power per terabyte than competing enterprise SSDs, helping reduce the total cost for ownership by an impressive 42 percent. Unlike most large-capacity SSDs we’ve seen, this model doesn’t retain the ultra-fast read and write speeds SSDs are famous for. Instead, it’s been engineered to optimize capacity over everything else, including speed. As such, it won’t post the same read and write speed numbers as the fastest enterprise SSDs, although with 100,000 IOPS (input output per second) and up to 500MBps throughput, it really isn’t all that lacking, either.

The Nimbus ExaDrive DC100 comes in the traditional 3.5-inch form factor as traditional hard drives, along with a standard SATA interface, which should make it compatible with most common storage and server platforms. It uses embedded capacitors to protect buffered data in the event of power loss, so it should be duly equipped to handle the processing of important information. And, yes, you can also integrate it into your own setups (I mean, who wouldn’t want 100TB of space in their gaming PCs), provided you can afford the ridiculous price tag that accompanies these enterprise storage solutions.

Aside from the ExaDrive DC100, Nimbus is also releasing a 50TB model (DC50), which uses the same architecture as the 100TB model. Both are slated for availability in the summer. No pricing has been announced, but the outfit says it will be priced along the same range as current enterprise SSDs on a per terabyte basis.