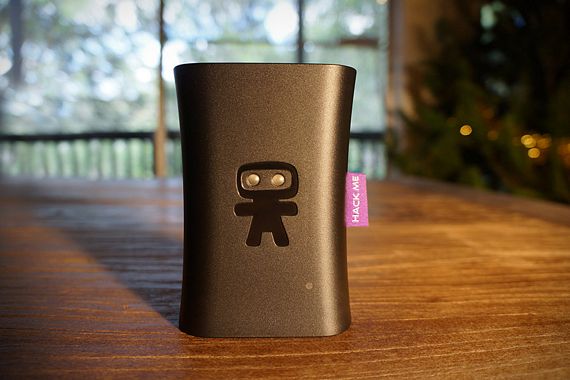 Want to hook up your home to your smartphone, but don’t want to pay through the nose for a prepackaged home automation solution?  Set up your own smart home with the Ninja Blocks.

A compact piece of electronic appliance that pairs with your smartphone, it’s designed for use with a host of sensors and actuators that can be set to monitor and control a variety of things around the house straight from your handset’s tiny display. Granted, it won’t be a plug-and-play affair compared to having professionals install a proper home automation system — if you’re willing to do a little coding, though, you can do a whole load of stuff at a mere fraction of the cost.

Ninja Blocks are small, cloud-enabled computers powered by a BeagleBone running Ubuntu Linux, allowing folks to hack and customize the whole thing with a little programming work.  The computer itself has no onboard sensors or actuators, but they do sell a variety of them that you can, then, program for a variety of uses — there’s a temperature and humidity sensor, a motion sensor, a button, a window and door sensor, and a host of remote control sockets.

Which sensor and actuator you pick up, of course, depends on what kind of automation you want to do at home.  Want to monitor the temperature in your wine cellar?  Put one those temperature and humidity sensors inside and see the readings from your phone any time you get an inkling.  Want to know when someone’s at the door while you practice your drums in the basement?  Install one of those wireless buttons in place of your doorbell and have it send a notification to your phone when pressed.  And so on.

If you’re not into coding, it’s not a problem.  They offer three apps (Remote, Security and Thermometer) that, on their own, let you do a whole load of things already using simple rule-setting logic.  The Ninja Blocks ship this March, priced at $199.