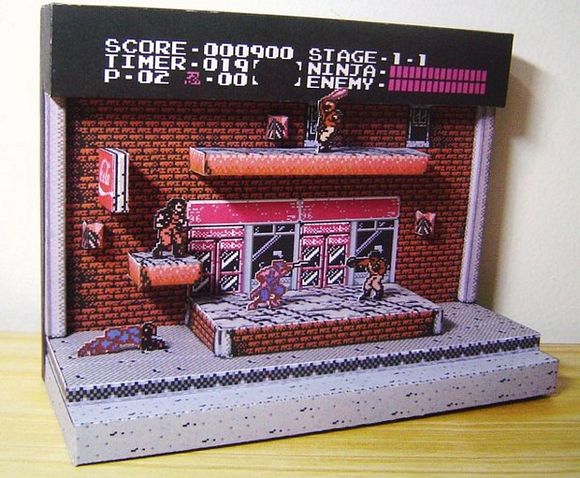 If building a papercraft New York City isn’t the kind of low-tech thrill you’re looking for, maybe this videogame-based diorama will spur you into action. Based on a scene from the classic Ninja Gaiden series on the NES, it’s one of the coolest 3D (okay, 2.5D) visual feasts I’ve seen in a while.

While we’re not sure where it’s from (a certain MisterManolo is credited on the actual PDF sheet), there’s no denying how interesting of a project it will be to put together, whether you geek out on classic ROMs all day or couldn’t care less. It’s undeniably a nice tabletop display, apart from declaring your undying love for 2D games and (in case you actually like it) papercraft.

Simply download the Ninja Gaiden Diorama PDF (link below), print it out (in color, of course) and follow the rest of the illustrated instructions. Like most papercraft designs, you should cut out the shapes, slice off the lines and put each connecting end wherever it’s supposed to go. The diorama includes the Ninja Gaiden start screen (at the back), scores up top and two sets of characters (Ryu in climbing and fighting poses along with four different enemy figures). Characters can be deployed either on the street or one of the three flat elevations.

It’s rare to find someone who sports both a geeky taste for old-school games and a commendable knack at designing papercraft. If you do, how about crafting some more awesome dioramas and paper models like this one?