Ninja Sword Pen: The Pen Is No Longer Mightier Than The Sword 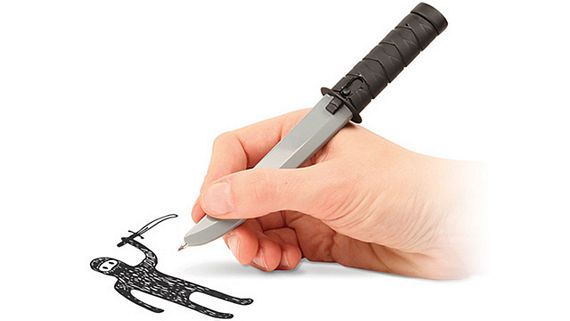 Ninjas get no respect.  I mean, how can a large part of the world actually subscribe to the whole “the pen is mightier than the sword” when ninja weapons will obviously crush anyone who dares come at them with a Bic in hand?  At any rate, we can put an end to that tired adage now with the Ninja Sword Pen, a writing instrument housed inside a miniature katana.  Yes, it’s a pen that’s also a sword.

While it’s not actually a real bladed weapon (more like a knife-sized toy katana), it should be perfectly functional as a writing instrument.  After all, ninjas need to write stuff, too.  How else are they supposed to write checks when paying for dry cleaning on their ninja suits and stuff?

The Ninja Sword Pen’s katana body is actually just plastic, so don’t pull this out in an alley fight and hope to have any chance of hurting your opponents.  Do pull it out, however, if you want to scribble your last will and testament before you get knifed down.  I mean, you have to do it sometime, might as well be now.  Oh yeah, the pen itself has a medium tip ball point, black ink and takes D1 refills.  It measures 6 inches long.

Not enough to entice you away from your Sharpie Liquid Pencil?  Well, that’s why they threw in a SHHING sound effect — just like the sound swords make when ninjas swing them at whoever they’re assassinating.  Just turn on the sound (requires three LR41 batteries) and imagine yourself slaying dragons.  Or samurais.  Or whatever it is ninjas actually battle with these days.

Perpetual Kid has the Ninja Sword Pen, priced at $5.99.