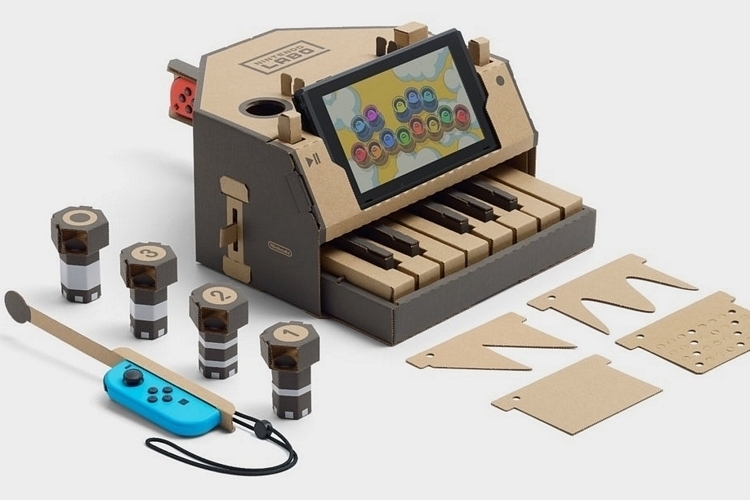 Among the three major game console makers, Nintendo has always been the one who tended to veer towards the less-beaten path. They did it successfully with the Wii. They did it less successfully with the Wii U. Last year, they triumphantly did it again with the Switch. This year, the unconventional game console is getting accessories in the form of the Nintendo Labo. And, yes, they’re just as unconventional as the gaming rig that spawned them.

DIY cardboard toys – that, in a nutshell, are what the new accessories are. Unlike the random cardboard toys you can get off a shelf, though, these are meant to work with Nintendo’s current-gen console, serving as a primary control mechanism for a variety of bundled games. We know, cardboard as an accessory for a modern game console sounds ridiculous, but this is Nintendo we’re talking about. Somehow, someway, these guys can make what sounds ridiculous just a whole lot of fun. 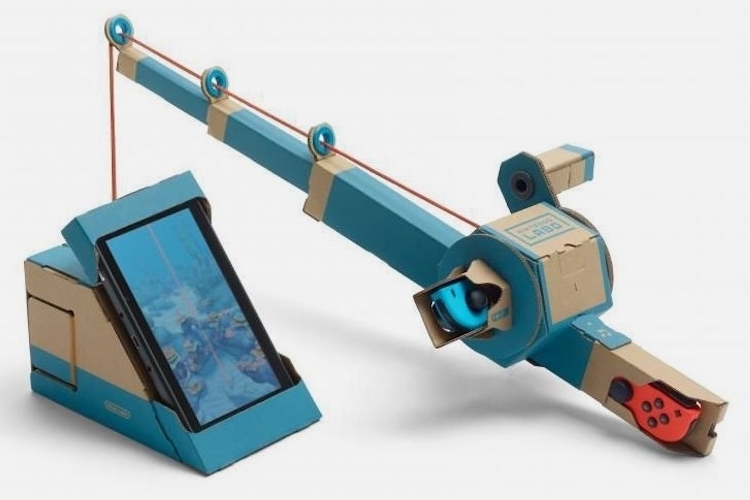 Each Nintendo Labo set consists of pre-cut pieces of cardboard and string that you assemble together, along with companion software that includes games and instructional content. Follow the instructions to cobble the toy together, then place the console’s tablet and Joy-Con components into their designated slots on the accessory. That’s it. From there, you just play. Gameplay, of course, varies depending on the toy, which, we guess, is what makes the addition of these cardboard components so much fun.

Some of the toys, which Nintendo are calling Toy-Cons, are incredibly simple. Others are a little more complicated, complete with plenty of moving parts (the strings, pretty much, facilitates most of the movement). Yep, most of the cardboard creations will have moving parts, which makes this quite a good introduction to some basic engineering concepts, too. 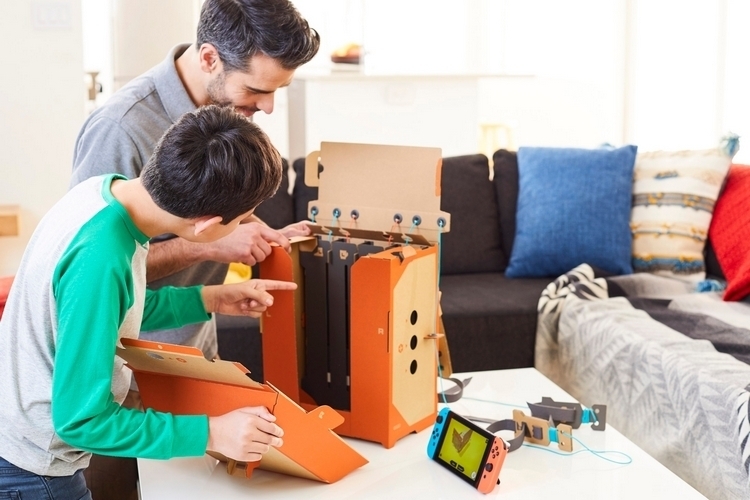 What kind of toys can you build using the Nintendo Labo? With the introductory sets slated to release in April, these are the accessories we’ve seen so far:

This is a simple car with slots on the sides for the Joy-Con gamepads, which you control using the Switch’s screen. There’s no motor. Instead, the vehicle is propelled by vibrations from the Joy-Cons, which work surprisingly well at sending it careening across a flat surface. Yes, the gamepad’s vibrations also control the toy car’s steering, allowing you to maneuver it in a surprisingly accurate manner.

This is a telescoping toy fishing rod with a Joy-Con docked on a working reel that you can rotate to take your catch out of the water. There’s no actual water, of course. Instead, the fishing line is attached to a cradle that holds the Nintendo Switch console, where a system of strings and rubber bands provide realistic tension, forcing you to tug the rod upward and crank that reel with some elbow grease in order to complete a catch. The docked Joy-Con, by the way, is there to alert the player, vibrating as soon as a fish takes the bait. 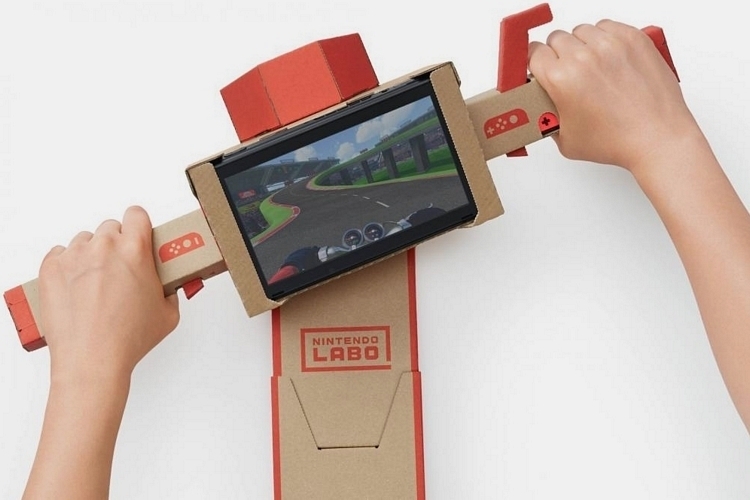 A handlebar accessory, it has a dock at the center for the Switch display, along with slots on each grip for one Joy-Con each. Launch the moto-racing game, press the ignition button to start the engine, and twist the right handle to activate the throttle, then use the handlebars to maneuver your way through the various circuits. According to Nintendo, you can also lean your body in the desired direction to control the steering.

It’s a small toy house that uses the Switch screen as the home interior, with holes on the sides and bottom allowing players to insert various items as a way of interacting with the game. We’re not entirely sure how this one plays, but we imagine Nintendo can write a bunch of mini-games that uses this type of platform.

A playable 13-key piano, the miniature keyboard has a dock at the top of the keys (where sheet music will usually go) for the Switch screen, along with a dock in the back for a Joy-Con. The Joy-Con’s camera, basically, peers inside the keyboard, looking at which keys you’re striking and what controls you’re adjusting. This relays input to the game, which then carries out the appropriate response. Using this simple system, the game is able to play the exact notes you’re striking at the exact tone and pitch you’re expecting. You can also experiment by inserting your own custom knobs, at which point the game will alter the sound based on the shape of the cardboard inserted (we know, it’s going to be hit or miss). 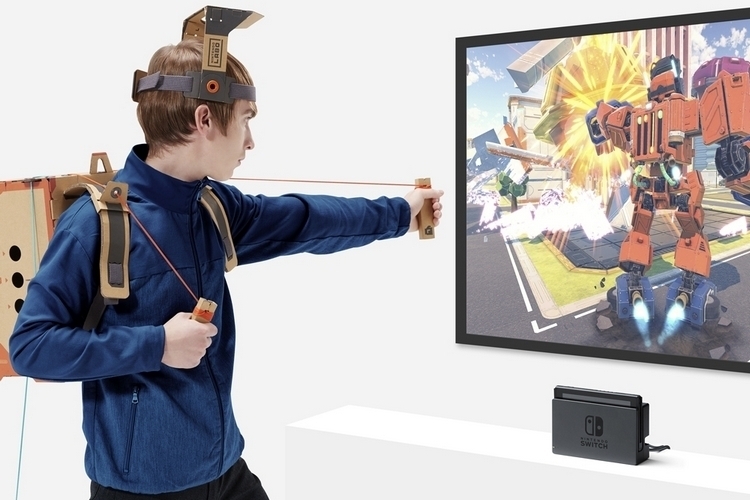 With this set, you create a wearable mech suit that a player can put on as a means of controlling an in-game robot. That’s right, the robot in the game will follow all of your actions, provided you’re wearing the suit the entire time. It consists of two components: a backpack and a visor, each of which get one Joy-Con docked into them. The backpack is actually attached not just to your shoulders but to your feet and hands, which allow the system to recognize the exact movements your body is making (it can recognize when you punch and kick, for instance), while the visor takes charge of tracking head movement.

From the looks of it, the cardboard toys appear to be sturdy and well-designed, so they won’t quite break down as easily as many cardboard toys. Of course, considering how kids play, these will be jumped on and sat on in no time. Luckily, the toys are designed such that they will continue working even after you patch them up with tape or glue. Plus, since it’s cardboard, it should be pretty easy to make replacement parts – just trace the exact part you want on a sheet of corrugated cardboard and slice it up. From what we heard, Nintendo will also allow people to create the cardboard cutouts themselves, which means they’ll make the designs available for download. Of course, you’ll still have to buy the games, which are actually the bulk of the expense.

As with many things Nintendo does, opinion seems split. Some people seem to like the idea of bringing things back to something basic like cardboard at a time when the Xbox One and the PS4 seem to be focused entirely on either 4K or VR. Others think it’s more gimmick than innovation. Then again, plenty of people said the same about the Wii and its crazy motion controls back in the day. 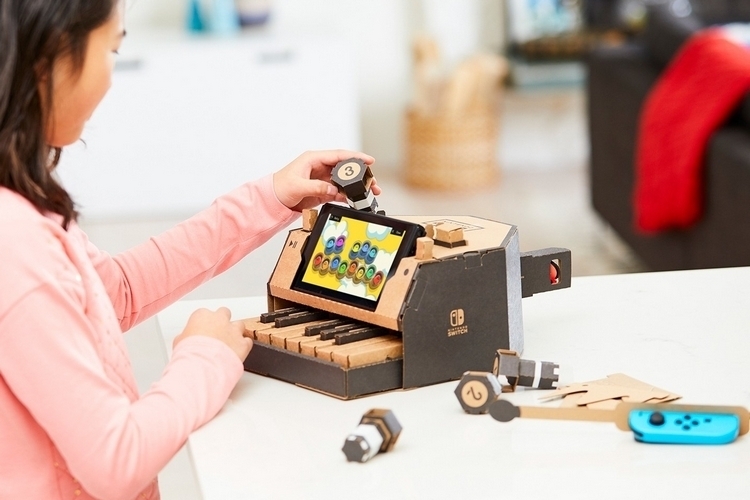