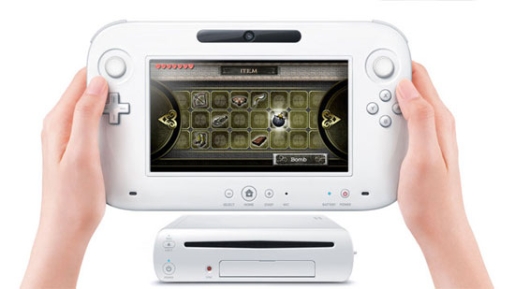 Nintendo’s successor to the very successful Wii, the new console features a smorgasbord of technology that could be as confusing as it is impressive. And just like the Wii before it, the company is shaking things up once again with an innovative approach to gaming that could end up as unique and revolutionary.

The Nintendo Wii U’s actual console hardware seems regular enough. Measuring 1.8 x 6.8 x 10.5 inches, the boxy case packs a custom multicore chip from IBM and a GPU from AMD, bringing it on par (at least) with the current processing muscle of the Xbox 360 and the PS3. It has a self-loading optical bay (backward compatible with old Wii games), 8GB of flash storage, an HDMI out, an AV multi-out connector, SD card expansion and four USB ports (with support for external USB storage). Up to four controllers can interface with the machine at any one time, which is compatible with all existing Wii input devices.

The big story, though, is the new controller, which is like a handheld gaming system all on its own. Incorporating both touch and button controls, it sports a 6.2-inch touchscreen display, flanked by two analog sticks, one d-pad, four face buttons, two shoulder buttons and two triggers. There’s also a front-facing camera, onboard mic, an accelerometer and a gyroscope. As you can imagine, the tablet-like controller makes for entirely unique gameplay mechanics, especially since the small screen can be configured to show a different image than what’s on TV.

Nintendo will be releasing the Wii U sometime in 2012. No word on pricing yet, but expect it to be a lot more expensive than when the Wii first came out, since the controller alone should cost a good chunk of money.