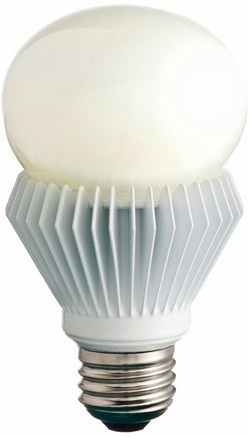 Cree is among the contingent that’s been pimping LEDs as the true long-term replacement for light bulbs, rather than the currently dominant CFLs.  With the company’s latest 60-watt light bulb, they just might have a really strong case for that position.

Billed as the “first no-compromise replacement for a 60-watt incandescent bulb,” the new prototype lighting unit manages to meet Energy Star performance requirements, all while being the “brightest, most-efficient, LED-based A-lamp” in the category.  According to the press release, it “emits a beautiful, warm, incandescent-like color of 2700 K, with a CRI of at least 90.”  In layman’s terms, that should mean your lighting doesn’t require any adjustment on your part — it’s as illuminating, familiar and usable  as the output of whatever technologically-inferior light bulb you currently use.

The new bulb delivers over 800 lumens, all while consuming less than 10 watts of power. You can do the utility bill math for that one — I won’t, since working with numbers gives me a headache.  It can also be dimmed, making it ideal for use anywhere in the house.

Like we said, though, this is only a prototype bulb and has only been recently submitted to third parties for testing (which should validate the light distribution, lumen maintenance and performance).  No word yet on how and when it will be brought to market.  Expect pricing to be on the high end, however, since this will likely be the kind of bulb you won’t need to replace for a long, long time.