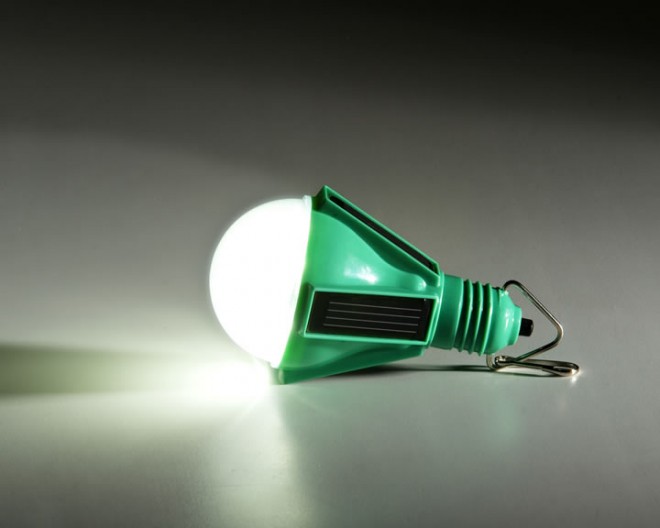 A solar-powered light bulb, a running joke from years past, is now a reality.  And it’s not trying to be funny – the Nokero Solar Light Bulb really draws its power for lighting itself from the sun.  Except, instead of being used outdoors during daylight as the joke would have it, it stores the generated energy into an onboard battery, so you can use it indoors later.

Actually, calling itself a light bulb is sort of misleading.  It actually works like one of those solar-powered lamps, marketing itself as a safer, smarter replacement to old-school kerosene lanterns.  To it’s credit, it does seem much smaller than fuller-sized lamps.

The Nokero Solar Light Bulb is a 5-LED bulb screwed into its own socket, which feature four small solar panels and a built-in NiMH battery.  Measuring 5 x 2.75 inches (h x d), it comes with a hook on the end, so you can hang it overhead, both during use and while charging outside in the daylight.

Because of the small size, battery is underpowered.  On a full charge, it can only deliver lighting for up to four hours (and can typically just do two hours on a full day’s charging), which means it’s strictly for emergency use.  The batteries can last up to two years and are replaceable, while the bulbs can be removed and used in a regular electrical socket, in case the one in the bathroom conks out.  Oh yeah, the whole assembly is rain-proof, so you don’t have to worry leaving it out in unpredictable weather.

In case a rather underpowered emergency lamp appeals to you, the Nokero Solar Light Bulb is available for $15 each.  They do give extra discounts to orders of three or more.