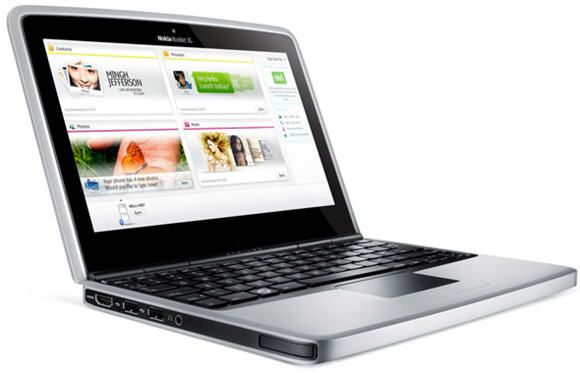 After teasing fans the week before, Nokia has finally released full specs for their upcoming Booklet 3G during yesterday’s Nokia World event.  While we can debate the company’s claim that it’s a “mini-laptop and not a netbook” till our eyes bleed, we’d rather just fill you in on the full features of the undeniably attractive machine.

Looking like a pint-sized MacBook (seriously), it’s easy to see the aesthetics Nokia was going for.  With 0.78-inch slim lines, machined aluminum body and ridiculously high price point, the whole thing is a nod to Apple design.  Considering that it’s a Windows netbook, though, that might be pushing it a little bit (even if it is running Windows 7).

The Nokia Booklet 3G’s most prominent feature is easily the 12 hours usage time that the company is touting.  It’s a capability that remains to be seen and, in all honesty, most people are skeptical about.  Specs include a 10.1-inch LCD (1280 x 720 pixels),  a 1.6GHz Intel Atom Z530 processor, Intel Poulsbo US15W chipset, 1GB of RAM (non-expandable), 120GB HDD, an onboard accelerometer, Wi-Fi 802.11 b/g/n, Bluetooth 2.1, 3G HSPA modem with a hot-swappable SIM bay, aGPS and a 1.3 megapixel webcam.

It’s a handsome piece of hardware, with build quality that looks impressive.  However, the hardware set pretty much guarantees this will be almost entirely a work machine (thus, the 12-hour promise).  The connectivity is quite impressive, though, and I can definitely see myself trading in a smartphone for one  instead (plus a small dumb phone for voice calls).

The Nokia Booklet 3G is being pegged for a considerably high €575 ($818) price tag, with some of the amount likely to be subsidized by mobile carriers.  I say bring down the price a tad and we’ll talk.  You guys are just being silly.