NomadClip: This Carabiner Doubles As A Charging Cable 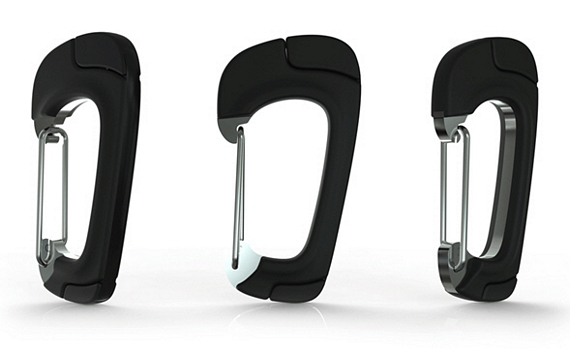 From bracelets to cards to Swiss army knives, there’s no shortage of alternatives to charging cables that offer better portability.  A new one called NomadClip has to be one of my favorites, taking the form of an erstwhile carabiner.

Designed to eliminate the mess of wires while making it difficult to lose, the accessory can clip to anything a regular carabiner would.  Like your keychain.  Or a zipper on your backpack.   Or in one of your belt loops.  Once clipped, that’s where it will stay, minimizing the chances you’ll misplace it throughout the course of the day.

The NomadClip isn’t just a flimsy novelty carabiner, either.  While you can’t use it for climbing (it’s not rated for bearing heavy weights), it’s constructed with a tough steel frame and a Bayer Science polycarbonate shell that’s strong enough for less intense uses, such as holding tied stuff together, clipping shoes to your yoga bag, or serve as an emergency belt (just use it to hook two loops or something) when the one you’re wearing gets stolen while you’re using the public toilet at a gas station (yeah, your Dad was right — buying a $200 belt was a horrible idea).

The connectors themselves aren’t on the carabiner.  Instead, they’re on a cable that can be partially pulled out of the carabiner’s frame, making it easy enough to plug into a charged USB and your phone without any weird maneuvering.  It can be ordered either with a microUSB plug or a Lightning connector.

Slated to ship November 30, the NomadClip is now available for preorder.  Price is $39.