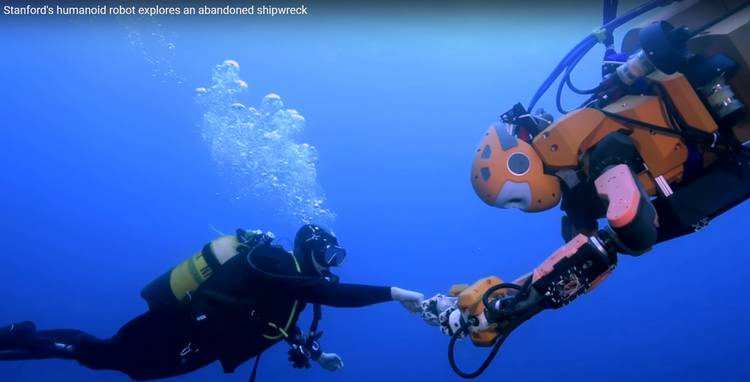 Treasure-hunting deep in the ocean? Awesome. Actually diving yourself and sifting through wreckage? Still awesome, but it will probably kill you. So why not let the robots do it? That’s exactly what OceanOne did for its human overlords recently and, yes, it’s awesome.

A humanoid robotic diver developed in Stanford University, the automaton dove 100 meters deep into the Mediterranean at the site of the sunken La Lune, King Louis XIV’s flagship, which went down back in 1664. No human had previously been able to touch the ruins, which the robot expertly sifted through with help from its human operators (the robot can swim and operate autonomously, but operators are allowed to override actions if the robot reads situations incorrectly).

OceanOne is actually more mermaid-like in form, with a body that’s optimized for the water, so it can’t waddle to the beach and walk over to the bar like you normally do when you’re on vacation. Measuring five feet tall, it provides operators with stereoscopic vision through cameras on the head, while it reaches for stuff using two fully-articulated arms. Unlike most robots that use pincers for grabbing, it’s outfitted with multi-fingered hands, along with a fully-articulated wrist that’s outfitted with force sensors to provide haptic feedback to the operator. The robot itself can adjust its grip, depending on its reading of the object (e.g. if it’s firm and heavy, it grabs tight), with the human operator able to make adjustments depending on the haptic feedback.

Aside from mining pirate treasure, the robot is expected to be a highly-valuable tool for coral reef research. It’s especially valuable because of its gripping ability, which it can adjust to a very light hold to avoid damaging delicate coral reef.

You can learn more about OceanOne from the Stanford website.